Asia's connection to cannabis stretches back thousands of years, but the list of Asian-owned pot businesses in Colorado is short. Maria Levitov
When Jimmy Nguyen attends work conferences in Colorado, he's forcibly reminded of his individuality. A second-generation Vietnamese-American, Nguyen is one of a handful of Asian-Americans who owns a business in the state's cannabis industry, where his demographic is apparently too small to be counted.

According to a 2020 survey paid for by the City of Denver, 0 percent of local licensed cannabis business owners identified as Asian. A statewide survey conducted by the Colorado Marijuana Enforcement Division in 2018 included "Asian" as an option to choose for race identification, but it didn't even appear in the final data analysis; in that survey, 88 percent of owners identified as white.

Both surveys noted that over 25 percent of business owners didn't disclose their race, however, and the surveys only included marijuana businesses that touch the plant, not ancillary marijuana businesses like Nguyen's, which performs licensing consulting. Still, Nguyen says he's met only two other Asian cannabis business owners during his six years in Colorado's cannabis industry, and isn't sure if one of of those businesses is still operating.

He sees a lot more diversity when he's working in California, specifically with Asian business owners. "There's just a larger Asian population in general, and a longer history of cannabis use in California," Nguyen explains. "There's a distinction between ownership and representation in general for Asian-Americans in cannabis, but I think both are quite low here."

According to 2019 Census Bureau data, 3.5 percent of Colorado's total population identified as Asian, with 4.4 percent in Denver. Until those numbers go up, Nguyen doesn't expect much to change in the state's cannabis industry, but he says that small numbers isn't the only factor impacting Asian-American participation in the state's cannabis industry.

"When you look at Asian-Americans — now, obviously there are differences in ethnicity and where we're from — we have to deal with different standards and social norms," Nguyen says. "Most of these folks are coming to America in their first few generations, and lot of these countries they're coming from have strict drug policy. My mom came over from Vietnam in 1980, and you can still get a death penalty for cannabis there."

Such strict cannabis policies aren't exclusive to Vietnam, notes Melanie Rodgers, a Philippine-American living in Denver. Rodgers runs a marketing agency and social advocacy group for criminal justice reform that focuses on medical marijuana and psilocybin — both of which would earn a consumer prison time and possibly even worse in the Philippines, where drug use and possession can also carry the death penalty.

"Filipinos are typically very Catholic, religious and disciplinary. If you look up the nurse force, there are a lot of Filipinos in it," Rodgers explains. "Cannabis not getting recognition from the FDA and American Nurses Association, that still leaves a stigma for it to not be considered true medicine."

Fear of pot-related punishment ran so deep with Nguyen's mother that he initially hid his connection to the cannabis industry from her, and after he revealed what he did for a living, they didn't speak for almost a year, he recalls. But once Nguyen learned more about his mother's concerns, he realized that they were rooted in decades of marijuana mis-education and the sacrifices that first-generation immigrants make for their children.

"When I told her, it was fascinating, because everything she was saying to me was just decades and decades of propaganda from the War on Drugs — not just where we came from, but here, as well," he remembers. "She didn't take all of those risks to come to America for me to 'go and find myself,' and I don't take that for granted.  But it gives me a different perspective to what I'm doing. It gives me even more of a drive to make sure what I'm doing is a good example."

Rodgers, too, spent hours doing medical marijuana research and then sharing it with her parents before they came around, she notes.

Still, both she and Nguyen believe that the low percentage of Asian Americans in Colorado accounts for the lack of representation in this state's cannabis industry. But they also point out that the industry could be responsible for bringing more Asians to the state as business owners and employees, and would benefit from recognizing the Asian populations they serve in Aurora and Denver. 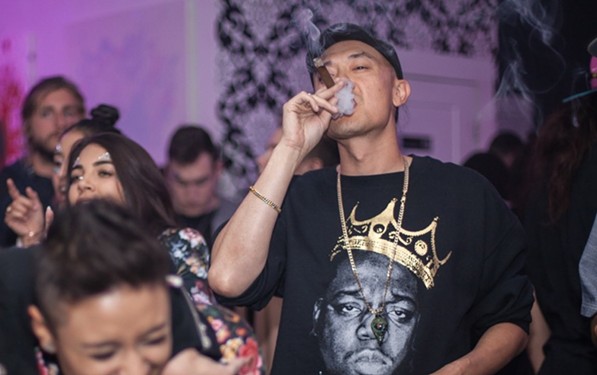 Christopher Louie moved to Colorado to participate in the state's cannabis industry/
Jacqueline Collins
Christopher Louie and his wife, Chongsi Chang, moved to Colorado from New York about three years ago to start a venture in the industry. Their business, Made in Xiaolin, is an Evergreen-based cannabis cigar maker, selling luxury pre-rolled cannagars with a blend of Chinese and East Coast branding, playing off Louie's love for his heritage, hip-hop and gangster movies.

Since moving to Colorado, Louie says he hasn't sensed any negative treatment because of his ethnicity, but he has felt lonely. "We were used to seeing a lot of Asians, coming from New York," Louie says. "The first thing I looked for when I got here was a Chinatown. I was surprised to not find one."

Through their cannagar business, though, Louie and Chang are reminding consumers of Asia's connection to the plant, which stretches back at least 2,500 years to the first recorded weed-smoking session in China. To make their deluxe blunts, Made in Xialon compresses cannabis flower on a stick, drizzling it with hash oil and wrapping it in a cannabis leaf before pulling the stick out; the result is similar to Thai sticks, the infamous compressed cannabis cigars long made by tribes in northeast Thailand.

"We're proud to represent the Asian community. When the population isn't there, what else are you supposed to do?" Louie wonders.

Early cannabis strains and extraction techniques from Asia have helped shape pot use around the world; Nguyen, Rodgers and Louie are all well aware of an early Eastern movement toward medical marijuana. According to Nguyen, much of the cannabis grown in British Columbia, Canada and the Pacific Northwest is thanks to Vietnam War veterans returning home with cannabis seeds.

"There's definitely that tradition of Eastern Asian medicine at play here. We're a lot closer to cannabis than we think," Nguyen adds.

Rodgers believes that Colorado's cannabis industry could do a better job of promoting diversity within itself, pointing to social equity programs, networking events targeting people of color, and more employment of workers who reflect the communities in which they operate as potential paths to improvement; she points to such opportunities in neighborhoods in north Aurora and off Federal Boulevard in west Denver.

"When you walk into a room and nobody looks like you, there's kind of an assumption made," Rodgers says. "It's great that we're starting to talk about it, but I would love to see more efforts. I've gone to so many network events and conferences in this space [across the country] to talk about this, just to see groups of white people always talking about the topic."
KEEP WESTWORD FREE... Since we started Westword, it has been defined as the free, independent voice of Denver, and we'd like to keep it that way. With local media under siege, it's more important than ever for us to rally support behind funding our local journalism. You can help by participating in our "I Support" program, allowing us to keep offering readers access to our incisive coverage of local news, food and culture with no paywalls.
Make a one-time donation today for as little as $1.