Jacqueline Collins
Hailed as one of the most comprehensive reports of its kind by both pro- and anti-legalization groups, the Colorado Division of Criminal Justice's “Impacts on Marijuana Legalization in Colorado” study digs into data surrounding youth use, impaired driving, crime, tax dollars and more potential effects that legal pot has had on the state.

Even so, the report's authors called the majority of its findings "baseline and preliminary" because of a lack of contextual data on issues such as impaired driving and marijuana-related arrests before legalization.

"The information presented here should be interpreted with caution. The majority of the data should be considered baseline and preliminary, in large part because data sources vary considerably in terms of what exists historically," the report reads. "Consequently, it is difficult to draw conclusions about the potential effects of marijuana legalization and commercialization on public safety, public health or youth outcomes, and this may always be the case due to the lack of historical data."

Nonetheless, the 266-page report, which stems from a bill passed by the state legislature in 2013 calling for an extensive study on legalization's impact, includes some significant data.

Instances of youth use and impaired driving have decreased after rising in the first few years after legalization, according to the report. The number of Colorado high school students who used marijuana within the past thirty days dropped nearly 2 percent from 2015 to 2017, and has been lower than the national average from 2011 to 2017.

Colorado Division of Criminal Justice
Statistics regarding driving impairment are a little harder to quantify.

While drivers with THC in their blood undoubtedly increased after legalization, the cannabinoid can stay in a person's system weeks after consumption, and the Colorado Department of Transportation didn't start collecting data on active THC in drivers' blood until 2016. According to the impact report, the number of drivers with active THC in their blood rose slightly from 2016 to 2017, but those with 5 nanograms (the legal limit for driving in Colorado) or more in their blood decreased by more than 4 percent in the same time span. 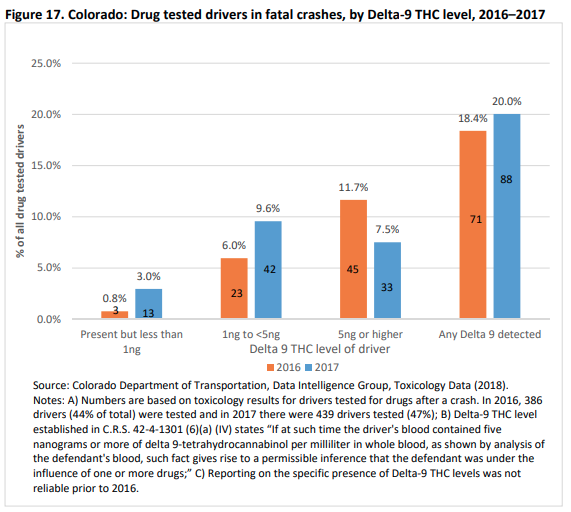 Colorado Division of Criminal Justice
The report includes some jarring statistics about illegal activity, such as criminal cultivations on public land in Colorado and the amount of illegal marijuana seized from such operations. Over 10,350 pounds of illegal pot were seized by Colorado law enforcement in 2017, which is nearly double the 5,145 pounds seized in 2016.

Southern Colorado counties to struggle with illegal operations, the report shows, with Custer, El Paso, Huerfano and Pueblo counties each seeing tens of thousands of illegal pot plants seized on public land in 2017.

Despite the jumps in illegal activity, the total number of pot-related arrests decreased by 56 percent from 2012 to 2017, thanks largely to a 59 percent decline in possession arrests and a 45 percent drop in "unspecified arrests." However, marijuana production arrests increased by 51 percent in the same period. Arrests made on highways, roads and streets dropped 52 percent during thattime, but arrests at colleges and universities increased by 56 percent.

One of the biggest selling points for legalization was the infusion of new tax revenue and the potential to help schools, especially. The impact report shows $40 million from marijuana taxes was put into school capital construction funds in 2017, as well as $27.8 million to the state's general public school fund.

Find the full study below: