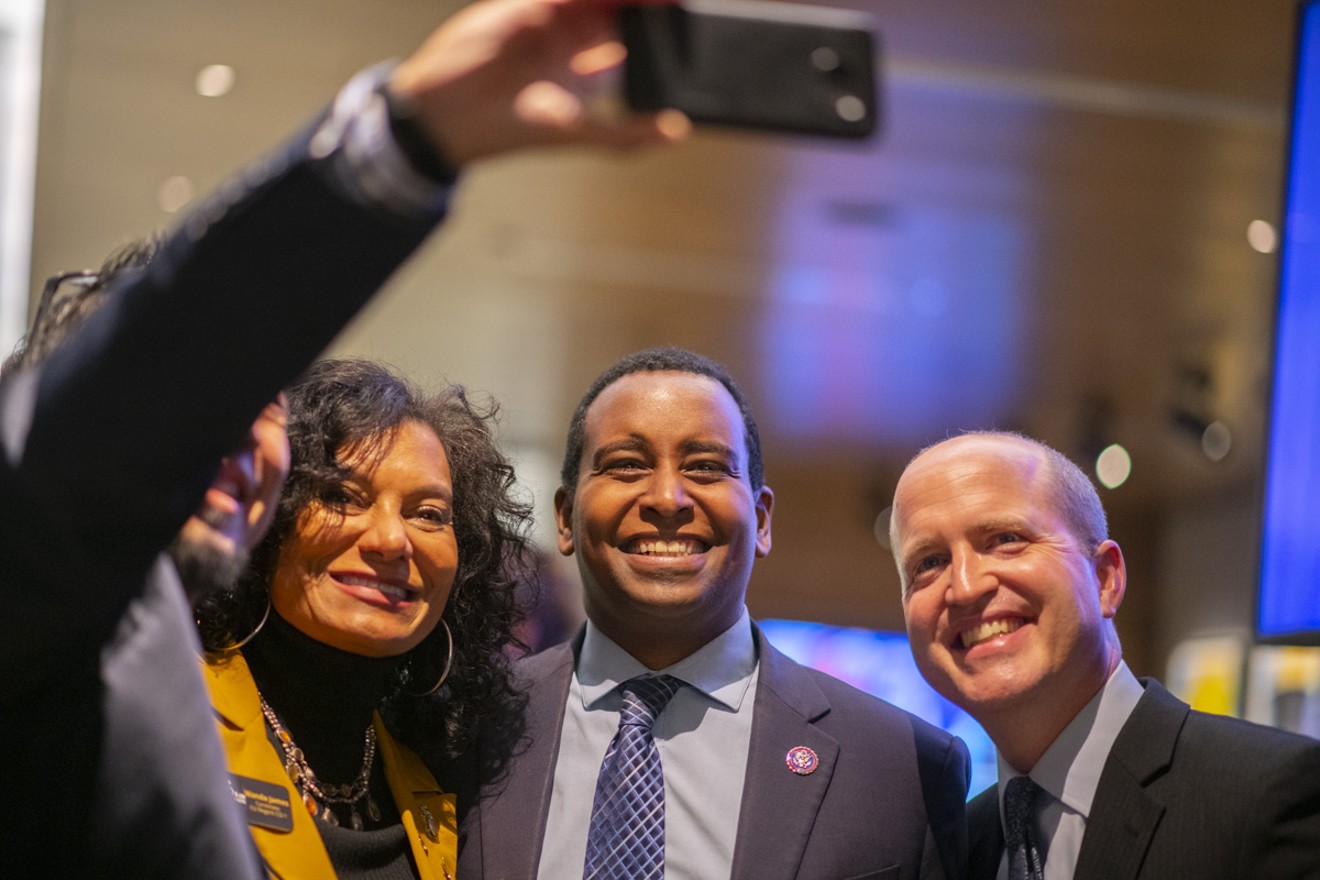 Dispensary owner Wanda James (left) and Colorado Congressman Joe Neguse (middle) celebrated on November 8. Evan Semon
While recreational marijuana measures were successful in several local elections across Colorado, the big, pot-infused victory was in the race for a spot on the University of Colorado Board of Regents.

Wanda James, owner of Simply Pure dispensary in Denver and a longtime member of the state's marijuana industry, won her bid for the District 1 seat on the Board of Regents by a landslide. The Democratic candidate bested her Republican challenger, Amy Naes, by a 72 percent margin in the November 8 election, becoming the first marijuana business owner to win a major election in Colorado.

One of the first Black dispensary owners in the United States, James faced her toughest challenge in a primary election earlier this year during a back-and-forth race with attorney Johnnie Nguyen. With District 1 centered in Denver, however, the general election was a Democrat's race to lose — not that James didn't have her detractors.

During the campaign, failed Republican gubernatorial candidate and current CU Regent Heidi Ganahl criticized James for her involvement in the cannabis industry. James has never shied away from her career in marijuana, however, and believes her potrepreneurship helped her candidacy.

“I’m proud of the trail I have blazed not only as a Naval ROTC graduate at CU, but especially as a cannabis business owner in Colorado,” she says.

A 1986 graduate of CU Boulder, James says that her biggest objectives are students' rights and diversity among the faculty and Board of Regents, citing data that shows that Black students made up just over 2 percent of CU Boulder's enrollment in 2021.

"I am especially honored to follow in the footsteps of Rachel B. Noel, the first and only Black woman to serve on the CU Regent Board, and even more proud that my victory comes on a day that women voters united around the country to make their voices heard," James adds. "Right now, CU’s level of Black and brown student enrollment and engagement is at declining levels, and I’m going to change that. I am going to finish what Rachel started."

The Board of Regents oversees university tuition pricing as well as a $5.5 billion annual budget that covers CU Boulder, three satellite campuses across the state and Children's Hospital Colorado. Now that she's been elected, James says that she will work toward more affordable tuition, preserving health-care access for female students and increasing outreach to potential enrollees from diverse backgrounds.

"We really have lost our way on valuing higher education as an equalizer opportunity in Colorado,” she argues. “Our flagship university system needs to be setting the example in excellence, and excellence is best served through diversity and access.”

While this is her first election to public office, James has political experience. She managed Jared Polis's first successful congressional campaign in 2006 before working on Barack Obama's presidential campaign committee in Colorado. She also ran a failed Denver City Council bid in 2019 for her husband, Scott Durrah.

James will hold a six-year term on the Board of Regents, where she will be the first Black member since Joe Neguse, who is now a U.S. Representative for CD2.
KEEP WESTWORD FREE... Since we started Westword, it has been defined as the free, independent voice of Denver, and we'd like to keep it that way. With local media under siege, it's more important than ever for us to rally support behind funding our local journalism. You can help by participating in our "I Support" program, allowing us to keep offering readers access to our incisive coverage of local news, food and culture with no paywalls.
Make a one-time donation today for as little as $1.