iStock.com/sangriana
A proposal to give gun rights to medical marijuana users and people with low-level pot convictions misfired at the Colorado Legislature on Wednesday, February 6.

Senate Bill 93, introduced by Senator Vicki Marble, a Republican, and Representative Bri Buentello, a Democrat, would have made medical marijuana patients eligible for concealed-carry permits for handguns, which county sheriffs could issue at their discretion. Anyone who'd been convicted of a marijuana crime for an action that would have been legal after 2012, when the state legalized recreational pot, could also have applied.

Under current Colorado law, the bill's proponents point out, while an MMJ patient can buy a gun, an applicant is ineligible for a concealed-carry permit if the "applicant is an unlawful user of, or addicted to, a controlled substance, as defined by federal law or regulation."

That means that, as the only marijuana users listed in a state database (through the Colorado Department of Public Health and Environment's Medical Marijuana Registry), MMJ patients are automatically barred from being able to carry a gun...if they answer questions on the concealed-carry application honestly. The bill would have made it clear that MMJ patients are no longer considered ineligible in Colorado, and also barred the state Department of Public Safety from sharing any registry information with law enforcement for firearm background checks.

County sheriffs issue concealed-carry permits. Depending on the county, applicants may be asked whether they unlawfully use or are addicted to a controlled substance that's illegal at the federal level. A sheriff can check the Medical Marijuana Registry, then deny a registered patient's ability to get a permit if their county asks if they "use" the substance or admit to addiction. And currently, those who already have Colorado concealed-carry permits must waive their gun rights if they become MMJ patients.

"When you look at people on anti-depressants, they're not on a registry, and their firearms are not going to be confiscated merely because they're on anti-depressants or opioids," Marble told fellow members of the Senate State, Veterans, & Military Affairs committee before the proposal went up for a vote. "We are not trying to change federal law, and this does not change federal law. It just lets people keep the firearms they have, and not be penalized because they are a medical marijuana card holder." 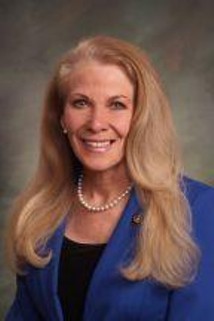 Senator Vicki Marble.
Colorado General Assembly
Veterans for Natural Rights executive director Matt Kahl, an Army veteran, told committee members that he's no longer an MMJ patient because he wants to keep his firearm rights, adding that many of his fellow veterans feel the same, he said. Veterans often take jobs that require a concealed-carry permit, such as private security; as a result, many of them buy more expensive recreational marijuana products instead of using MMJ.

"I have a lot of veterans that...the number-one reason they don't get on the Medical Marijuana Registry is that they don't want to lose their gun rights," he said. "That makes them reliant on things like Oxycontin, benzodiazepines and other pharmaceuticals. These pharmaceutical medications also have mental effects, homicidality and suicidality among them."

Some committee members were worried that the proposal would conflict with federal law. "The bill, as it seems right now, would be overriding federal law. Is that correct?" asked Senator Mike Foote, a Democrat who chairs the committee.

Marble assured him that the bill did not address federal law.

Even so, the committee's three Democrats — Foote and senators Rhonda Fields and Lois Court — all voted against it, with only Marble and Republican Jerry Sonnenberg in favor. So the proposal died in committee.

After the hearing, Buentello said there was a good chance the issue would be revisited in the 2020 legislative session, but that she doesn't expect a similar bill to be reintroduced this year.

"It's frustrating, because I think marijuana has earned the right as a legitimate business in Colorado. And for the medical marijuana community, this is literally medicine for cancer patients and veterans," she said. "It's pain management, yet we still hold on to this arcane idea that marijuana is somehow on the same playing field as heroin. Because of that, we have a lot of people, not the least of which are veterans, who are not being allowed to practice their Second Amendment rights."

Gun violence-prevention group Colorado Ceasefire had opposed the measure, as did several sheriffs' departments, according to Buentello. County Sheriffs of Colorado didn't respond to requests for comment.
KEEP WESTWORD FREE... Since we started Westword, it has been defined as the free, independent voice of Denver, and we'd like to keep it that way. With local media under siege, it's more important than ever for us to rally support behind funding our local journalism. You can help by participating in our "I Support" program, allowing us to keep offering readers access to our incisive coverage of local news, food and culture with no paywalls.
Make a one-time donation today for as little as $1.