Founder Matt Huron moved to Denver in 2006 from San Francisco to join Colorado's burgeoning medical marijuana scene, eventually opening a dispensary on East Colfax Avenue. Good Chemistry has since expanded into four dispensaries in Colorado and two in Massachusetts, with nearly 300 employees. So why the need to change things?

Times are changing in the marijuana industry.

Legal marijuana prices and sales are down across the board in Colorado, where dispensary earnings are projected to fall around 20 percent from 2021 to 2022. Dispensaries that are vertically integrated and grow their own plants, like Good Chemistry, are feeling the squeeze on both ends, but it's not just an industry recession that Huron and his crew have to contend with.

"Growing cannabis for this long, you start to see that people are growing the same genetics or different phenotypes of the same genetics," explains Good Chemistry head of cultivation Heath Byington. "Our cut of Blue Dream may not be the same as the next guy's, so being able to take control of that in-house and start a breeding program will not only allow us to stay consistent on our side, it allows us to make things that are cool and unique to us."

Initially, Colorado dispensaries were required to produce the majority of pot they sold, creating loyalty to stores, not growers. Those rules were loosened soon after recreational sales began in 2014, however, and completely eliminated in 2019. Now dispensaries are trending toward more of a liquor-store model, acting as retailers for cannabis vendors — but there's still value in going to a flagship store. After all, breweries are popular in Colorado, too.

"In the early days, people were just happy to walk into a dispensary and buy legal weed. The consumer wasn't that discerning, but over time we're finding that consumers are more discerning, and that they're starting to understand that not all producers are created equal," Huron says. "Different producers and cultivators are producing different levels of quality."

Good Chemistry believes it achieved a reputation for unique, quality buds through Huron's early releases of strains named after his loved ones — Elmar, Geraldine and Ingrid — as well as dozens of other creations. However, in today's world of monthly strain drops, Huron and his growing staff thought it was time to invest in more breeding, so Good Chemistry converted an 18,000-square-foot cultivation facility into a breeding space. 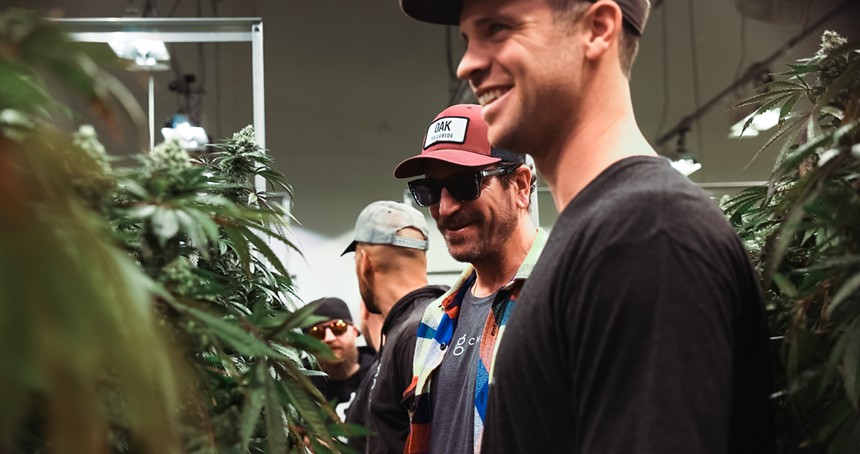 Good Chemistry founder Matt Huron (middle) believes Colorado breeders should get more recognition for their contributions to cannabis.
Courtesy of Good Chemistry
That conversion took place over three years ago. According to Huron, Byington and Nick Fallon, another Good Chemistry breeder, the crew would try out as many as 150 phenotypes of the same strain before settling on one with the appropriate smell, flavor, look and yield they were searching for.

"We like to pheno-hunt, whittle them down and grow them out again. We collect data and take notes and notes, like what the yield was, how it stretches, and what the terpene content is," Byington explains. "Customer strain loyalty is getting less and less. There are some vintage strains like Blue Dream and Sour Diesel that still do have followings, but most flower consumers are interested in who the producer is and what the next strains are coming down the line. The enthusiasm is fun."

Instead of leaking one strain at a time, Good Chemistry has announced eight new proprietary strains, dubbed GC Uniques, for the winter season in Colorado: 5280 Gravy, Aspen Dreamz, Capital Chillz, Colorado Creamsicle, Lift Ticket, Palisade Poison, Powder Daze and Summit Sauce. All of the strains are new lineages or phenotypes, according to Huron, with each cultivar named to evoke memories of snow days in the Rocky Mountains.

The names also showcase the breeding talent in Colorado, Huron adds, noting that the majority of the GC Uniques have modern flavor profiles. One of Huron's new personal favorites, 5280 Gravy, smells like turkey gravy or cooked onions — a relatively new take on a popular trend of savory-tasting strains like GMO and Garlic strains.

"Some of the seeds we're getting from these parent plants will be in the thousands, and then the phenos can be in the hundreds. We went through 157 plants for 5280 Gravy, and we're doing something similar with what we're working on right now," he says. "I've always thought Colorado has been viewed as a red-headed stepchild to California, so it was really important for us to invest in this and show there really are good breeders and cultivators in Colorado."
KEEP WESTWORD FREE... Since we started Westword, it has been defined as the free, independent voice of Denver, and we'd like to keep it that way. With local media under siege, it's more important than ever for us to rally support behind funding our local journalism. You can help by participating in our "I Support" program, allowing us to keep offering readers access to our incisive coverage of local news, food and culture with no paywalls.
Make a one-time donation today for as little as $1.