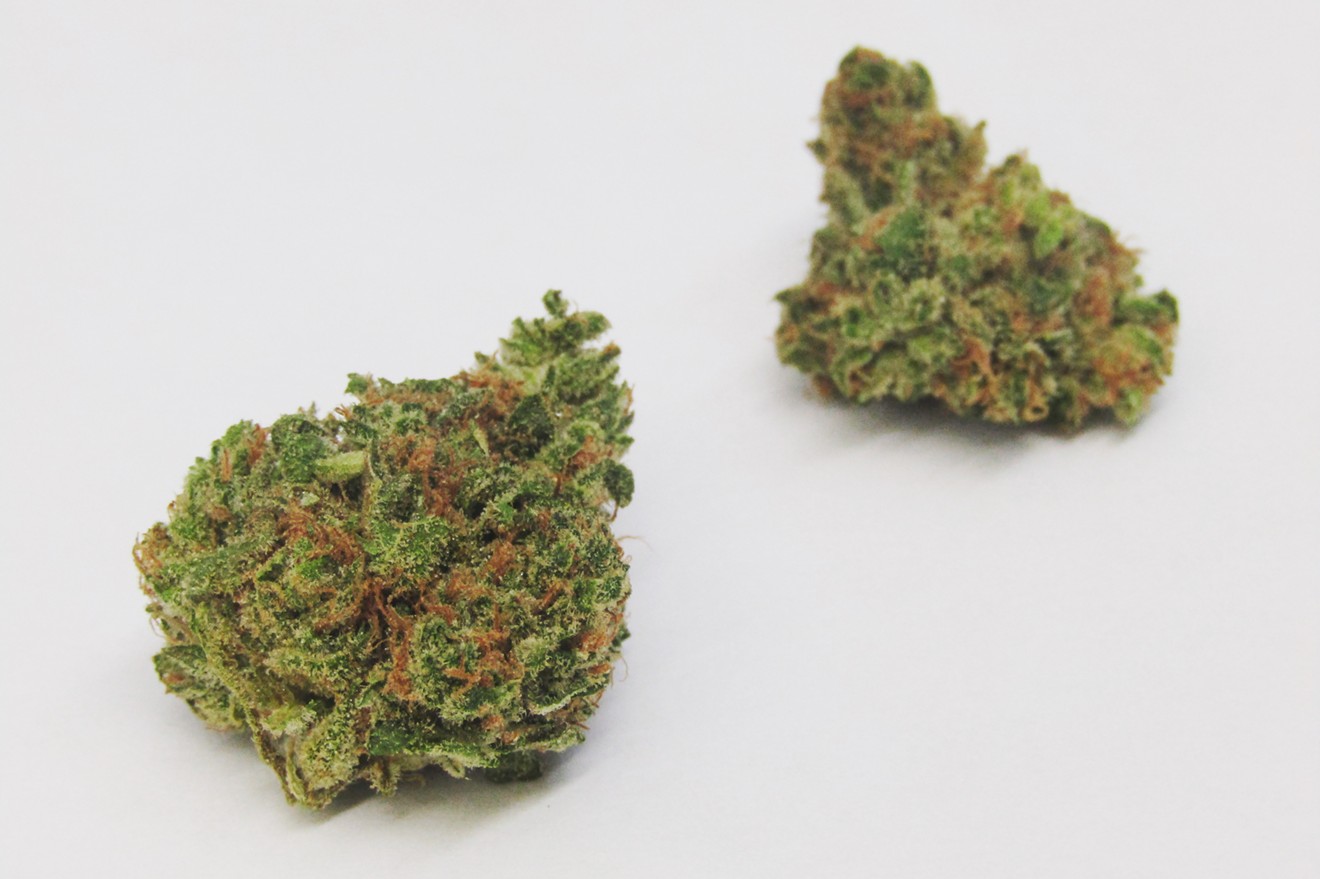 Own the lunch table with a bag of Gushers. Herbert Fuego
If there’s anything I miss about school, it’s bartering at the lunch table. Nothing was more satisfying than trading a limp PB&J and apple slices for a Lunchable and Hot Cheetos. (I hear prison offers a similar rush, but I don’t miss haggling that bad.) Rich, spoiled kids flaunting their junk food were always an easy target, as their friends selling Herbalife products have subsequently found out.

Although candy was still a rarity at school even for the rich and spoiled, other sweets weren’t. Twinkies, Fruit by the Foot and Squeezits were all hot commodities, but one dyed, sugary treat outranked them all: Gushers. The immense amount of corn syrup and colored goop was an instant draw for kids. So naturally, some of those same qualities are an instant draw for stoners.

A cross of Triangle Kush and a Gelato phenotype by the Bay Area’s Cookie Fam Genetics (the breeder that made Girl Scout Cookies so popular), the Gushers cannabis strain has a deep background that includes a Cookies lineage and old, mysterious Kush genetics from Florida. We’re all familiar with the staunch stone and sweet flavor of Cookies strains, but not nearly as many of us are acquainted with Kush strains out of Florida, such as Bubba and Triangle Kush — much less know their history. And like anything out of that state, things get weird quickly when you play with either of them.

If you like keeping your hands in the Cookies jar at dispensaries, this Gelato offspring lines up with that flavor profile, with fruity, sugary aspects that hang around before they’re washed out by an earthy blast of classic Kush. While the strain isn’t quite fruity enough on the tongue for a name deserving of Gushers, I get trying to stay on brand when breeding with Gelato or other Cookies offspring.

Gushers aren’t exclusive to the rich and spoiled table in the school cafeteria, either. Ajoya, Doc’s Apothecary, Drift, Euflora, Rocky Road, Silver Stem Fine Cannabis, Redeye Releaf, RiverRock, Solace Meds, the Stone and Xclusive Cannabis all carry some form of the strain, and wholesale extractors and growers are sending it elsewhere around Colorado, too.

Looks: If it weren’t for the intense dark-green and purple colors, Gushers buds would look like pine cones, with dense oval and teardrop structures. But the strain’s purple tendencies, rusty pistils and heavy trichome coverage are too vibrant.

Smell: Somewhat of a collision between new and old scents of the cannabis world, with the initial sugary, candy-like aromas and creamy overtones followed by notes of wet soil, spicy herbs and cinnamon. The vanilla qualities of Kush strains and the creaminess of Cookies didn’t bridge that gap, as I’d hoped, but smelling a jar is still complex and enjoyable.

Flavor: It really depends on the cut, with some more sweet and creamy, and others more dank, earthy and spicy. I prefer something in between, like sweet grape and berry flavors followed by spicy vanilla and dirty pine.

Effects: Not quite a one-hit knockout, but euphoric and sedating nonetheless. The quick bliss of Gushers would make me ignore a house fire, relaxing me from my neck to my ankles. But that bliss soon turns into pure sloth and gluttony, so consider yourself warned. Medical patients have used the strain to treat pain, sleeping and eating disorders, headaches and stress, among other ailments.

Home grower’s take: “Have some friends in Sacramento who like this one a lot. Don’t know how he was able to get ahold of it, because I haven’t found seeds anywhere. Sometimes an employee in the grow can sneak out a cut of the plant and turn it into something. Sometimes it’s just all bullshit. The stuff I’ve had at the store and what my buddy grows [both] get potent and thick, though. Good to look at.”