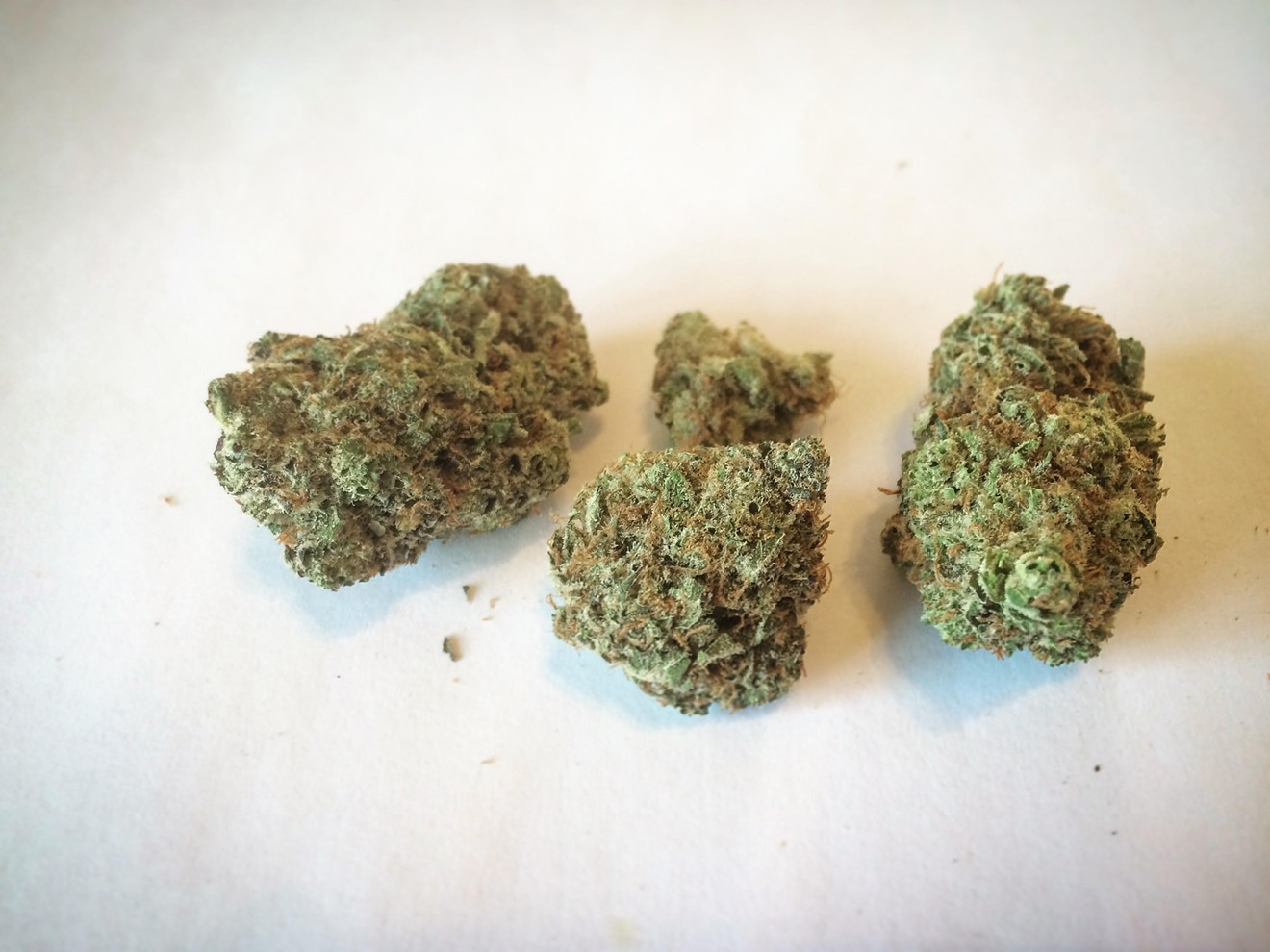 Big pimpin': Lavender Jones Herbert Fuego
My eighty-something-year-old grandmother caught me smoking a joint in my parents’ garage while I was home for Christmas. Instead of getting mad, she chastised me for my “foul, skunky-smelling” pot. “Can’t you get something that smells nice? Like lavender?” she asked. You bet your ass I can, Grandma — even though you’re missing the point on the skunk. Let me introduce you to my silky friend, Lavender Jones.

Lavender Jones is quickly becoming the most popular “Lavender” strain in Colorado, lining shelves at chain dispensaries and independent shops alike. But how could it miss with a name like that? Lavender Jones sounds like a smooth-talkin’ player swaggering down Colfax with a bulge in his pants and a smile that makes the ladies swoon — and that’s exactly how I feel after blazing it.

First glance at Lavender Jones’s compact, violet buds will probably make you think that it’s a heavy indica, but don’t let those looks deceive you. The strain is actually sativa-leaning, bred from Generation X favorites Casey Jones and Purple Urkle to create a very balanced high that’s perfect for daytime smokers. Like the first time you drink a black IPA — an IPA brewed with roasted malts for a much darker body but the same hoppy bitterness — you quickly find that the beauty of Lavender Jones is exactly what it isn’t. A surprising citrus flavor dominates the nose and tongue, and the high is incredibly balanced — both rare traits for purple strains.

Heavy yields and a relatively easy upkeep have most likely contributed to Lavender Jones’s quick rise up the charts in Denver. It has a flowering period of less than nine weeks and yields that regularly reel in close to ten ounces per plant. Quantity isn’t killing quality here, though: The strain’s controllable high and refreshing flavor make this an easy pleaser for purple lovers and haters alike.

Looks: Buds can be very large and range from circular to oval-shaped, with a dense structure. They vary from dark to light green, with occasional shades of bright purple in calyxes and leaves and bright-orange pistils.

Smell: A very sweet, tangy burst of orange peel up front, followed by calming floral scents of lavender and sage.

Flavor: The intense citrus flavor, probably from its Casey Jones genetics, can be dominant at first, but after a few moments (and tokes), you’ll notice creamy notes of lavender with an earthy aftertaste.

Effects: Lavender Jones’s indica/sativa balance makes it a good all-day high for users of all tolerances. Starting with a calming yet uplifting cerebral charge, the high combats stress, depression, anxiety and insomnia. The indica relaxation isn’t very strong, but it can knock you out if you’re active after smoking.

Home grower’s take: “Pretty good strain. Won’t blow you away with the way it looks, but that citrus sourness and flowery flavor really make a good smell and taste — like that fresh body wash or cleaner smell, but without the chemicals. Most people who continually grow this are about the bottom line. Nothing wrong with that — the high is nice and works for most — but Lavender Jones is really easy to grow, can get more than three pounds per two [1,000-watt] lights, and it harvests in less than nine weeks. Very easy compared to others once your grow is running smoothly.”

Commercial grower’s take: “You can’t help but notice this strain if you follow the industry. Native Roots, Lightshade, Frosted Leaf, The Health Center — those chains all carry it. Why? The yields are epic. On top of that, the color combination is great and it smells like spring. Sort of like Blue Dream, but not quite as popular.
Big harvests and a good high make it a win-win for growers looking for yields and customers looking for deals.”

Is there a strain you’d like to see profiled? E-mail [email protected].