Coats gained national attention in 2010 after he was fired by DISH Network over a failed drug test. Since he was never accused of being impaired on the job and had scored high on his work evaluation reports, Coats appealed his termination and went on to become a face of workers' rights in Colorado during a five-year court battle.

A quadriplegic medical marijuana patient, Coats became paralyzed when he was seventeen after breaking his vertebra in two places in a car wreck. He began using medical marijuana to treat back spasms, which worked "instantly and lasted for a long time," says his mother, Donna Scharfenberg, who adds that while his quality of life was never great after the accident, medical marijuana improved it.

"He was trying to be as normal as possible by having a freaking job, and society said, 'You can't,'" she recalls. DISH "even said they didn't have any problem with Brandon. He was one of their best employees."

A national corporation that got its start in metro Denver, DISH had a company-wide drug-testing program that included identifying THC, and didn't consider Coats's medical marijuana registration as reason for an exception.

"The same day he got fired, he was out looking for attorneys. He didn't drive, and he had to go a couple miles in his wheelchair," Scharfenberg says. "He just took off and found one on his own."

Coats's termination occurred before Colorado legalized recreational marijuana, and his case highlighted a dilemma that's only grown since Amendment 64 passed: Although his marijuana use was legal, Colorado has no laws that protect employees who test positive for THC in a work-related drug test, even if the marijuana use is legal and it's consumed off-hours. 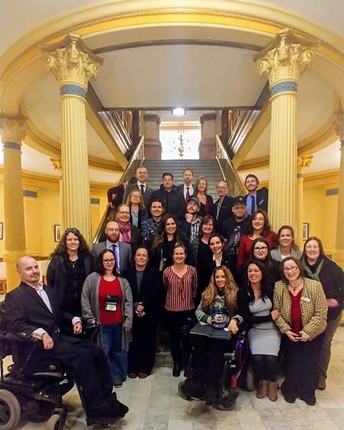 In 2015, the state Supreme Court ruled against Coats five years after his firing, stating that although lawful activities are protected during an employee's off-hours, the statute providing such protections doesn't define what "lawful activities" are, and marijuana use didn't qualify.

"There was no self-interest there. He knew it wasn't about his job at that point. It was most important to him so it didn't happen to other people going forward," Scharfenberg says. "He was always proud of that journey. That was huge, especially when people would recognize him. In 2015 and 2016 when he was in the media, he would go into a new dispensary, and he loved being recognized then."

In the years following his court case, Coats's celebrity cooled off, but he didn't stop fighting. He testified at the Colorado Capitol many times in support of legislation that would protect employee marijuana use off the job. He did so during the last legislative session, even though it took him hours to get out of bed, dressed and to the Capitol.

"He took everything in stride. He didn't complain about his pain, and I know the pain that comes with the disability he had," says Ashley Weber, executive director of the Colorado chapter of NORML, a marijuana activism organization, who is also quadriplegic.

"Brandon was just a fighter. He never gave up on the legislation. We tried passing it three years in a row, and he was there every single time to testify," Weber says. "Each year I talked to him when we ran legislation; he was optimistic no matter what. He knew it might not pass, but he wanted to go for it anyway. He just wouldn't give up."

Since the Colorado Supreme Court dismissed Coats's case, the Colorado Legislature has rejected three bills that all proposed protecting employees from automatic work dismissal if they test positive for THC. Weber says that NORML hopes to find a lawmaker to introduce similar legislation in 2023.

Coats, 43, died on October 31 from complications related to surgery intended to treat an infection, according to his family and friends. They remember him for his fighting spirit as well as his sense of humor, passion for cooking and love for his dogs.

"He would probably want to be remembered as someone who was resilient in everything that he did," recalls his mother, "whether it was the court case or just getting out of bed every day."
KEEP WESTWORD FREE... Since we started Westword, it has been defined as the free, independent voice of Denver, and we'd like to keep it that way. With local media under siege, it's more important than ever for us to rally support behind funding our local journalism. You can help by participating in our "I Support" program, allowing us to keep offering readers access to our incisive coverage of local news, food and culture with no paywalls.
Make a one-time donation today for as little as $1.