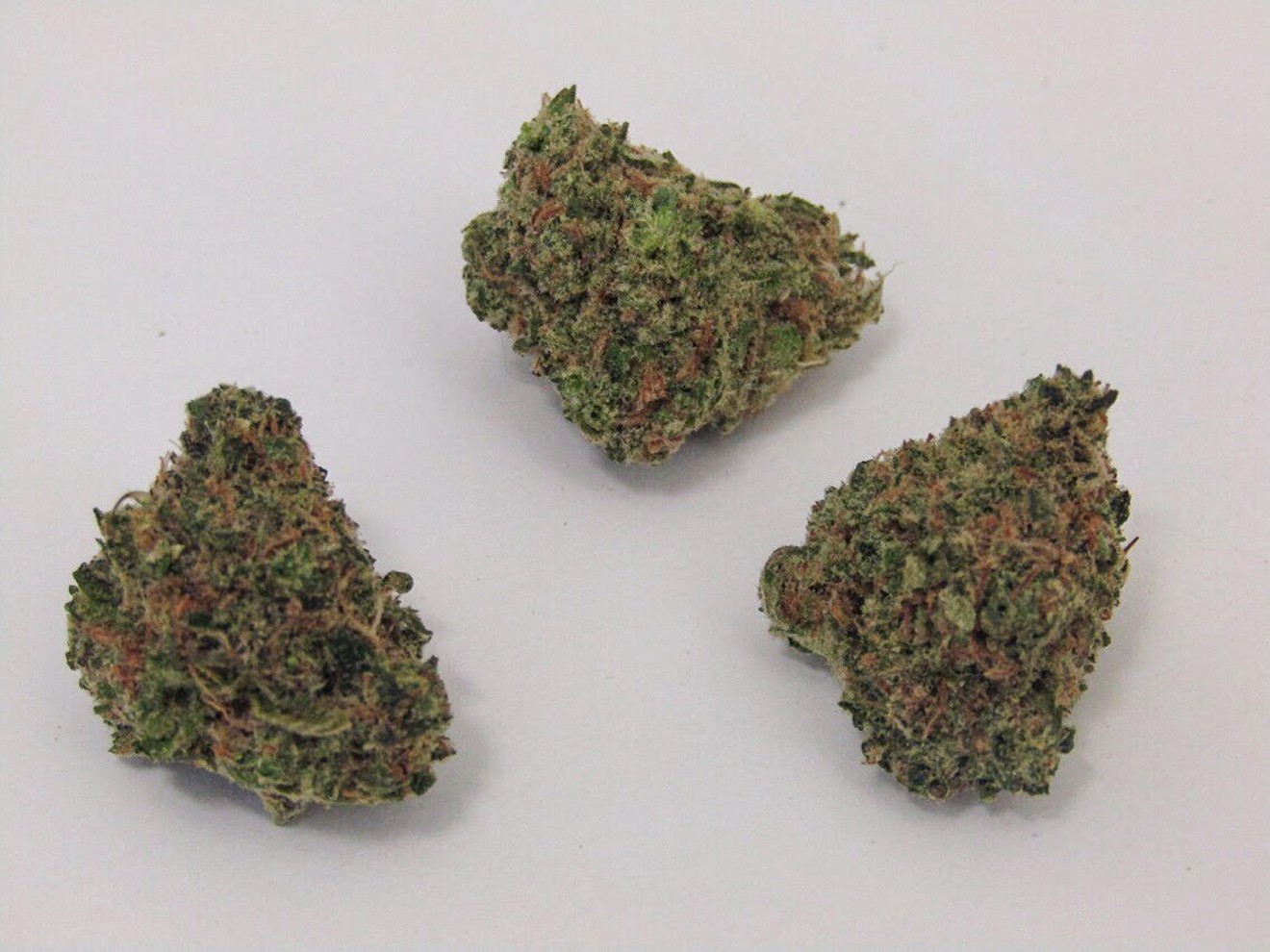 Don't bite off more than you can handle with Pineapple Trainwreck. Herbert Fuego
As fun as it is to go to the moon off a potent strain, I never want to get lost in space. Some varieties of cannabis leave my mind reeling for way too long, however, making me both confused and unproductive until the high is over. I’m too old for that shit.

For those reasons, I’ve stayed away from Trainwreck, certain Hazes and Durban Poison, a past favorite, as I continue trying to fit into the big-boy pants that my girlfriend is so keen on putting me in. In all seriousness, though, most of us don’t have time to stare at the fridge for three hours. As the immortal Katt Williams said, “I got shit to do today.” If only I’d listened to him.

Still, on a recent weekend excursion to a pot shop, I believed I was ready to give the mind-bending Pineapple Trainwreck a chance. A child of Pineapple Express and Trainwreck, I expected the strain to give me a formidable, caffeine-like rush for some Sunday lawn work, and was just hoping my tolerance could handle it. That was before I remembered that Pineapple Express was a cross of a Hawaiian landrace and Trainwreck, meaning Pineapple Trainwreck was a backcross of Trainwreck and carried stiff sativa genetics — a guaranteed recipe for a stoned and disoriented adventure.

It’s hard to walk away from Pineapple Trainwreck after a sniff or taste, especially if you’re not wise on the genetics. A sweet, tropical blend of pineapple and mango notes teeters just on the edge of being too sour, but then grainy, soil notes of myrcene save the day for more balance. Despite its full flavor, Pineapple Trainwreck is a one-way ticket to fuck-all: I was too distracted by birds and cars driving by my house to reseed more than a third of my lawn, and my rake is still sitting in the middle of the driveway.

Pineapple Trainwreck has been spotted at bgood, Denco Alternative Medicine, Leiffa and L’Eagle in flower, as well as in concentrate form by Double Black Extracts. While none of those shops are located along Denver’s main drags, they all provide versions that will remind you of a tropical Kush smoothie, especially Double Black’s pricey terp jelly. Denco and L’Eagle’s flower of the strain is a little more affordable and just as delicious, but the taste isn’t worth the aimless high if you react to Trainwreck strains like I do.

Looks: Like Maui Wowie, Pineapple Express and other strains with strong Hawaiian influences, Pineapple Trainwreck comes in round buds that are somehow dense without weighing much, with a mellow, light shade of green and peach pistils.

Smell: A rare and appetizing combination of sweet, dirty, sour and tangy notes, Pineapple Trainwreck mixes the tropical and earthy flavor of a mango, the sweet and tart notes of a pineapple, and the stiff, herbal scents of pine needles for a fruity, zesty blend.

Flavor: Pineapple Trainwreck’s tropical and luscious flavor has nearly as much mango as pineapple, though a sharp, earthy tartness comes in strong at the end, like a fruit cocktail with hints of juniper berries.

Effects: If it had to be one word: lost. Like its predecessor, Pineapple Trainwreck is known to make users wander aimlessly through hallways and life with little purpose — which can be disorienting, given its simultaneous energetic effects. Still, the absent-minded high has treated stress, anxiety and nausea, and has been used for depression in certain cases.

Commercial grower’s take: “This pineapple version makes me talk way too much. I’m a bigger fan of the original Trainwreck — the high is more euphoric and I dig the old-school genetics — but I can see why people like the flavor of [Pineapple Trainwreck] more. It can be so sour and sweet, it’s like pineapple juice, but it has that earthy flavor to cut it out. I like the flavor — just not the high as much.”