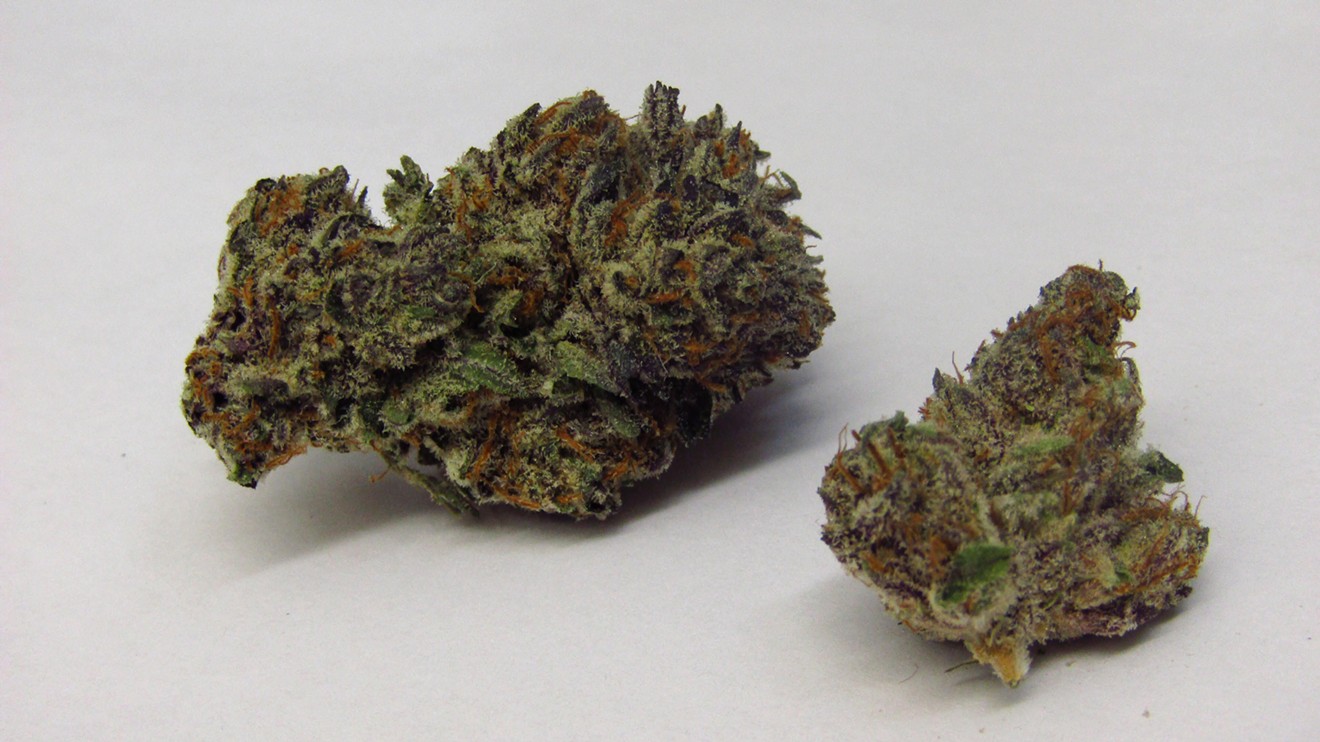 They say a bowl of Sage N Sour makes you a tower of power. Herbert Fuego
The name is a little much, but SAGE (Sativa Afghani Genetic Equilibrium) has always been underrated in the legalized version of Denver, and can only be found in a few dispensaries...if you’re lucky. A precursor to Girl Scout Cookies, Gorilla Glue and other potent strains with long, even-keeled highs, SAGE peaked in popularity in the mid-2000s, But even if you can’t find the original, any other version will usually do, particularly Sage N Sour. Also called Sour Sage, Sage N Sour is even harder to locate than SAGE, but a handful of pot shops occasionally carry it. Known for better daytime effects and focus than its parent, Sage N Sour is a cross between SAGE and the energetic and ever-pungent Sour Diesel. The hybrid’s rubbery aroma and coffee-like effects tilt much more on the Diesel spectrum, but assertive spicy and piney notes on the back end and a pacifying head high balance out those gassy characteristics.

A little Sage N Sour goes a long way, with one bowl taking me to a blissful, productive mindset for hours at a time. Those intervals never resulted in a nap or groggy bitch face, and didn’t keep me awake at night, either; daily users appreciate that flexibility. Seasoned tokers will also enjoy Sage N Sour’s clear flavor profile, full of pungent, gassy Diesel notes, with peppery, floral bits of sage and a bitter, piney back end.

Getting some Sage N Sour might require a hunt, but it’s worth the journey. I’ve seen it at Drift, the Herbal Cure, Pig n’ Whistle, Peak, and Trill Alternatives, and dispensaries carrying Nomad Extracts may have it in concentrate form. If you prefer flower, head to the Herbal Cure or to Boulder for Drift or Trill, and you won’t be disappointed.

Looks: Long, segmented and usually mitten-shaped, Sage N Sour’s buds lean sativa, but still carry some weight if you know what you’re doing. While the calyxes and leaves can become bright green, I usually see a healthy mix of dark purple covered with a thin layer of milky trichomes.

Smell: Once you learn the genetics, it’s hard not to be reminded of SAGE and Sour Diesel. A pungent, rubbery whiff with a musty overtone (think tennis balls) blends seamlessly with notes of pine and a thick floral zest, like sage.

Flavor: Sage N Sour usually has more of a floral, spicy flavor up front than expected, but those sour, rubbery Diesel notes and a layer of bitter pine, like juniper, stick to the side of my tongue long after I’m done.

Effects: Like the flavor profile, Sage N Sour’s high is a well-balanced mix of its parents’ strengths. A burst of enthusiastic energy hits my body immediately while loosening my limbs, but the Afghani influence from SAGE keeps that energy in check, allowing me to focus on creative or laborious tasks without a major comedown.

Home grower’s take: “Even for a sativa with buds that don’t get huge, it still yields all right. The calyxes are pretty dense, and usually undergo this awesome transformation from green to violet during the last week or so. You’re not growing this for quantity, though, because I’d give it about a seven out of ten in that department, and it’ll take at least nine weeks if you want ripe trichomes and those thick rubbery pine smells. I’d do it again if I ever saw clones of it, but that’s a lot of work for an average yielder.”

Commercial grower’s take: “Sour Sage gets really tall — like, almost five feet, and that’s not counting the reservoirs you’ll put them in if you grow inside. The stretching and trying to increase an average harvest can require some expertise, so I wouldn’t recommend this for any beginners. But if you come upon some seeds and can take on that challenge, it’s one of the best strains for daytime, and has a delicious, terpy smoke full of herbs, pine and Diesel.”