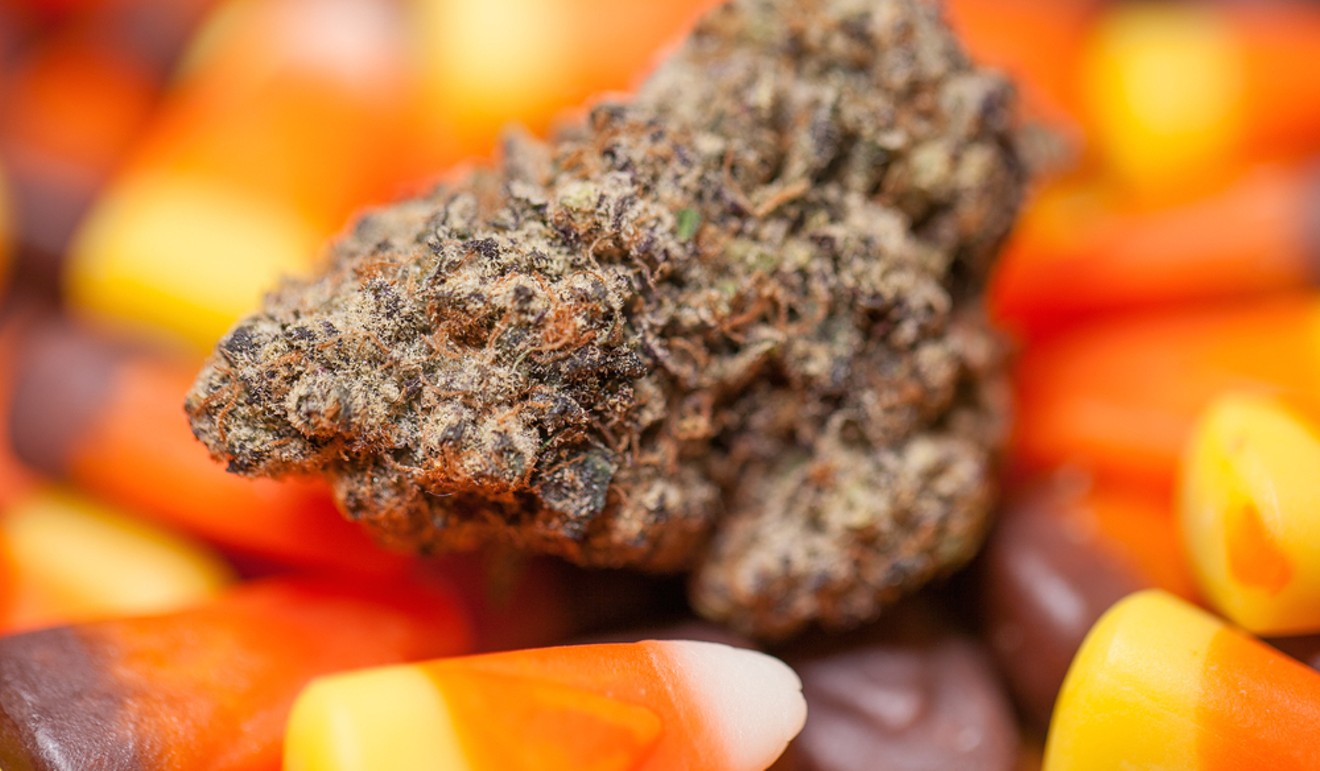 Shutterstock.com/Canna Obscura
Shopping for retail marijuana in Denver is like time-traveling both into the future and back to the past. You can buy products here that aren’t available anywhere else in the world, and that includes on the Internet. Unlike clothes, electronics, books and even groceries, you can’t order cannabis delivered to your door in Colorado (although legal states Nevada and Oregon allow it, our state currently bans that option). And while the consistency of infused products’ effects has greatly improved since required potency and homogeneity tests began, it’s just as hard to keep up with cannabis trends today as it was when this all began in January 2014.

Newer, stronger forms of concentrates, more refined edibles brands and innovative infusion techniques are improving at a rate that’s tough for industry insiders to track, much less the average consumer. Just when you think you’ve figured out live resin and pressed rosin, distillate and isolate show up. Think lotions, patches and balms are the only topicals out there? Think again. These days, picking out the right product can feel more like spinning a roulette wheel of pre-filled vaporizers and CBD/THC mixtures than making an educated choice. To help you catch up, we’ve picked out our favorite cannabis products for the season, choosing edibles, drinks, concentrates and accessories that go exceptionally with hoodie weather and pumpkin-patch vibes. 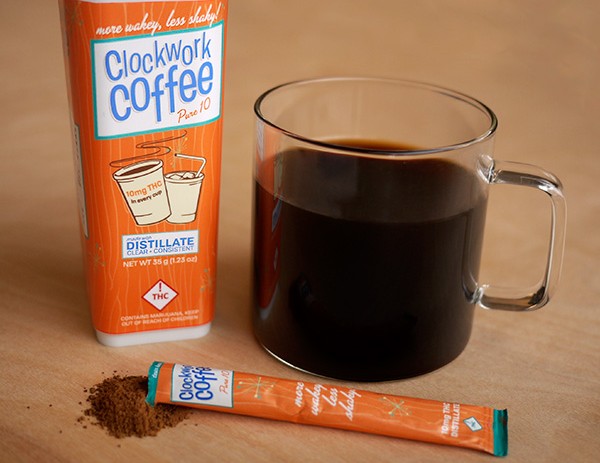 Courtesy of Stillwater Brands
Stillwater Coffee and Teas
Nothing beats sipping a cup of hot coffee or tea after snow’s been falling all night. While it’s no longer cutting-edge to infuse hot drinks, we haven’t seen a company approach the new age of wake-and-bake quite like Stillwater. Basing its product line on water-soluble forms of CBD and THC, Stillwater gained consumer attention for its tasteless Ripple product, which can be mixed into drinks and food. Using the same technology, the company has come out with a variety of coffees and teas infused with different levels of cannabinoids.

Starting with black, green and mint teas, Stillwater infused steeping sticks with doses ranging from 2.5 to 10 milligrams of THC and CBD; you simply drop the stick in hot water, stir a few times and enjoy. The new infused instant coffee, which comes in 10 milligram doses of THC and 5 milligram doses of CBD/THC, is even easier: Just dump the mixture in a mug, add a cup of hot water and stir. The light doses won’t get daily users blitzed, but the drinks kick in quickly, relieving morning cramps, sickness and other discomforts while adding a shot of caffeine to start the day. 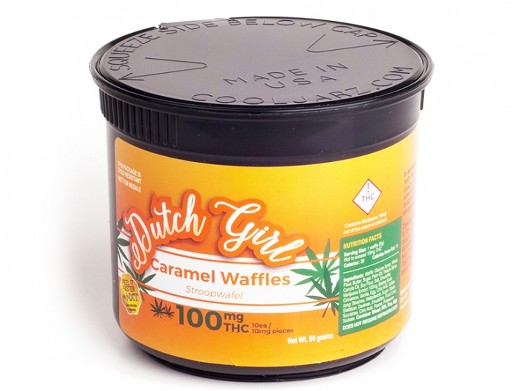 Westword archive
Dutch Girl Caramel Waffles
Dutch Girl is part of an edibles branch of CannaPunch, which has expanded into vaping, gummies and seeds since establishing itself as a popular infused-drink brand during the first years of retail sales. In true Dutch fashion, the first edibles were chocolates and stroopwafels, a popular snack in the Netherlands made from two thin discs of baked dough with caramel filling in the middle. While the chocolates are fine, the stroopwafels are heerlijk te neuken, which means “delicious” or “lovely to fuck” (or both) in Dutch.

These are likely to make any product guide throughout the year, but something about brown sugar and caramel just feels right during fall. The combination of caramel stickiness and crunchy waffle dough pairs great in the morning with coffee, even better with a glass of milk at lunch, and best with cider at night. Dutch Girl stroopwafels come in packs of ten, dosed at 100 milligrams total on the retail side and 250 milligrams for medical. 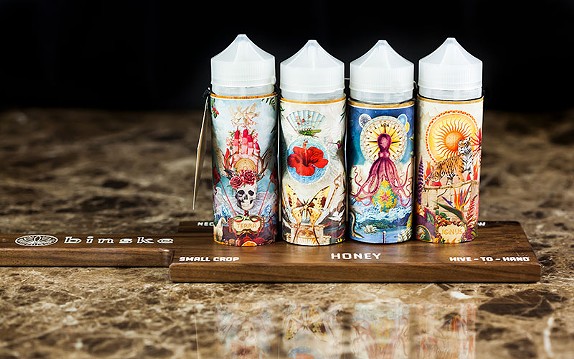 www.binske.com
Binske Honey
The edibles trade hinges as much on presentation as innovation, and Binske has pushed into dispensaries with both. Taking a cue from the craft-beer industry, the company’s artful packaging looks more like a collectible than an edible, with Binske hiring British artist Martin O’Neill to create labels playing off hundreds of etchings and watercolor reproductions in natural-history archives. And that source material makes sense when you consider Binske’s product line.

Like other companies, Binske makes infused chocolates and fruit snacks, but the Peruvian cacao and French strawberries it uses really sets these edibles apart in terms of both texture and quality. Its infused olive oil, offered in chipotle, garlic, lemon and olio nuvo flavors, is impressive, too. But my favorite Binske product — especially for this season — is the infused honey, sold in 100 milligram bottles. Not only is it delicious in oatmeal or with apples, but it lends a delicious kick to Stillwater teas and coffees. Binske’s clover honey is the most popular, but keep your eyes peeled for orange blossom, wildflower and Yampa Valley varieties.

Courtesy of Incredibles
Incredibles Bath Salts
Incredibles is known throughout Colorado and the handful of other legal states as one of best infused-candy-bar makers in the country, but founder Bob Eschino and team weren’t content with just being the Willy Wonka of weed. Incredibles also has a concentrates division and a wellness-inspired line of CBD/THC products. While the new vape cartridges, suppositories and tinctures all provide relief, nothing is more relaxing in cold weather than a hot bath.

Incredibles bath salts, available in eucalyptus and lavender, treat aches, pains and inflammation while also supplying a level of aromatherapy that most topicals don’t bring to the table. They come in 420-gram tubs; use the 21-gram scoop to pull up about 25 milligrams of THC. Unlike most infused bath bombs and soaks on the market, which are made with CBD derived from hemp, these contain only THC. You won’t get high, but you can expect more consistent therapeutic results. 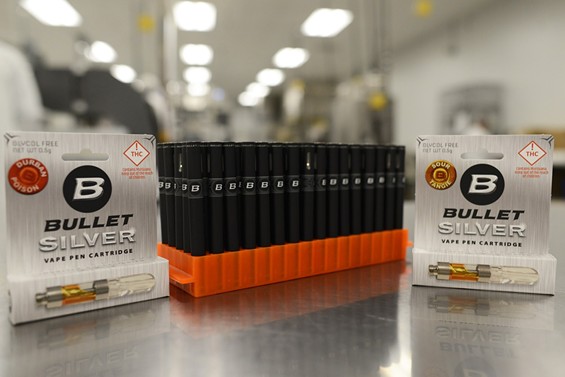 Scott Lentz
Bullet Distillate
Bullet Concentrates got its start in Nevada but is slowly infiltrating Colorado dispensaries after inking a production deal with the Bronnor Corporation, a Denver-based wholesale infused-product manufacturer. Bullet specializes in pre-filled vaporizer products, filling glass cartridges and disposable pens with potent concentrates. None of that is new for Colorado, and neither are pre-filled distillate cartridges — but Bullet does both better. My set of Bullet cartridges have never leaked, clogged or spoiled — flaws I’ve dealt with from other companies’ products. The potency was also hefty, taking me to the moon after two hits on my battery’s lowest power setting of three volts. And since Bullet uses glass instead of plastic for its cartridges, I never had to worry about inhaling toxins from hot, possibly melting plastic.

My only gripe with Bullet (and most distillate companies) is the reintroduction of terpenes into the concentrate: Even if the company says they’re derived naturally from cannabis, they still taste a little fake. But at least with Bullet products, the flavor isn’t overpowering — and in a few varieties, such as Gorilla Glue and Tangie, they even taste like flower. Next time you’re hankering for a hit at a haunted house, at your nephew’s football game or after Thanksgiving dinner, take a Bullet to the chest and see how good it feels.

Courtesy of LEVO
LEVO Oil Infuser
Fall is when the sweets really start coming out, so why not make your own? Like a Volcano vaporizer, the LEVO infuser markets itself as an all-encompassing product for herbal enthusiasts, mixing many types of edible oils with a variety of herbs, fruits, nuts, seeds, roots and more. But this infuser was really made for pot, and because LEVO is based in Denver, it doesn’t have to hide that. LEVO founder Chrissy Bellman came up with the concept in college, after her friends stunk up a hostel while making stovetop weed butter, but now she’s taken it a thousand steps further with magnetic stirring, temperature controls and dishwasher-safe materials, creating one of the coolest DIY cannabis gadgets we’ve ever played with.

With the LEVO infuser, you can make infused butters and cooking oils for cookies, pies, salad dressings and more, and you can also whip up lip balms, essential oils and bath scrubs — with or without cannabis. Want to mix a little weed and lavender in with your coconut oil for a latte? No problem. How about infusing some CBD and Russian Sage into your cuticle cream? Easy. The LEVO website has plenty of recipes, but you’re free to cook up your own.