Scott Lentz
Colorado made history eight years ago when voters passed Amendment 64. After then-Governor John Hickenlooper signed off on the election in late 2012, Colorado became the first state in the country to legalize recreational marijuana.

What does all that mean for Colorado's still-booming cannabis industry? To find out, we caught up with VS Strategies partner Mason Tvert, a cannabis legalization advocate and campaign advisor who's in a unique position to answer that question. After organizing successful local decriminalization measures in Colorado, Tvert helped push Amendment 64, and has since worked on legalization initiatives across the country with VS Strategies. Here's how he sees the future for marijuana in the United States:

Westword: We've seen cannabis be successful on election night in the past, but what does a 5/5 sweep do for momentum toward ending federal prohibition?

Mason Tvert: This was another truly historic election year for cannabis policy reform. I recognize that I have said that every two years since 2012, but I honestly can’t think of a more accurate way to summarize it. The fact that it has grown cliché says something about the momentum behind this movement. Major state-level reforms passed with flying colors in four distinct regions of the country, each with its own unique political and cultural landscape. It’s a clear sign that the country is ready to move forward, and people want to see action taken.

With nearly a third of the country now legalized for recreational cannabis use, how does that affect Congress's attitude toward the plant?

With each state that flips, we see growth in congressional support for federal reform. Members who were already supportive become emboldened, and fence-sitters and soft opponents are reassured that regulation works and the sky does not fall when you stop needlessly punishing cannabis consumers. They will soon have constituents and folks close to them who benefit from these laws in one way or another. They will have family members, friends, or friends of friends who depend on medical cannabis, or who work or invest in the cannabis industry or companies that provide it with services or goods. And they will increasingly agree that cannabis consumers and businesses deserve to be treated fairly, or at least not like criminals.

How about former Colorado governor and current Senator-Elect John Hickenlooper? His past with cannabis is somewhere between lukewarm and complicated; do you see that relationship changing? Cory Gardner ended up becoming a cannabis supporter before he was voted out, so it's an important seat. 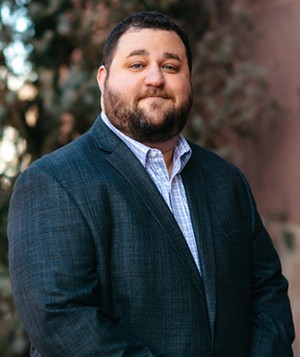 Mason Tvert knows a thing or two about cannabis legalization.
Courtesy of VS Strategies
Senator-Elect Hickenlooper opposed cannabis policy reform efforts throughout his time as mayor of Denver, as well as his first term as governor, and he notoriously responded to the historic passage of the nation’s first legalization law with a tone-deaf munchies joke. But his words and actions during his last few years as governor and throughout his Senate campaign are far more important. He was by no means perfect — as evidenced by his veto of important cannabis-related bills in 2018 — but he deserves credit for his administration’s successful implementation and subsequent defense of Amendment 64 in the face of potential federal interference.

Hopefully this will continue, as Senator Gardner was a key defender of the legal cannabis industry and supporter of federal reform. But keep in mind that he, too, originally opposed Amendment 64, as did Senator Michael Bennet, who has since sponsored legislation to end federal cannabis prohibition. Colorado is getting a lot of attention for flipping a Senate seat from Republican to Democrat, but even more impressively, it flipped three U.S. senators from anti- to pro-legalization.

Arizona was one of the states that just approved recreational cannabis. How far away do you think Colorado's other neighbors are from doing the same?

I’m an Arizona native, and got my start in cannabis policy reform, getting verbally (and in one case physically) attacked for it up and down the Interstate 17 corridor. I also worked on the legalization campaign that came up gut-wrenchingly short in 2016, so it was incredibly encouraging to see this year’s measure receive 60 percent of the vote. It’s also noteworthy that the state’s largest newspaper also changed its editorial position to favor legalization, and there appeared to be far less opposition this time around, at least in terms of funding and endorsements — I’m sure they were just as batshit crazy as ever.

This may be a sign that resistance to reform is slowing down, or at least becoming a less viable political investment. Hopefully the Arizona victory will help push legalization across the finish line in New Mexico, where the governor is supportive and lawmakers are working on legislation for next year. Medical cannabis recently became legal in Utah and Oklahoma, and the latter’s already-bustling cannabis industry is emboldening advocates to take a close look at pursuing an adult-use ballot initiative. Nebraska would have legalized medical cannabis this year had it not been wrongfully removed from the ballot, and advocates are already working on a measure for 2022. In Texas, there will be pushes in the [state] legislature this spring, both for legalization and for expanding the state’s low-THC law into a more comprehensive and effective program. And hopefully it won’t be much longer before we see some heightened reform activity in Wyoming and Kansas.

How big of an impact would legalization in Texas have on Colorado? Would it affect more than just dispensaries in border towns?

It could tamp down enthusiasm for visiting Colorado among the population of folks who are intrigued to experience legal cannabis, but I don’t know that it will have much of an earth-shattering effect. It’s hard to tell how much it will impact border-town dispensaries, if at all. Texas and other states will inevitably legalize cannabis at some point. Everyone who has invested in [this] state’s industry is — or should be — well aware of that, and they need to be taking it into consideration as they plan for the future. Fortunately, we have a governor and state lawmakers who recognize the economic impact of this industry and the importance of remaining at the forefront of marijuana and hemp policy. At some point it will be no different than a lot of other competitive state industries. California has wine country, Kentucky has the bourbon trail, and many states have vibrant microbrewing, distilling and winery sectors. Colorado is well-positioned to remain a national leader on cannabis, but it will take continued work and investment from the industry and state and local governments.

Any other states we should keep an eye on going forward?

The strong passage of the adult-use legalization measure in New Jersey should boost movement in legislatures throughout the Northeast, especially in the tri-state area. Governors and lawmakers in New York, Connecticut and Pennsylvania have all expressed interest in coordinating their approaches to legalization. It may be tough in the latter due to its Republican-controlled legislature, but New York appears ready to move forward next year, and Democrats just strengthened their majorities in both chambers of the General Assembly, which should bode well.

There is also momentum building in Mid-Atlantic states like Maryland, Delaware and even Virginia, which decriminalized possession and significantly improved its medical cannabis program earlier this year. As for ballot initiatives, legalization campaigns in Missouri, North Dakota and Oklahoma that got thrown off by the coronavirus pandemic have refocused their efforts on 2022, as have the backers of the Nebraska medical initiative that got thrown off this year’s ballot. There will likely be a strong legalization initiative push in Florida, as well, but it will almost surely take place in 2024 to take advantage of presidential election turnout.
KEEP WESTWORD FREE... Since we started Westword, it has been defined as the free, independent voice of Denver, and we'd like to keep it that way. With local media under siege, it's more important than ever for us to rally support behind funding our local journalism. You can help by participating in our "I Support" program, allowing us to keep offering readers access to our incisive coverage of local news, food and culture with no paywalls.
Make a one-time donation today for as little as $1.