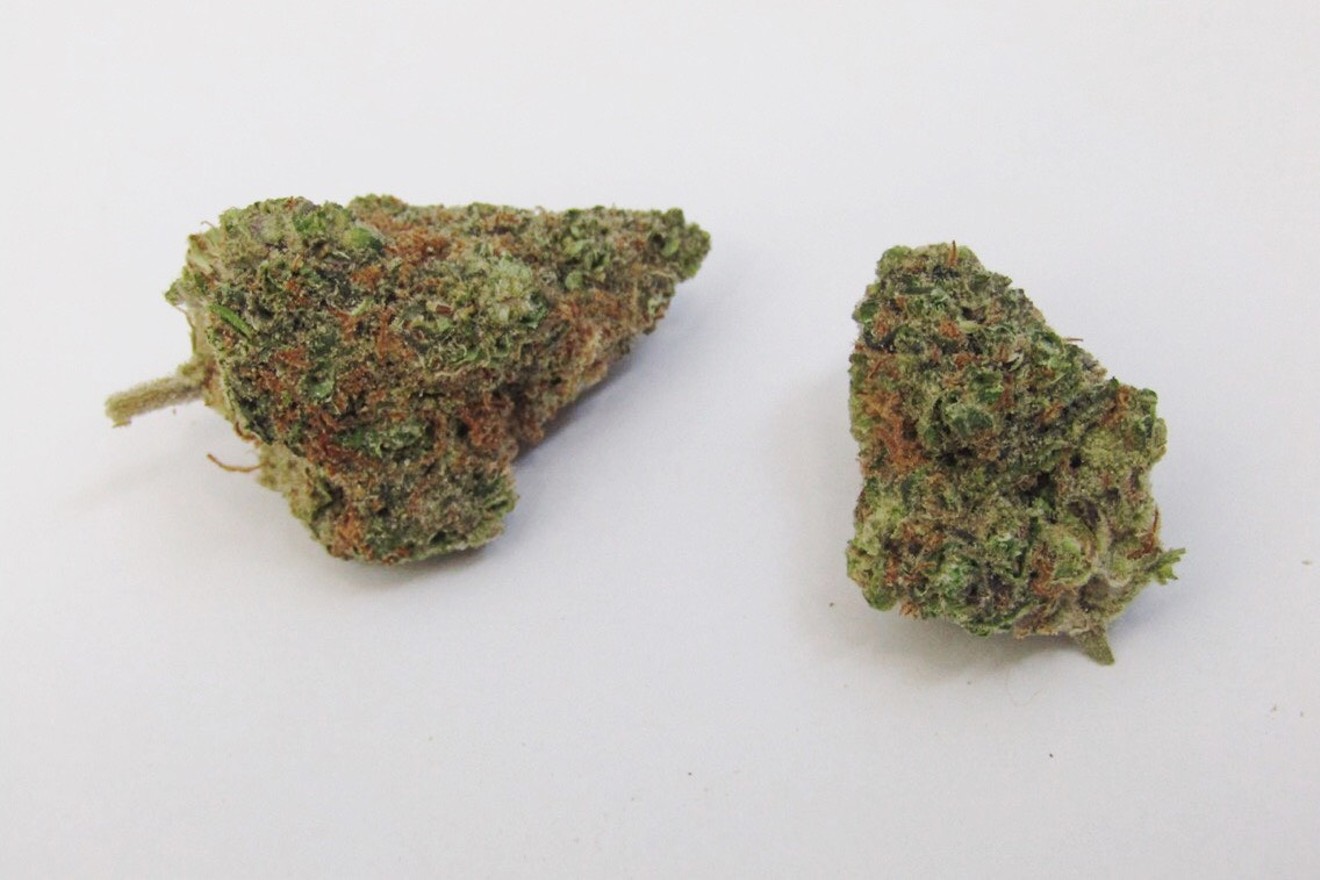 Triple the Diesel, and triple the mindfuck. Herbert Fuego
Fun fact: You can never have too much Sour Diesel. Don’t believe me? You’re about to read the word “diesel” so often that you’ll swear you were wearing a trucker hat.

I’m not saying you can never smoke too much weed — smoking is still bad, mmkay? — but if I had to puff one strain for the rest of my life, Sour Diesel would be a strong candidate. The popular sativa’s lasting, uplifting high and rubbery stank make it an easy choice for the novice and experienced alike, so naturally, the Diesel family tree has branched out to create to a number of different strains. But how many of them carry the genetics of three Diesels in one?

Triple Diesel carries high levels of humulene (hops and pine), limonene (citrus) and beta-caryophyllene (cloves) terpenes, which combine for one of the more pungent Diesel aromas both in the grow and after harvest. But the Strawberry Diesel influence gives the strain a fruity sweetness similar to that of Cherry Diesel, or a small splash of Strawberry Cough.

I hear Triple Diesel can be quite productive in small doses, but all I experience is a brain melt, similar to what I experience after mixing several strains together in one bowl. While the high helped my stress and stoked my curiosity, I can see how the effects could be debilitating or make users with lower tolerances over-anxious.

Triple Diesel is also about three times harder to find in Denver than most gassy strains. I’ve seen it at Kaya Cannabis, Pure Dispensaries, Seed & Smith and Trenchtown, as well as at Universal Herbs in concentrate form. Kaya, Pure and Seed & Smith all provide affordable versions, but the best bang for your buck is at Trenchtown, which breeds a Triple Diesel with more of an OG influence that doesn’t make your mind go blank. It’s a must-try for anyone who likes Diesels or OGs.

Looks: Denser than those of the original, Triple Diesel’s cone- and football-shaped nugs have compact calyxes, giving it the look of an indica if not for its lime-green glow and bright-orange pistils.

Smell: Those expecting that trademark aroma of rubber and gasoline can rest easy, as Triple Diesel checks off each box for lovers of Diesel and Chemdawg strains. However, Triple Diesel also has a sharp sweetness, reminiscent of Fun Dip or Pixy Sticx, with a subtle fruity back end.

Flavor: Much like its aroma, Triple Diesel’s flavor is dominated by tart flavors of rubber and skunky notes of gas. Those sour notes aren’t quite as strong as in other Diesel strains, though, with sweet, berry-like flavors — almost like tart cherries — providing a sugary twist.

Effects: This is where Triple Diesel tends to differ from its gassy relatives. Unlike Sour or NYC diesels, Triple Diesel’s high isn’t very focused, making users blissfully unaware of how distracted they are by each new shiny object. The effects are more about fun than focus, providing relaxation and intrigue for regular users, and they’re perfect for movies and channel surfing. Medical benefits have included treating minor pain, sleeping and eating disorders, and stress.

Commercial grower’s take: “It’s like seeing your friend’s brother for the first time, and you know they’re related. That pungent, rubbery, gassy smell: One whiff of it, and you know it’s a Diesel. Some people even mistake it for Sour Diesel, but there’s a little more sweet and metallic hints to it. Unsure of how stable those genetics are, though.”