Why Hasn't Hempcrete Taken Over Already? 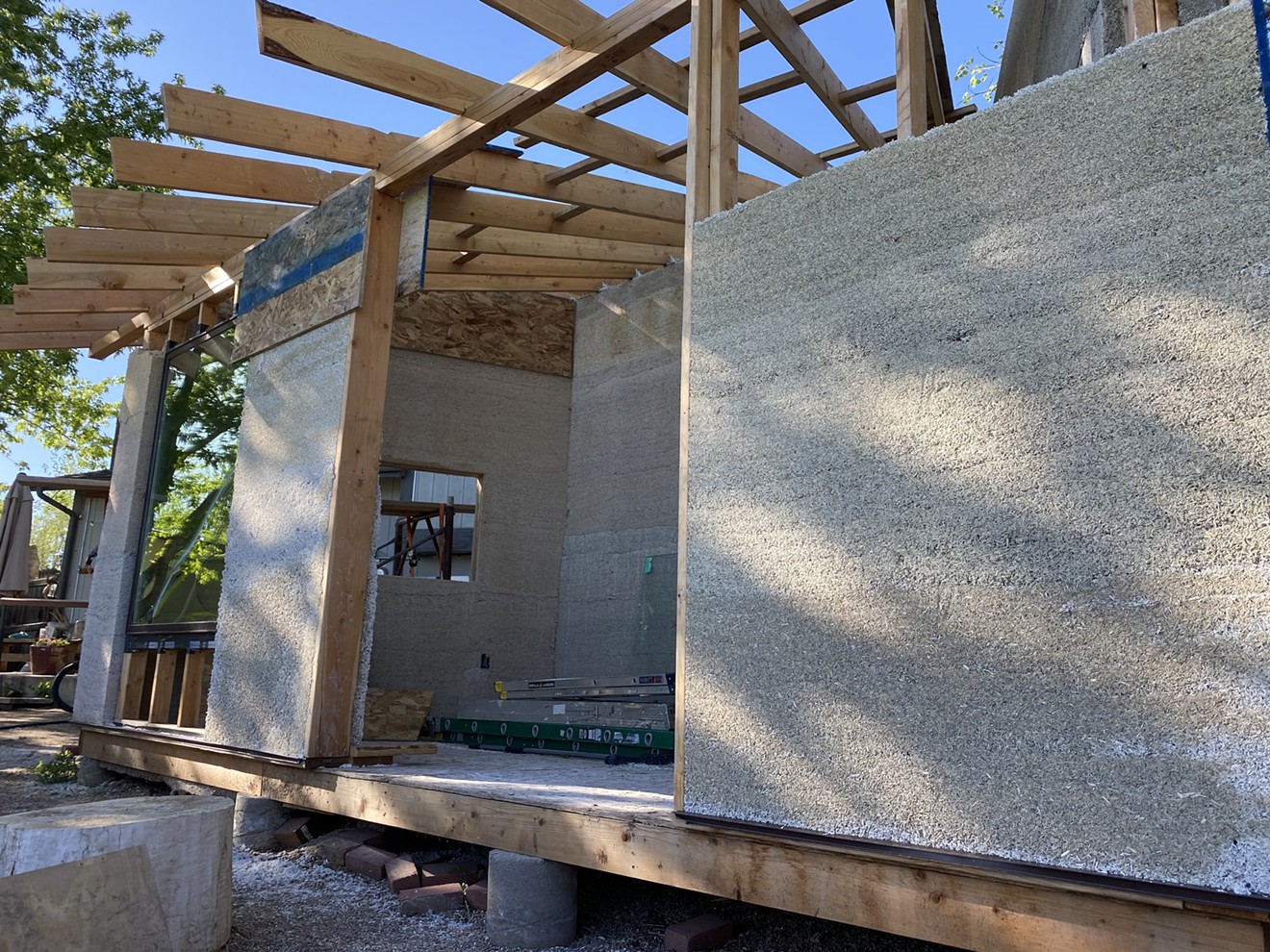 The hempcrete and hemp insulation provider is one of several hemp-centric companies in Colorado, offering contractor services to commercial and residential property owners. A concrete-like building material with a hemp base, hempcrete naturally regulates humidity and temperature more efficiently than concrete and gets stronger over time, absorbing carbon dioxide and fire at considerable rates. Rocky Mountain Hemp Build was founded by former tennis pro Eamonn McNaughton, who quickly linked up with partner Roland Gyallay-Pap to expand across Colorado. The duo is in conversation with Boulder County and other local governments about using hempcrete for affordable-housing projects, and hopes more property owners will consider hempcrete as education and environmental awareness spreads.

We caught up with the Hemp Build team to learn more about hempcrete's origins, and why some large-scale construction projects in other countries have gravitated toward it.

Westword: We're somewhat familiar with hempcrete and its wonders, but how's the insulation work?


Hemp wool insulation is great. It's actually made of 92 percent hemp and 8 percent recycled polyester. It's beautiful material, and it fits right in between studs. One drawback is that hemp wool insulation isn't currently non-flammable, so it will burn. But if you're going for wall structures, you'd only need hempcrete for a full wall system. The hemp wool is more for ceilings and floors.

Has hempcrete and hemp-based insulation been around for a while in other countries, or are the methods relatively new?

Eamonn McNaughton: Modern hempcrete has been around for about forty years. Hemp fibers were used over 1,500 years ago, just not as we know it. But there are hemp fibers in Roman concrete, and there were hemp fibers in old French bridges and structures before France became France, so hemp has been around for a long time in that sense. But France started it up again in the early ’80s, and other European countries followed suit. The Canadians picked up on it about fifteen years ago, so we're a little late to the game in America.

Gyallay-Pap: Hempcrete came out of France because of a government initiative in the 1980s. People were using Portland cement to renovate 300- and 400-year-old buildings, but they were finding that Portland cement doesn't allow moisture to travel through it like the old lime used to, so the moisture got trapped in the wall cavities, and the timber frames started rotting. So the French government started asking universities and research institutes to find a material that would allow moisture through but still have insulatory qualities. They found hemp and lime worked particularly well together. The suspicion is that the high silica values in the hemp binds with the lime particularly well. An unfinished slab of colored hempcrete.
Courtesy of Rocky Mountain Hemp Build
How far is America from using hempcrete in government contracts?

McNaughton: We're getting very close. I'm not sure about government contracts, but we're talking with people in affordable housing on a very large scale, as well as a city in Colorado interested in using hempcrete for larger projects like housing and education. The word is out about hempcrete, and people are starting to understand it. The most important part right now is getting people to understand this material and its viability, and how it can really help our current environmental situation.

Gyallay-Pap: With the climate agenda in the construction industry and achieving net-zero or going carbon-negative, hempcrete fits perfectly. For each house that's built with hempcrete, the hemp has to be grown. So far we've worked out that we need about 2.5 acres for a 3,500-square-foot home, which grows in about four months. All of that hemp material gets locked into the hempcrete, so every time you build a house, you're taking a considerable amount of carbon out of the atmosphere and putting that into your walls.

What challenges does hempcrete face? Why isn't this more popular?

McNaughton: Hempcrete is labor-intensive, and the drying time takes a while. The third drawback at the moment is hemp hurd availability. Right now, it's hard to find hurds for high quality. That's because processing is hard to find. Farmers can grow it, no problem, but there aren't enough good processors in Colorado. And if the hemp travels over 200 or 250 miles for processing, the costs go way up. So we need to get more hemp processors spread out across the country.

The dry time is about four weeks, on average, when you think about all the walls. But if you think about breaking ground on a house and the time it takes to turn your key when it's done, the timing is basically the same. And with hempcrete, you're dealing with one or two contractors: us and a plaster guy. With most building, the money suck comes from time and management, and managing four or five different contractors for a wall system takes time. But it's hard for people to see walls sit like that for a long time.

It takes a little longer to dry than concrete, but not that much more. Hempcrete is just healthier, too, for a planet and us. Concrete usually needs to be insulated with nasty materials, like foams, but hempcrete doesn't.

Gyallay-Pap: Hempcrete is not load-bearing, either, so the concrete comparison is a bit of a misnomer. But the names make people connect the two.

Do you see hemp construction making more of an impact in the residential or commercial sectors?

Gyallay-Pap: Based on the United Kingdom, there are examples of huge commercial buildings made of hempcrete there. One was a storage and distribution center for a brewery, and they used hempcrete to maintain a stable temperature without using an HVAC system. A British retail outlet has a flagship store partially made of hempcrete panels, as well. The British Museum made a hempcrete room for its most sensitive items, to ensure there's not humidity damage.

At the moment, the main sphere in the U.S. is residential, but I'm sure we'll see more commercial applications once people learn more about it.
KEEP WESTWORD FREE... Since we started Westword, it has been defined as the free, independent voice of Denver, and we'd like to keep it that way. With local media under siege, it's more important than ever for us to rally support behind funding our local journalism. You can help by participating in our "I Support" program, allowing us to keep offering readers access to our incisive coverage of local news, food and culture with no paywalls.
Make a one-time donation today for as little as $1.