Why Some Airports Carry Weed Amnesty Boxes and Denver Doesn't 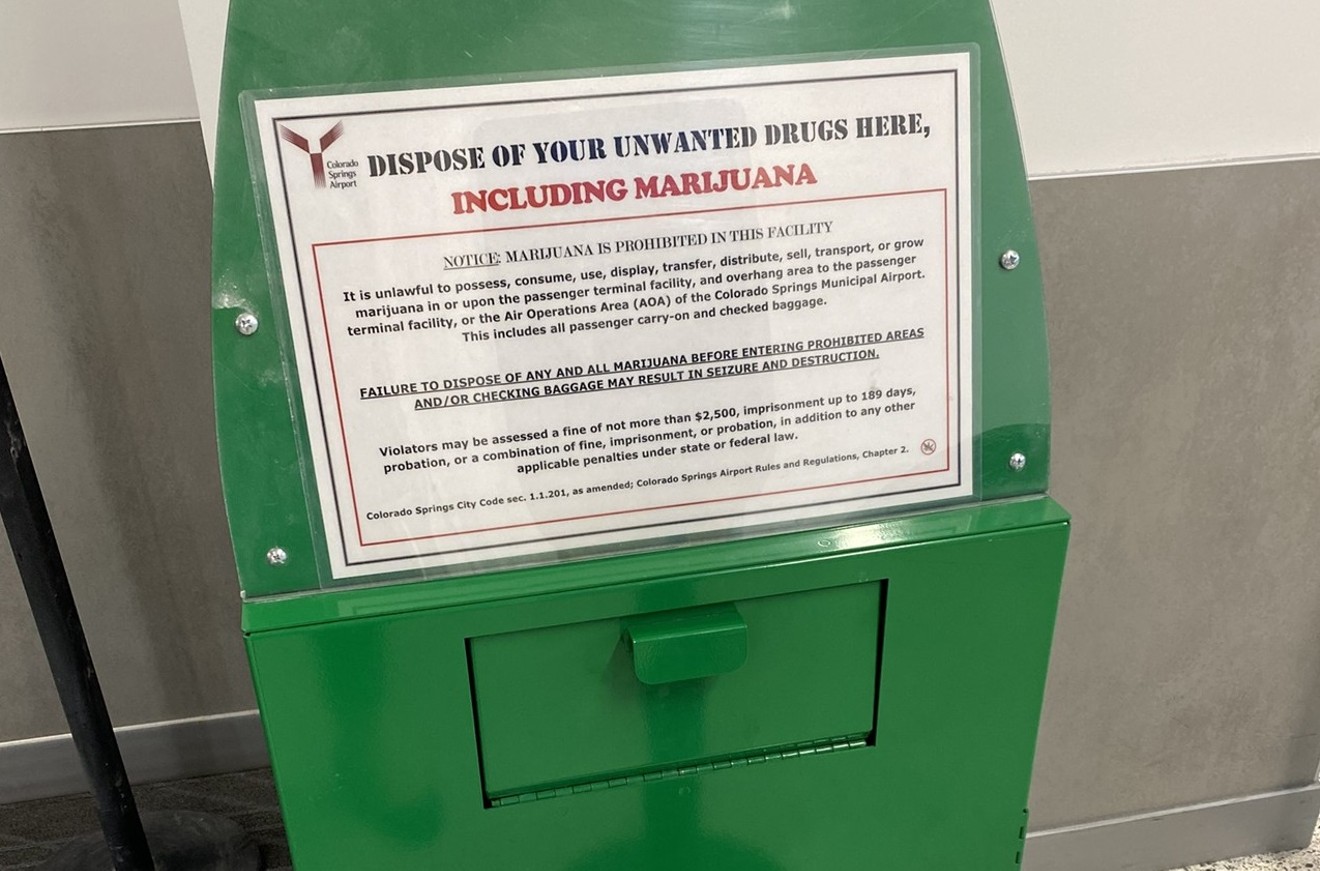 Colorado Springs Airport has collected 17,003 grams of marijuana in five years. Courtesy of Colorado Springs Airport
When leaving Colorado, most airline passengers know they're not allowed to take marijuana onto their flight. But for those who still try or simply forget what's inside their luggage, some Colorado airports have amnesty boxes for marijuana disposal before going through security.

Although Denver International Airport doesn't have such boxes, the next largest airport in the state does. According to Colorado Springs Municipal Airport officials, marijuana amnesty boxes debuted at the airport in 2014 and had collected a total of 17,003 grams of marijuana through the end of 2019.

“Marijuana can’t be transported on a commercial aircraft, because the interior of the commercial aircraft becomes federal jurisdiction once the doors are closed,” explains Aidan Ryan, marketing and communications director for the Colorado Springs Airport. “We wanted to give the passengers a way to safely dispose of marijuana instead of flushing or consuming it before they entered a commercial aircraft, committing a federal crime.”

Colorado Springs Airport has two amnesty boxes for passengers to use: one inside near the Transportation Security Administration checkpoint, and one outside the terminal by the parking lot entry doors. After the marijuana is placed in one of the amnesty boxes, the Colorado Springs Police Department destroys it in compliance with federal law.

It's worth noting that Colorado Springs doesn't allow recreational dispensaries, but Denver does. So why doesn't DIA feel the need to install similar boxes for marijuana disposal despite sharing a city with over 350 pot shops? According to DIA public information officer Emily Williams, Denver travelers are already educated about what they can take while flying, so airport officials felt there was no need to install amnesty boxes.

“Most people coming into DIA know about Colorado and federal law,” Williams says. “The vast majority of travelers are simply not bringing it into the airport; therefore, we just don’t see the need for amnesty boxes.”

If a DIA traveler is caught with marijuana at the airport, the Denver Police Department is in charge of investigating, as local police departments retain jurisdiction at their respective airports. Those carrying an ounce of marijuana or less (the limit for possession in Colorado) generally continue on without a citation, but the marijuana product is not returned to them, Williams says. Police may further investigate if someone is found carrying over the legal amount.

“The purpose of the TSA isn’t to look for marijuana, but to protect the plane,” Williams says. “But it’s still not permissible to have marijuana in the airport or on the plane, so if it’s found, they have to follow the law and take it away.”

The only other airport we found with amnesty boxes was Aspen-Pitkin County, which has installed three boxes for marijuana. The airport started with one in 2014, but eventually increased the amount to three because of how full they were getting.

"I'd imagine that some airports are having a bigger issue with finding marijuana more often at checkpoints," Williams says. "It's up to the airport on how to deal with that, and how to help passengers dispose of their weed before getting on the plane."
KEEP WESTWORD FREE... Since we started Westword, it has been defined as the free, independent voice of Denver, and we'd like to keep it that way. With local media under siege, it's more important than ever for us to rally support behind funding our local journalism. You can help by participating in our "I Support" program, allowing us to keep offering readers access to our incisive coverage of local news, food and culture with no paywalls.
Make a one-time donation today for as little as $1.