A man who allegedly assaulted fellow concert-goers is treated for inebriation at the May 2 Chance the Rapper concert at Red Rocks. Brandon Marshall
The scene inside the Chance the Rapper concert at Red Rocks on Tuesday, May 2, was typical. Fans danced and sang along. Chance was energetic. But outside, just as the concert was getting started, around 7:30 p.m., a man who was turned away at the gates went on a rampage, punching anyone he came across.

"I have never seen someone assault so many people in such a short period of time," says our photographer Brandon Marshall, who captured the incident. "The kid just started running and punching anyone in his way."

Marshall shot photographs of security personnel chasing the man down and of the man being treated in an ambulance; he was not arrested. 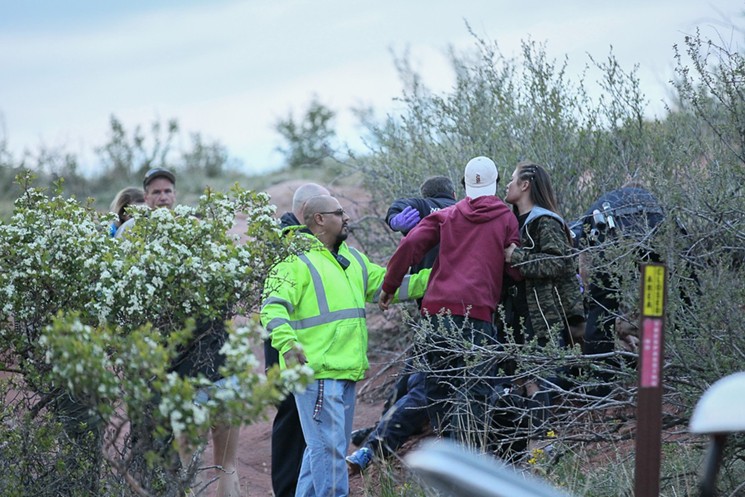 Brandon Marshall
Jordan Bishop, a spokesman for Denver Arts & Venues, which operates the venue, told Westword, "Sounds like an individual allegedly struck a couple of other concert-goers near the Trading Post, but those individuals didn’t want to press charges. The person in question was treated by medical staff for intoxication."

This sort of assault is "not all that common," at a Red Rocks concert, says Bishop. "However, it can occur. When it does, we have trained security and medical staff in place to mitigate the situation. Patron safety is extremely important to us."

The Denver Police Department made zero arrests at the concert but did issue nine citations, most for public urination, says a spokesperson for the department.

A representative of the West Metro Fire Department says, "We had six transports last night to area hospitals. All of them were non-emergent," meaning none of the cases were critical. She could not speak to the particulars of the assault incident, but says that that number of transports isn't unusual for a Red Rocks show.