The Epic Life and Tragic Death of Matt Bellinger 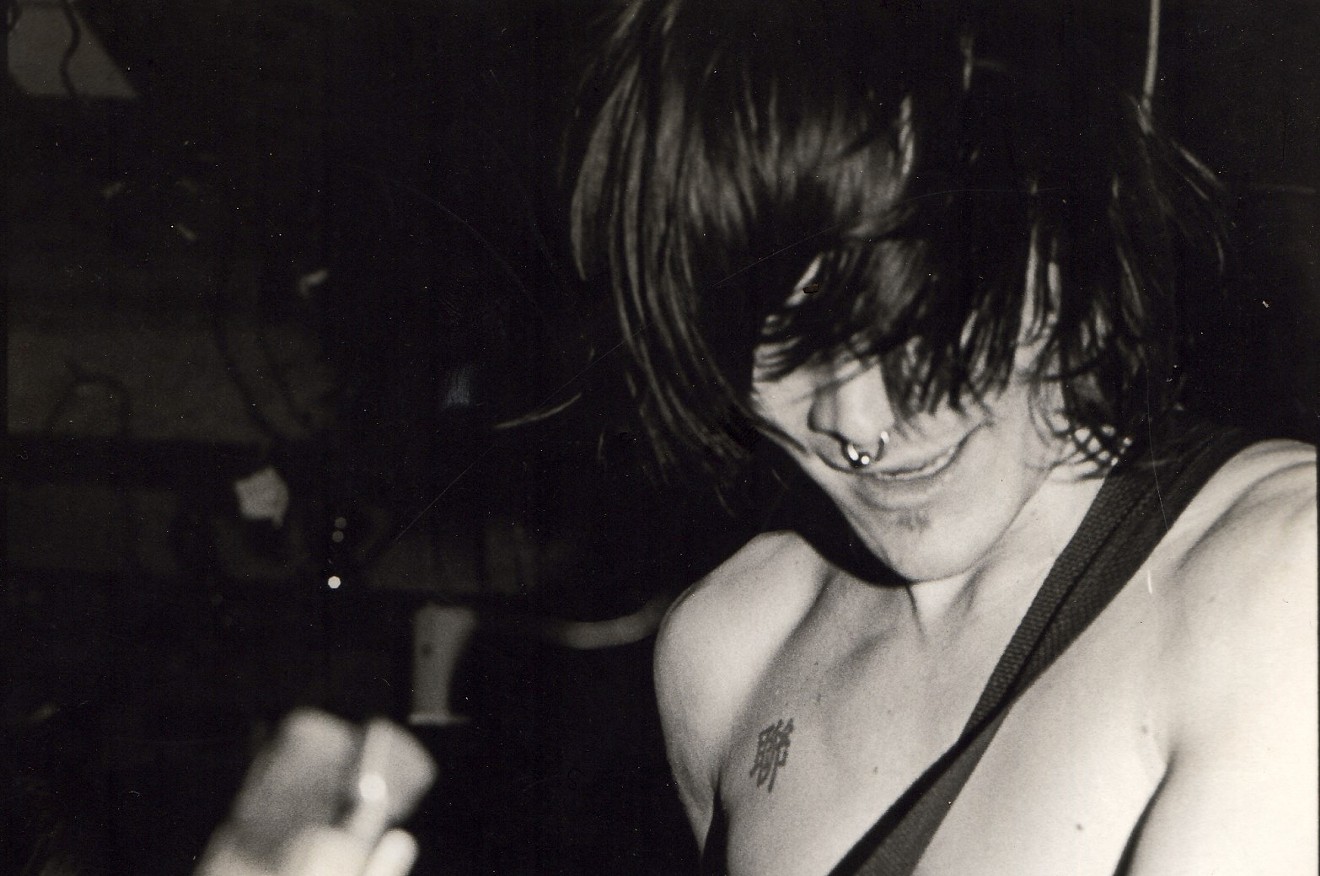 Denver musician Matt Bellinger passed away on September 7. Lauren Shugrue
Writing the bare facts about my friend Matt’s death, I’m struck by how limiting the cold tone of journalism can be:
“Denver musician Gary Matthew Bellinger — who went by Matt — died Thursday, September 7, at the age of 40. He was best known as the founding guitarist of Planes Mistaken for Stars, the popular post-hardcore band whose music has been released on independent labels including Deep Elm, Dim Mak, No Idea, Century Media and Deathwish Inc. throughout the group’s twenty-year existence. Bellinger left Planes in 2006. His subsequent Denver bands, Ghost Buffalo and Il Cattivo, never became as well known beyond Colorado, despite their excellence. He leaves behind a young son, an adult daughter, and a heartbroken community of friends, family, bandmates and fans.”

A basic obituary isn’t enough to sum up a life, let alone one that had as much impact as Matt’s.

When I met Matt in 1998, I had yet to even dream of being a journalist. Back then, I worked the cash register at Wax Trax, while Matt and the other members of Planes lived in Peoria, Illinois, where they had grown up. Their singer-guitarist, Gared O’Donnell, visited Denver frequently in the ’90s to see his mom, who lived in Colorado.
Gared became a regular customer at Wax Trax. After striking up a conversation while I rang him up one day, he and I bonded over a love of punk outfits like Jawbreaker and Dag Nasty, and we decided to keep in touch.

During one of Gared’s visits, he told me he had just formed a band back in Peoria called Planes Mistaken for Stars. I was playing in a band called the Blue Ontario then, along with a couple of the guys who had previously been in the legendary Denver emo group Christie Front Drive. My band invited Planes to tour the West Coast with us. It was Planes’ very first tour. They drove out to Denver, and together in a ragtag caravan of vehicles, we trekked west.

It was on that tour that I got to know Matt. In an article I wrote for Westword in 2004, I remembered what it was like being on the road with Planes the first time. “Their equipment was held together with duct tape and dried sweat,” I wrote, and their music “was a geyser of violence, a sloppy mess of sheer passion.” Gared was the frontman, but Matt also played guitar and sang in the band, and he was a vital part of their volatile chemistry. I’d watched many videos of punk icons like Bad Brains and Black Flag, and in Planes, I felt like I was seeing that same intensity reborn. On stage, Matt — usually shirtless and bathed in sweat — would writhe and howl like a lost soul clawing his way out of the underworld.

Matt was no angel. As I came to know him better, I realized he was living with darkness. He was also one of the sweetest, smartest, gentlest people I’ve ever known. Not always, sure. But for every eruption of desperation and rage he unleashed in concert, he had a kind word or a boyish grin ready to give. There always seemed to be a little kid hiding just below Matt’s skin, an innocence that counterbalanced even his most dire demons. 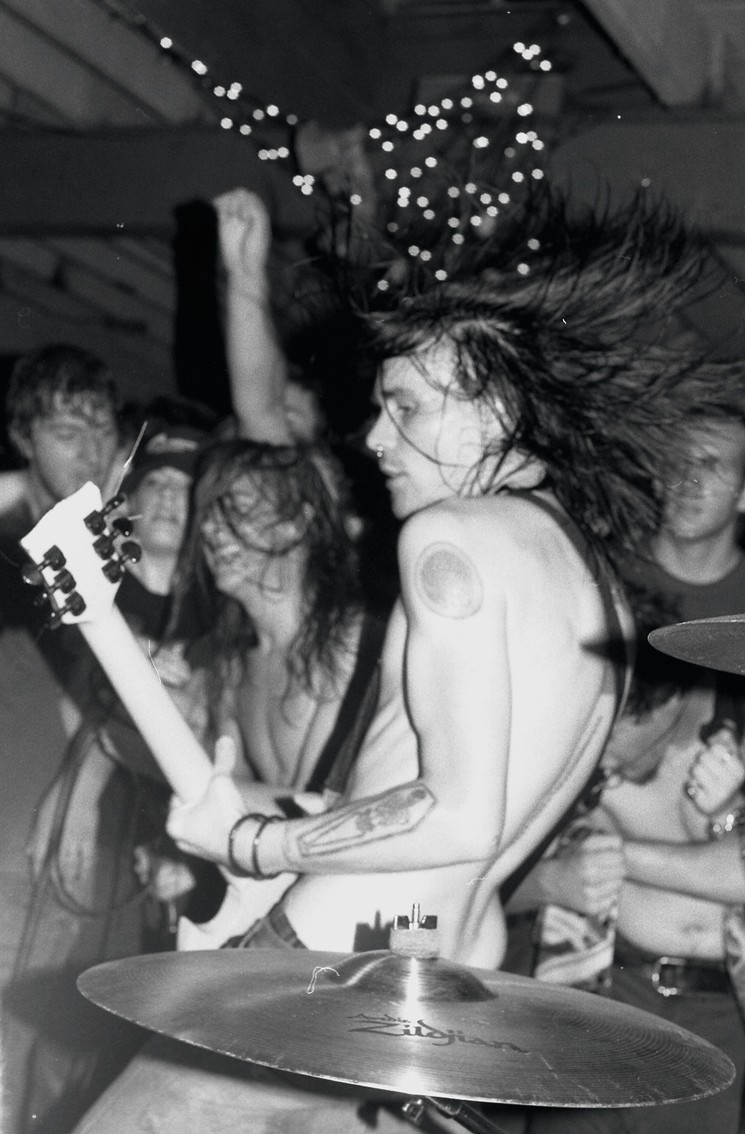 Matt Bellinger was the founding guitarist of Planes Mistaken for Stars.
Lauren Shugrue
Feeling stifled in Peoria, Matt and the rest of Planes packed up and moved to Denver in 1999. They were instantly embraced by the Denver punk scene. At the same time, they were evolving rapidly beyond punk. In 2001, their debut full-length, Fuck With Fire, was issued by No Idea — a coup for a Denver band, seeing as how the Florida-based record label also released music by such lauded national groups as Against Me! and Hot Water Music.

Over the years, Planes’ music grew more complex and intense. Gared’s smoky rasp spiraled around Matt’s bloodcurdling screams, just as their riffs ricocheted off each other chaotically. They began touring with bigger acts, from pop-punk groups like the Ataris to hardcore heroes like Converge. Melodic but never sugary, dissonant but never tuneless, Planes delivered their masterpiece, Up in Them Guts, in 2004. But even as they toured the world, including Europe and Japan, they built their scene here in Denver. They put on shows in the back yard of the house they rented near the intersection of Martin Luther King Boulevard and Josephine Street and took smaller local bands on tour with them whenever they could.

One of those smaller local bands, Red Cloud West, was mine. In the early ’00s, we hit the road with Planes and later with Ghost Buffalo, Matt’s side project. Ghost Buffalo played moody, punk-infused country rock, and so did Red Cloud West. We became, for all intents and purposes, sister bands. It was then that I fully learned the depth of Matt’s unquenchable lust for music. Like the rest of us, he’d cut his teeth on punk and hardcore. But he was just as apt to be listening to Lynyrd Skynyrd or Hawkwind or Hank Williams or Thin Lizzy. I was the one who had worked at Wax Trax for years, but Matt was the one who often schooled me about music.

Matt parted ways with Planes in 2006. It was a bitter breakup, but he weathered it, pouring all his energy into Ghost Buffalo. The group released two albums on Denver’s Suburban Home Records before coming to a halt in 2009. Within a year, he’d put together his next band, Il Cattivo. In it, he tapped back into the aggression of Planes while forging a unique form of heavy, metallic post-hardcore. Il Cattivo grew into a powerful force in the local scene, but the band became less active as Matt battled substance abuse and, eventually, bouts of homelessness. Even amid his hardest times, he was writing music prolifically. In recent years he recorded dozens of songs for a new project called Dodded Buzz, yet to be released.

It was the last music he would ever make. Matt died in an area hospital last week after being confined in Douglas County Jail. He had been arrested on numerous charges, including vehicular trespass, theft, and possession of a weapon, according to the Denver Post. It was an apparent suicide by hanging, although, as confirmed by CBS4, an investigation has been opened to conclusively determine his cause of death. When I heard the news, I couldn’t feel anything but numbness. The music scene seems to suffer an inordinate share of untimely deaths, and Matt is far from the first of my friends to die suddenly, violently, and tragically. But the older I get, the heavier these losses weigh.

The day after Matt died, one of my current bands played a show at 3 Kings. It was one of Matt’s favorite venues. The place was practically his second home, and I had shared that stage, at various times throughout the years, with every one of his bands. As I walked into 3 Kings with my equipment and carried it across the room, the sound of Planes Mistaken for Stars hit my chest like a hammer. The bar was blasting the band’s music over its loudspeakers, in memoriam. After Planes, they played Ghost Buffalo, then Il Cattivo. Matt’s absence finally sank in. I kept catching glimpses of him out of the corner of my eye, in that place where he and I had spent untold hours laughing, bullshitting, baring our souls and getting on stage to share our music with each other.

One memory of Matt keeps coming back to me. It was sometime in the early ’00s, while I was on tour with Planes. I was driving the tour van through Nevada in the middle of the night, and Matt was riding shotgun. The rest of the van was dead asleep. We had Neil Young and Crazy Horse’s Broken Arrow on the CD player. Matt and I both worshipped Neil Young, and Broken Arrow was an album we thought was insanely underrated — full of infinitely long songs that featured Young letting loose on the guitar and delivering haunting lead after haunting lead. As the barren landscape blurred by us, those lonely, wandering guitar solos made the desert feel even emptier. Matt and I didn’t fill that emptiness with words. Together, we just sat and listened.

KEEP WESTWORD FREE... Since we started Westword, it has been defined as the free, independent voice of Denver, and we'd like to keep it that way. With local media under siege, it's more important than ever for us to rally support behind funding our local journalism. You can help by participating in our "I Support" program, allowing us to keep offering readers access to our incisive coverage of local news, food and culture with no paywalls.
Make a one-time donation today for as little as $1.
Jason Heller
Contact: Jason Heller