Here are the ten biggest music stories of 2021:

Finally, some relief for venues
COVID-19 ravaged Colorado's music and live-entertainment industry in 2020, and 2021 started with many venues shuttered and workers laid off. Even when shows were allowed to go on, they were at drastically reduced capacities. But thanks to Shuttered Venue Operators grants, a program established by the Small Business Administration and signed into law last December, $16 billion in help was finally doled out to music venues, theaters and promoters this year — many of them in Colorado.

Red Rocks has a record year
While Colorado's most famous venue saw some drama over decibel limits this year, that didn't prevent Red Rocks from being named the world's most-attended venue by Billboard, with nearly a million attendees. As pandemic safety restrictions were loosened, Red Rocks came back with a bang and, at 177 concerts, broke its own record for the number of shows it hosted from April through November. Other ticketed events included yoga classes and the first-ever Winter Film on the Rocks.
click to enlarge 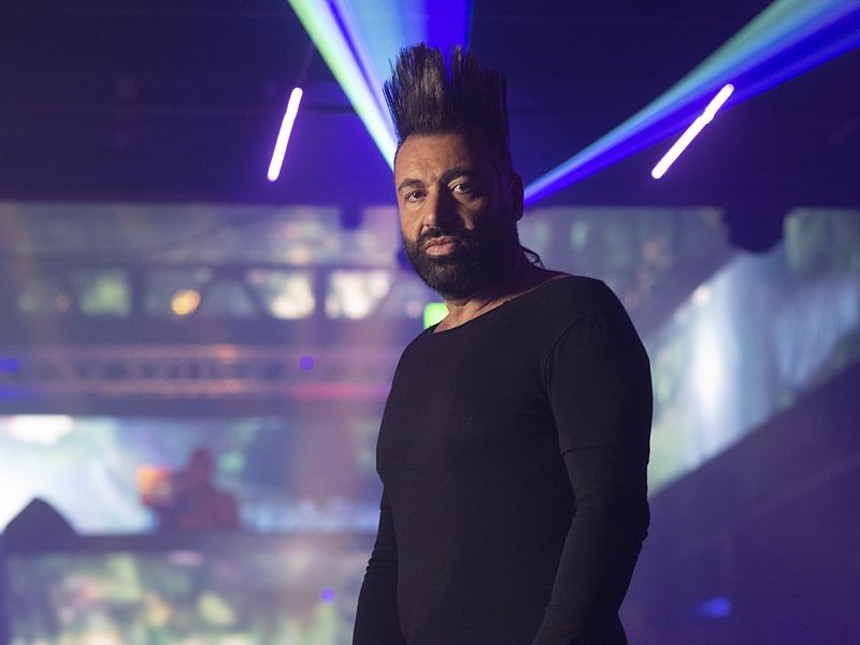 Valentes Corleons inside Beta.
Evan Semón
Beta Event Center goes to court
The legendary Beta Event Center is in two fights with the city, with action spilling into the new year. Owner  Valentes Corleons argues that Denver officials are out to get him, and that the crimes attributed to the club (including drug dealing and a patron carrying an illegal concealed firearm) aren't linked to the venue itself. In December, an administrative hearing officer determined that Beta should lose its liquor and cabaret licenses; the final decision will come from the head of the Denver Department of Excise and Licenses. Meanwhile, Beta has a hearing pending on charges that it's a public nuisance. Once considered one of the world's best clubs, Beta has fallen far. Nathaniel Rateliff
Brandon Johnson
Nathaniel Rateliff buys theSkylark
The Skylark Lounge was put on the market in May 2020 — not because of COVID, but because then-owner Scott Heron wanted to spend more time on his personal hobbies and pursue a career in solar energy. This June, Nathaniel Rateliff — yes, the leader of Nathaniel Rateliff & the Night Sweats — joined forces with friends and investors to take over the venue. This isn't Rateliff's first foray into bar or venue ownership; he and his bandmates, along with former hi-dive owner Josh Terry, opened the Overland in the former Bushwacker's space on South Broadway in 2016. Although that deal didn't work out (the place is now the Brutal Poodle), if the Skylark deal goes as well as the rest of Rateliff's year, it should be flying high. In 2021, Rateliff and his band performed a sold-out show at Red Rocks, headlined Saturday Night Live and Vail Snow Days, performed on The Tonight Show and released an album of a 2020 Red Rocks performance.

Streets Denver closes
After twenty years, Streets Denver (aka Streets of London) closed its doors for good in March, four months after the death of its owner, John Elliott, in November 2020 after a second battle with COVID. “It’s one more small venue/landmark/locally owned small business that caters to our community that has disappeared this past year, leaving people feeling displaced after a year of near-isolation,” Beth Hardin, who was the general manager at Streets, told Westword. “It’s important to note that many people have been relieved to find out that it will likely be a gay bar as opposed to a downtown douchebag bro bar. We just hope that they will be as welcoming to their misfit rocker allies as we try to be for the alphabet-mafia community.” In April, Steven Alix, who owns X Bar Denver, took over the former punk institution and reopened it as gay sports bar Tight End. Mercury Cafe
Brandon Marshall
Mercury Cafe sells
After nearly fifty years of running a cultural/community space, Marilyn Megenity was particular about who would become the next owner of the Mercury Cafe. She wanted it to retain its open spirit, its healthy menu and a lineup of events ranging from political to musical to dance lessons. So Megenity interviewed buyers and performed "community rituals" before she sold the building she'd bought in 1990 for $157,000 to Danny Newman, who bought My Brother's Bar with his family in 2017, and his partner, Austin Gayer; they paid over $2 million for the place. More important than the price was the fact that Newman had kept his pledge to keep My Brothers Bar almost the same as it had been before, and promised to do the same with the Merc. "I think the future is really bright for the Mercury," Megenity told Westword. "I think having some young, enthusiastic energy excited about taking care of the Mercury can only mean the Mercury is going to flourish."

Kyle Harris
The Velveteers open for Guns N' Roses
When Wolfgang Van Halen had to cancel his opening gig for Guns N' Roses at Dick's Sporting Goods Park after testing positive for COVID-19, local act the Velveteers rose to the occasion. This was just one of many achievements for the rock band this year. Singer-guitarist Demi Demitro and drummers Baby Pottersmith and Johnny Fig also played the main stage at the Westword Music Showcase in September (and were featured on the cover of Westword); released a new album, Nightmare Daydream, in October; headlined the Gothic Theatre in November; and will join Greta Van Fleet for the North American leg of the iconic band's tour, which kicks off next March.
click to enlarge

The Matchbox has weathered the past decade in a much-changed neighborhood.
Scott Lentz
Shooting outside the Matchbox
Branden Smith, a former Marine who'd worked security at Live Nation before getting furloughed last year, was at the Matchbox in June, attending one of the bar’s long-running Taking Back Monday punk/emo industry nights. Live Nation talent buyer and Black Sheep owner Geoff Brent, who has deejayed the event for the past four years, was spinning music. It was all business as usual until near the end of the night, when Asenai Zigita, who'd punched a woman in the face, reportedly shot Smith in the leg and shoulder outside the bar after Smith tried to get him to leave. Zigita was arrested and charged with criminal attempt to commit murder in the first degree and assault in the first degree. It was just one of many violent episodes in LoDo and RiNo this summer, but it definitely shook up music fans.

eTown celebrates thirty years
Nick and Helen Forster broadcast the first episode of eTown on Earth Day 1991, as a way to feature live music from every end of the spectrum while also introducing listeners to information on subjects that weren't particularly popular at the time, like the environment and sustainability. Over the next thirty years, the Forsters turned eTown into a very successful nationally syndicated radio show that has hosted around 900 headliners, including Joan Baez, Keb’ Mo’, Pops Staples, Steve Earle, Randy Newman, Dr. John and Marty Stuart, and moved into its own eTown Hall in 2012. As it celebrated its thirtieth anniversary in April, eTown collected another honor: It was inducted into the Colorado Music Hall of Fame, which just marked its tenth anniversary.

Deaths
The Denver music scene lost many fixtures in 2021, including concert photographer Soren McCarty in April, Brothers of Brass drummer Krishnaswami Ramachandran Azad in May; Brethren Fast bassist Mik Messina and Denver native Chuck E. Weiss (who was the inspiration for the Rickie Lee Jones song “Chuck E.’s Love”) in July; Jennifer Gelvin and Keith Rouse, both members of the Fabulous Boogienauts, who died a few weeks apart in September; and longtime Goosetown doorman and DJ Tommy Borrero in October.
KEEP WESTWORD FREE... Since we started Westword, it has been defined as the free, independent voice of Denver, and we'd like to keep it that way. With local media under siege, it's more important than ever for us to rally support behind funding our local journalism. You can help by participating in our "I Support" program, allowing us to keep offering readers access to our incisive coverage of local news, food and culture with no paywalls.
Make a one-time donation today for as little as $1.
Emily Ferguson is Westword's Culture Editor, covering Denver's flourishing arts and music scene. Before landing this position, she worked as an editor at local and national political publications and held some odd jobs suited to her odd personality, including selling grilled cheese sandwiches at music festivals and performing with fire. Emily also writes on the arts for the Wall Street Journal and is an oil painter in her free time.
Contact: Emily Ferguson