The October 2020 booking photo of Matthew Dolloff. Denver Police Department
The Denver District Attorney's Office plans to drop a second-degree murder charge against Matthew Dolloff, the 9News security guard who fatally shot Lee Keltner, 49, during a so-called "Patriot muster" and a separate BLM soup drive at Civic Center Park on October 10, 2020, because prosecutors aren't confident they can overcome his claim of self-defense.

"I can confirm that the DA has told us they plan to dismiss on March 21," attorney Doug Richards tells Westword. The news was first reported by the Denver Post.

Denver DA's Office spokesperson Carolyn Tyler echoes Richards's revelation. "Having fully considered the facts and circumstances surrounding the charges, today we informed Lee Keltner’s family members that we will soon dismiss the criminal case against Matthew Dolloff," she states. "In line with our ethical obligations, we cannot overcome the legal justifications of self-defense or defense of others. We are not able to prove guilt beyond a reasonable doubt."

The shooting followed a confrontation between muster supporter Keltner and a BLM protester who was caught on video yelling "Mace me, motherfucker!" Keltner was spraying a chemical agent when Dolloff opened fire. 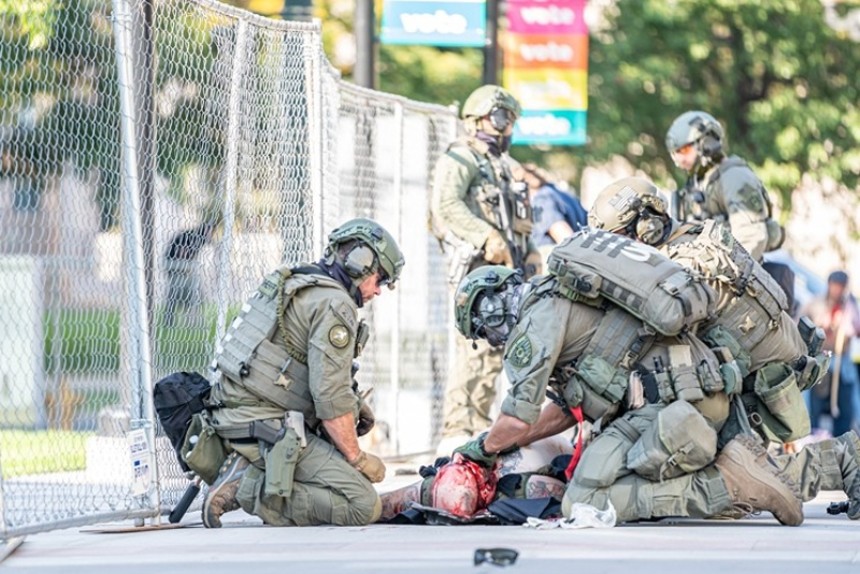 Lee Keltner on the ground, outside Denver Civic Center.
Photo by Michael Emery Hecker
At the time, Dolloff was working as a security guard for 9News, which had hired him as an independent contractor through Pinkerton, the venerable security company. But afterward, the station learned that Dolloff wasn't licensed to perform this job in Denver. 9News has also maintained that it had no idea Dolloff was armed; his concealed-carry permit was issued through Elbert County, whose sheriff canceled it following Keltner's death.

Pinkerton and Isborn Security Services, Dolloff's actual employer, are no longer licensed to operate within the City and County of Denver, and they can't reapply until 2025.

As for 9News, the station sought to distance itself from Dolloff's actions as soon as his connection to the outlet became public. Its statement from October 12, two days after the shooting, reads: "For the past few months, it has been the practice of 9News to contract private security, through an outside firm, to accompany our personnel covering protests. Pinkerton, the private security firm, is responsible for ensuring its guards or those it contracts with are appropriately licensed. 9News does not contract directly with individual security personnel."

Mark Cornetta, general manager for 9News and senior vice president with the station's parent company, TEGNA, offers no comment about the report that Dolloff will no longer be prosecuted.
KEEP WESTWORD FREE... Since we started Westword, it has been defined as the free, independent voice of Denver, and we'd like to keep it that way. With local media under siege, it's more important than ever for us to rally support behind funding our local journalism. You can help by participating in our "I Support" program, allowing us to keep offering readers access to our incisive coverage of local news, food and culture with no paywalls.
Make a one-time donation today for as little as $1.