Nearly Thirty Years After Its Humble Local Beginnings, UFC Is Back in Denver 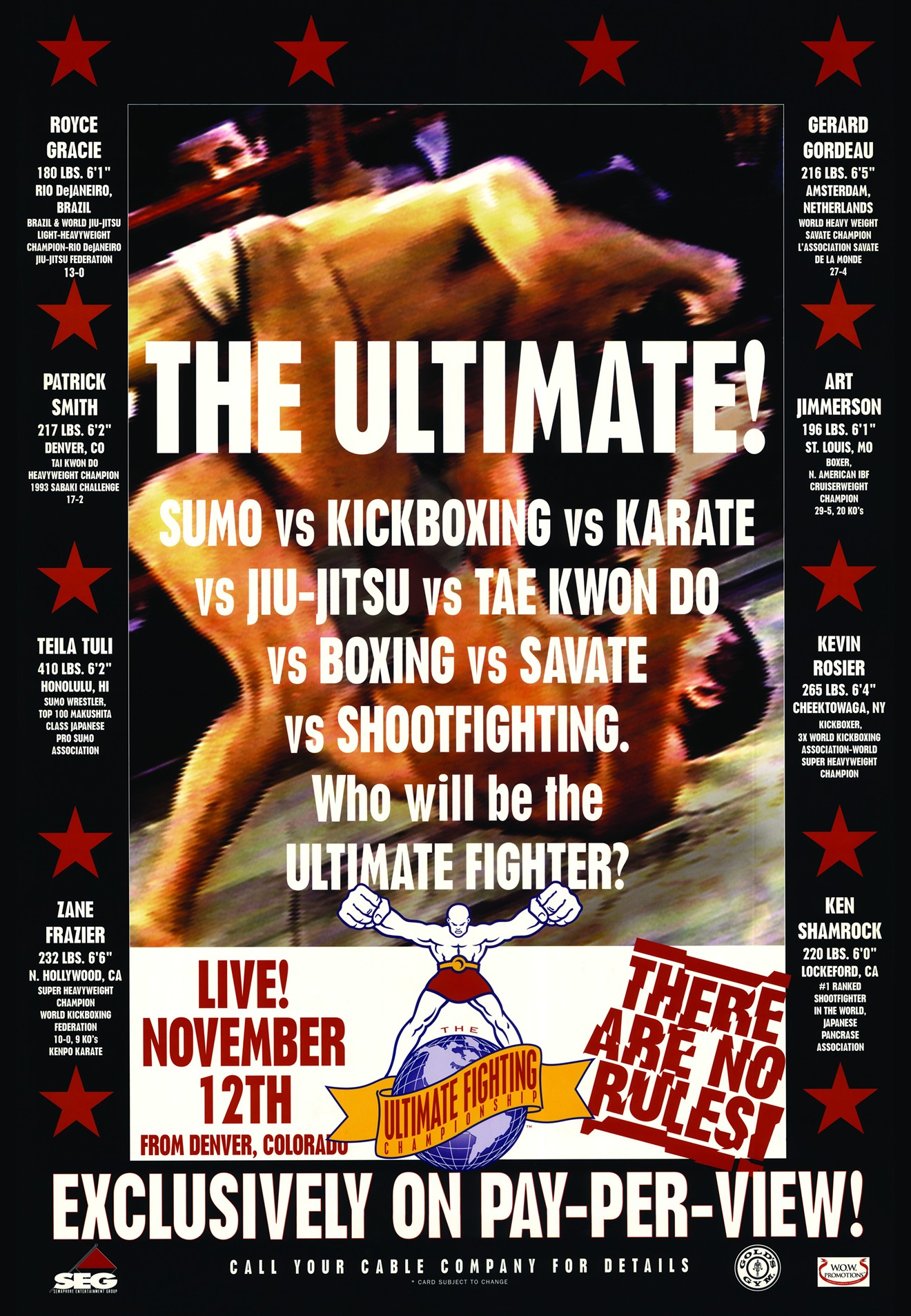 The original promotional poster for UFC One. Courtesy of UFC
UFC is coming to Denver on Saturday, November 10, for a night of big-ticket fights at the Pepsi Center to celebrate the league's 25 years of existence.

UFC, which now generates billions of dollars in revenue and is the trendsetter for mixed martial arts competitions, actually got its start in Denver. And when it hosted its first fights on November 12, 1993, for what later became known as UFC One, UFC was more akin to a Roman gladiator spectacle, minus the swords and shields.

In the early ’90s, the Ultimate Fighting Championship searched the U.S. for a venue to host a tournament pitting warriors from various fighting disciplines against each other. The event was to be bare-knuckle, without the small gloves used today by MMA fighters.

At the time, Colorado didn't have its own boxing commission, which meant that no sports administrator would be able to formally oppose the event. That's why the state was so attractive to the event's promoters.

"UFC 1 promoter Art Davie researched every major city in the U.S. to determine which city would allow for the fight card to be executed the way he had envisioned, and Denver wound up being the best city for that to happen," says UFC.

During the fights, Woody Paige took to the pages of the Denver Post to blast the first Ultimate Fighting Championship in an article titled "Ultimate rip-off...their heads." In the piece, Paige tore into the event, saying that the Ultimate Fighting Championship "sounds like the perfect night for people who love monster-truck shows and stop at automobile accidents to stare."

That first tournament, which took place at McNichols Arena, had just a few rules: no eye gouging, groin shots or biting. Still, a fighter got hit in the groin and clumps of hair were torn from his scalp. There were no judge's scores, weight classes or time limits, as there are now.

The evening's first fight, which pitted Teila Tuli, a 420-pound sumo wrestler, against Dutch kickboxer Gerard Gordeau, did not disappoint. Tuli sumo-charged Gordeau, fell onto the octagon's fence, then received a devastating Gordeau kick straight to his right cheek. Tuli lost multiple teeth, and the pay-per-view TV commentators noticed some flying toward them.

Writing for the Denver Public Library's website in 2016, special-collections librarian Brian Trembath pointed out that not only did some teeth fly out of Tuli's mouth, but two of them got stuck in Gordeau's foot and had to later be surgically removed. The teeth-smashing match was quickly called, since cuts on Tuli's face started gushing blood.


Legendary MMA fighter and wrestler Ken Shamrock also fought in the event, winning his first fight but losing the next. It was his opponent in the next fight, Royce Gracie, a Brazilian jiu-jitsu master, who ended up as the ultimate fighter at the end of the night.

Gracie, whose father, Helio Gracie, founded the art of Brazilian jiu-jitsu, dominated all of his fights. Despite being the smallest man of the bunch, Gracie beat one-gloved boxer Art Jimmerson, forced Ken Shamrock to tap out, and finally took down dental demolisher Gordeau.

Mike Nickels, a Denverite who once competed in the UFC and now runs the White Lotus tattoo shops, looks back on that night fondly, despite the gore.

"To some people, it was human dogfighting," he says. "To martial artists, it was a demonstration of different forms and showed how different fighting styles compare."

The UFC One production stands in stark contrast to today's polished productions. It was just awkward. The animations between fights were clunky, and the TV program featured way too many commentators, including NFL Hall of Fame running back Jim Brown. Having never worked on a UFC tournament together, the commentators lacked chemistry and spoke over each other.

The crowd might as well have come straight from a monster truck show. Before the final fight between Gracie and Gordeau, Gracie's father, Helio, received an award for his contribution to martial arts. One of Royce Gracie's brothers announced the award from the center of the octagon, only to be loudly booed by the crowd. Someone even told the Gracie brother to "shut the fuck up" while he was speaking.

Another key difference between today's UFC and UFC One was the level of hype before the fights. It only cost $14.95 to screen at home, and tickets were available at the door; clearly, it wasn't the next iteration of Frazier-Ali. And given its lack of notoriety at the time, UFC One didn't have the same pre-fight drama that MMA fans have grown accustomed to seeing in fights involving someone like Conor McGregor.

But the tides did turn. McCain — and many other initial skeptics — eventually began to appreciate MMA fights and UFC, and the sport and league have grown exponentially since their humble beginnings in 1993. Rules have been added, so that there are now time limits and judge's scores. But none of that is to say that audience members sitting in the front row of a UFC fight aren't still at risk of getting sprayed with blood after a knockout punch.

On November 10, fifteenth-ranked featherweight Yair Rodriguez will take on number-ten Chan Sung Jung, aka the Korean Zombie. Denver's very own Donald Cerrone will also be competing, in the welterweight category, that night. One-gloved boxer Art Jimmerson will be in attendance, as the event will also pay homage to the fights 25 years ago that served as the basis for the combat-league colossal that UFC is today and the trend that Denver set by hosting the tournament.

"Obviously, it took a long time for athletic commissions to understand the concept of MMA, and it was just two years ago that we finally got MMA legalized in all fifty states, so Denver was certainly ahead of the curve in terms of embracing this new sport 25 years ago," says UFC.

Tickets for the November 10 fight night at the Pepsi Center are $25 to $150; find them here.
KEEP WESTWORD FREE... Since we started Westword, it has been defined as the free, independent voice of Denver, and we'd like to keep it that way. With local media under siege, it's more important than ever for us to rally support behind funding our local journalism. You can help by participating in our "I Support" program, allowing us to keep offering readers access to our incisive coverage of local news, food and culture with no paywalls.
Make a one-time donation today for as little as $1.