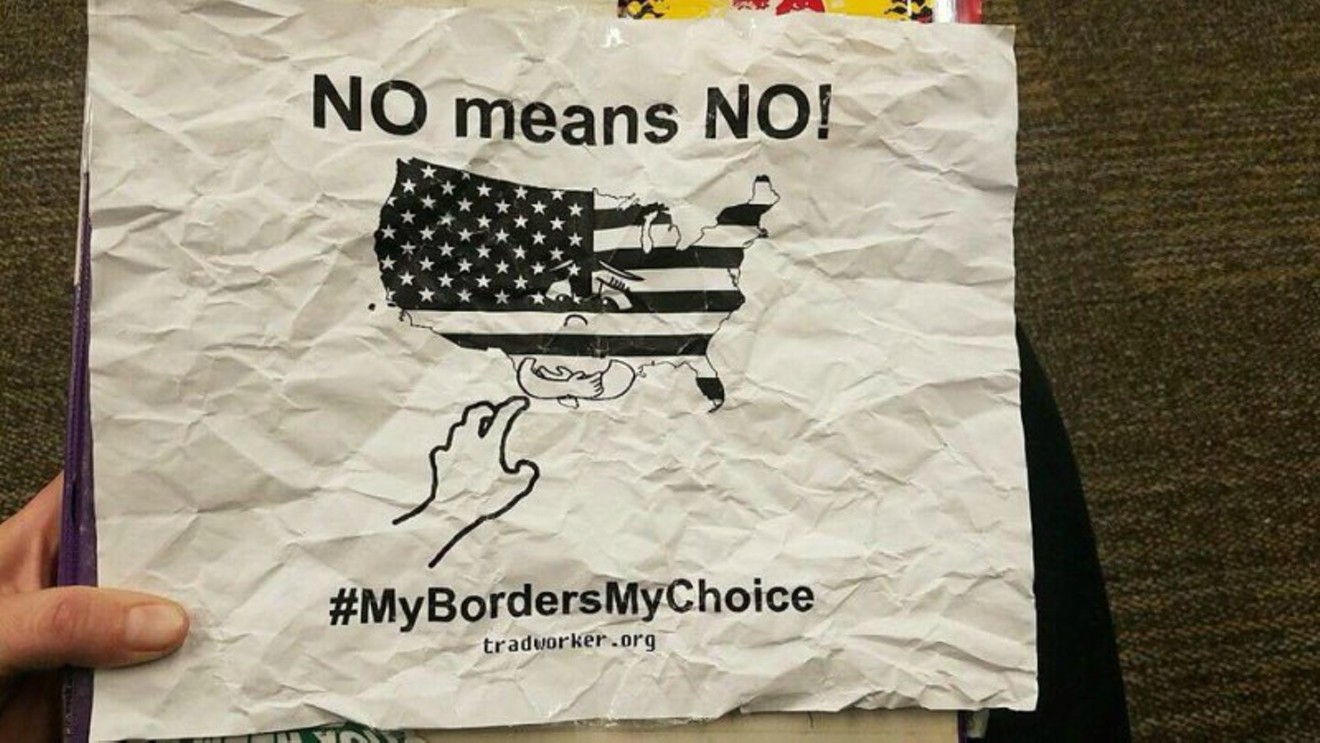 A photo of a racist flier shared by the CSU Intersectional Activism Network. Facebook
At 5:30 p.m. tonight, February 2, at Colorado State University, members of an anti-fascist organization are expected to come face to face with alleged neo-Nazi recruiters from the Traditionalist Worker Party, which has been identified as a hate group fueled by white-supremacist views. The potential for trouble has led CSU president Tony Frank to send out a campus-wide denunciation of the TWP that makes prominent mention of a safety plan developed in the hope of preventing violence.

Rising tensions over the past few days have been documented by the Rocky Mountain Collegian, CSU's first-rate student newspaper, in advance of "Smashing Socialism," a talk to be given this evening at the Lory Student Center by Charlie Kirk, founder and executive director of Turning Point USA, a conservative national group that says its mission is "to identify, educate, train, and organize students to promote the principles of freedom, free markets and limited government." Among the groups expected to show up at the event, according to the Collegian, are the Northern Colorado Anti-Fascist Collective and the TWP.

Why would these natural antagonists be drawn to the gathering? Turning Point USA tries to portray itself as mainstream, but critics such as CSU student Hank Stowers, who wrote a scathing op-ed published by the Collegian, charges the outfit with having a "history of condoning misogyny and rape apologia in Colorado." In his view, this philosophy has a corollary in the approach of the Traditionalist Worker Party; he accuses them of harboring "similar doctrines of inequality, separatism and hatred."

In the meantime, racist fliers have started popping up on CSU's campus. As seen in the image at the top of this item, they read "No Means NO!" and include the hashtag #MyBordersMyChoice and the web address of the TWP.

Around the same time, the Northern Colorado Anti-Fascist Collective Facebooked photos of purported TWP members, including a shot said to depict the local leader, Joshua Yeakel.

The Northern Colorado Antifa Collective identifies the person on the right in this photo posted on January 30 as Joshua Yeakel.
Facebook
Last year, Yeakel appeared in this space as part of a post headlined "How a Colorado Senator Wound Up Posing With a White Supremacist."

As we pointed out at the time, Yeakel has been linked to white-supremacist activity on Capitol Hill. A March 21 post by Rocky Mountain Antifa said Yeakel had posted on forums associated with the Daily Stormer, a website that appeals to extremist groups, under the moniker K.R.Kroenen, a reference to a Nazi character in the comic series Hellboy. The item stated that Yeakel "used to be involved in the Occupy movement and Denver's squatting scene, but after a recent four-month stay in jail decided to convert to neo-Nazi ideology."

Rocky Mountain Antifa also tied Yeakel to William Scott Planer, who wound up on the radar of Denver's branch of the Anti-Defamation League after he was arrested in Colorado Springs for vandalizing the Chabad Lubavitch Jewish Center in 2017; he was subsequently held on a $500,000 bond related to a felony charge in California, where he allegedly attacked a protester during a white-supremacist rally.

About Planer, the ADL wrote:


Originally from Sacramento, Planer has been on the ADL’s Center on Extremism’s radar for a number of years. He is associated with at least two known white supremacist groups, including the Golden State Skinheads (GSS), a California-based racist skinhead crew founded in 2003, and the Traditionalist Workers Party (TWP), a white supremacist group led by Matthew Heimbach and Matt Parrott.... Planer also traveled to Pikeville, Kentucky, to attend an April 29, 2017, white supremacist rally organized by the TWP and the neo-Nazi National Socialist Movement. During the gathering, Planer, wearing a shirt bearing the TWP emblem, repeatedly gave the Nazi salute.

Yeakel made no such gestures when he posed alongside state senator Kevin Lundberg at a pro-Donald Trump rally at the Colorado State Capitol last July 4. Instead, he stood with his arms at his side while proudly sporting a Daily Stormer T-shirt.

A photo featuring Joshua Yeakel and Colorado Senator Kevin Lundberg from July 4, 2017.
File photo
After Yeakel shared the photo of him and Lundberg under the slightly altered handle K.K.Kroenen (the change makes the initials read "KKK"), the senator insisted that he didn't know anything about the Daily Stormer and had agreed to participate in the photo simply because he sees doing that type of thing to be a public servant's duty.

Yeakel's presence on the CSU campus raises the prospect of a confrontation between TWP backers and the Northern Colorado Antifa Collective, which has been planning to demonstrate against Turning Point USA and Kirk for weeks.

On January 11, the group posted this: "CSU’s chapter of Turning Point USA (TPUSA), a bigoted hate group cleverly disguised as a conservative free-market-promoting college recruitment club, is hosting their founder and executive director Charlie Kirk who plans to speak on 'smashing socialism.' The group, TPUSA, harbors members who consistently display anti-LGBTQ, racist, xenophobic, and nationalistic ideals and practices.* To allow Charlie Kirk, the founder of this group, to speak on campus is to continue normalizing the hate speech and dangerously prejudicial sentiments this group gives sanctuary to. We invite concerned community members, students, and targeted/affected parties to show up to the Lory Student Center at 5:30pm on February 2nd. The end time is 9:00 but people may stay as long as they wish. We intend to articulate our disgust and disappointment with CSU for allowing a hate group to speak on campus. We implore you: stand up alongside us and voice your disgust and disappointment as well."

With tempers rising, CSU president Frank weighed in yesterday with an open letter titled "No Place for Hate at Colorado State." In it, Frank excoriates the Traditionalist Worker Party ("The TWP goes by various names online, but let me keep this simple: a Nazi is a Nazi is a Nazi") and says of the Turning Point USA event, "We have a security plan in place for the event and surrounding areas, and our priority will be to protect the public safety while also allowing people to exercise their constitutional rights to peaceful protest and assembly."

Here's Frank's letter in its entirety:

President Frank: No Place for Hate at Colorado State

In recent days, a batch of anti-immigration flyers were posted around our campus, attributed to the Traditionalist Worker Party, a white nationalist organizing group that is attempting to actively recruit on college campuses across the country.

Tony Frank, president of Colorado State University.
coloradostate.edu
This university strongly respects the Constitution and the First Amendment, and the right of even repugnant viewpoints to be spoken and debated in the public space. But Colorado State University also has the right to publicly assert what it values and stands for — so I’d like to take this opportunity to do that here.

The TWP goes by various names online, but let me keep this simple: a Nazi is a Nazi is a Nazi. And the members of the Traditionalist Worker Party are unapologetic Nazis who advocate murdering all those who don’t align with their worldview. They don’t even pretend to keep this a secret. They put it out there unashamedly for anyone who wants to read it.

It’s easy, for those of us from a certain privileged vantage point, to dismiss this sort of extremist rhetoric as pathetic, ignorant, unworthy of our attention. But historical precedent is clear as to why that’s a mistake.

Such groups are insidious. They generally hide and grow in the dark, avoiding the direct light of day. When they emerge, they frequently align themselves with groups who hold more mainstream views, as was the case with the anti-immigration flyer scattered on our campus. Their ideas then play into the prejudices and fears of people who would never intentionally align themselves with someone who openly identified as a Nazi — even people whose grandparents or great-grandparents fought and died to stop the Nazis in World War II. When these groups edge in and gain a foothold wherever there’s one to be gained, the erosion of human decency quickly follows.

So let’s stop this here. Let’s shine a bright light on this and call it for what it is. Colorado State University denounces the racist, homophobic rants of this and any other white nationalist organization that attempts to gain inroads on our campus or in our community. We denounce the sexist, rape-supportive culture they idealize. We denounce their stigmatizing of religions they do not share — and their attempts to claim our national identity as exclusively their own.

And we vehemently reject their claim to the values of America, patriotism, courage, conservatism, character — and the Christian faith. Their base and immoral ideology, is, indeed, unwelcome and repudiated at Colorado State University. And even as we honor the sacrifice of those who fought to assure we all have a voice by allowing even this voice of evil to be expressed, we stand together so that no member of our community hears this voice alone and fears that they need face it alone.

Let me also make a firm distinction here. This coming Friday night, a group of our students has invited a speaker to campus to speak about his views against socialism. These students have followed all appropriate steps to bring a speaker to campus who has no track record of causing disturbances on college campuses. Nevertheless, the recent appearance of white nationalist rhetoric on campus has been conflated with this speaker and caused concerns about the safety and security of religious groups, people of color, and other targeted populations relative to protestors and counter-protestors that may show up on campus Friday evening. In that regard, we have a security plan in place for the event and surrounding areas, and our priority will be to protect the public safety while also allowing people to exercise their constitutional rights to peaceful protest and assembly. I also want to remind our entire community that we have trustworthy, confidential resources here on campus to support your personal security and well-being. If anyone experiences direct harassment or threats to their personal safety, please contact CSUPD, Tell Someone, or the new bias reporting hotline so that we can respond effectively.

I believe in the humanity and justice of our community, and I believe that we cannot be diminished when we stand firmly in solidarity against hate, oppression, and those who view genocide as a viable political option. As much as our views and beliefs as members of the CSU community may differ on any number of topics, I am confident we are united on this front. Our Principles of Community are unwavering: There is no place for such hate at Colorado State.

Let’s take care of each other,