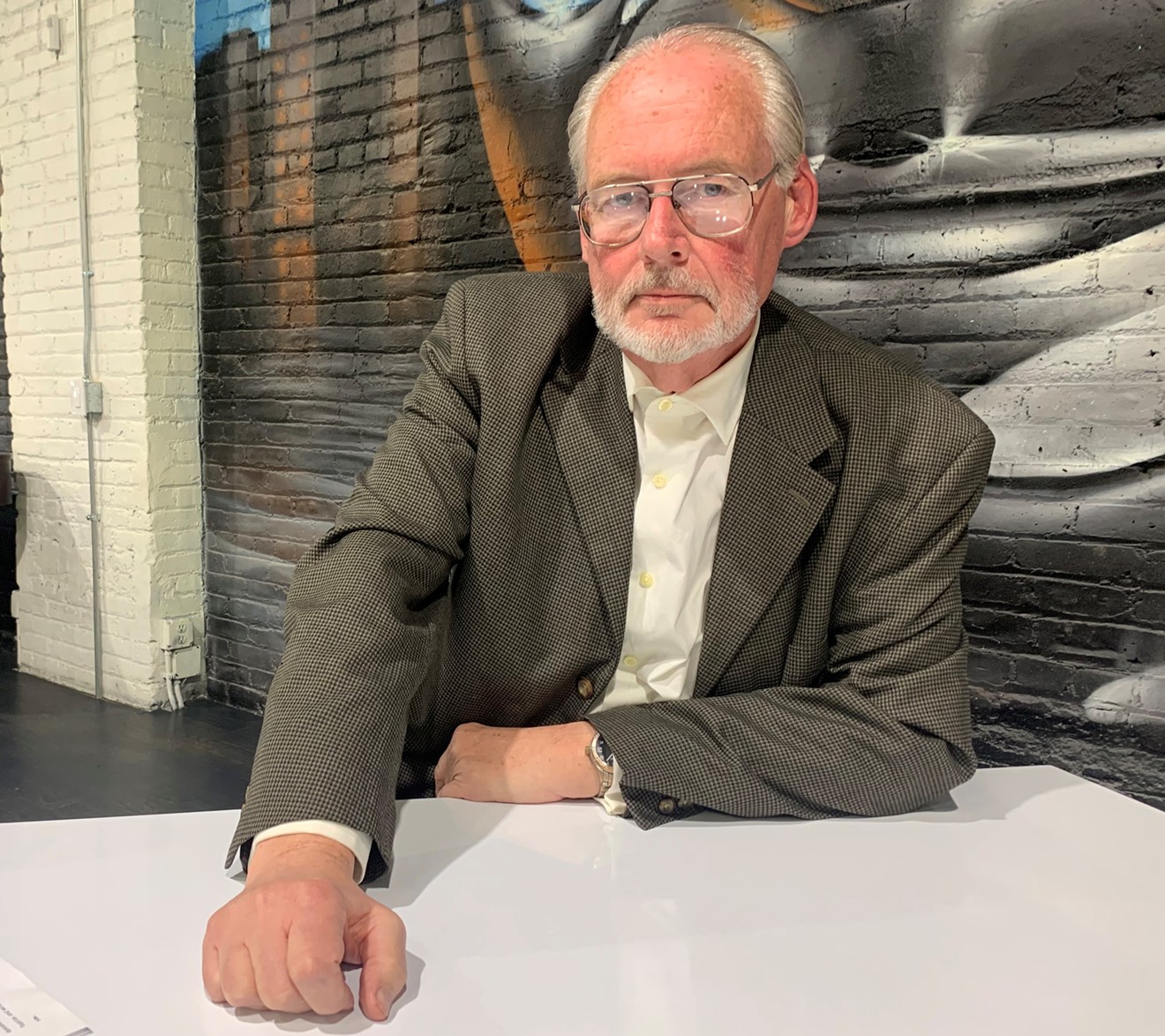 "It's time to break that up for the common good," says the 67-year-old Mason, who lives in Denver. "Nobody is renouncing anything, except formal organization and the use of violence."

Mason's announcement, which just hit the Internet via an audio recording, comes as federal law enforcement, Congress and the U.S. State Department ramp up the pressure on neo-Nazi groups that take up arms, such as Atomwaffen. Because of the timing, though, some critics believe that the move is designed to give members breathing room rather than actually end their militant activities.
In late February, federal law enforcement officers arrested five alleged Atomwaffen members, including the group's two co-leaders, for conspiring to call in fake threats against journalists and leave threatening materials at their homes.

Following those arrests, the pressure only increased. As Politico reported on March 9, the State Department is pushing to designate at least one violent white-supremacist group as a foreign terrorist organization — and Atomwaffen is the prime candidate for this designation. The group's membership numbers in the dozens; while most members reside in the U.S., there are also members scattered around the globe.

Congress is also considering a bill penned by Representative Max Rose, a Democrat from Staten Island, that would "direct the Department of Homeland Security to develop and disseminate a terrorist threat assessment of foreign violent white supremacist extremist groups," according to his office.

Mason, whose Capitol Hill apartment has become a pilgrimage site for young men who are seeking to join or are already part of Atomwaffen, says that he was approached by members of the group on March 9, the same day that Politico published its article, who said that they wanted him to announce the dissolution.

"I personally have been identified in the media as having been an 'advisor' to the group known as the Atomwaffen Division, and this decision on their part has my fullest agreement," Mason explains.

Atomwaffen seeks the violent overthrow of the U.S. government, according to members; several have been convicted of various weapons charges, including ones involving guns and explosives. In 2016, the year the group first gained the spotlight, Mason's writings from the 1980s, featured in a collection titled SIEGE, received newfound attention from young neo-Nazis.

"SIEGE blends equal parts of reverence for Hitler with an adoration of convicted murderer Charles Manson. And throughout the text, anti-Semitic and racist tropes, in addition to the need to maintain racial purity, are espoused," says Joanna Mendelson, a senior investigative researcher with the Anti-Defamation League's Center on Extremism.

"They are motivated by good hearts and devotion to their people," counters Mason. "They see a certain threat. They must take action. But they’re not that articulate, they’re not that mature, and they’re apt to go running off right straight into the arms of the federal government."

Some are already there. In 2017, Devon Arthurs allegedly shot and killed two fellow Atomwaffen members after they ridiculed him for converting to Islam.

That same year, seventeen-year-old Nicholas Giampa, who had links to Atomwaffen, allegedly shot and killed the parents of his girlfriend after they said she couldn't date him because of his neo-Nazi views.

Both Arthurs and Giampa are currently going through the court system.

"What a damn shame for that young man to have sacrificed his life for that," Mason says of Woodward, who visited him in Denver in late 2017. "That's a hate crime, no question about that, but is it terrorism?"

Mason has held neo-Nazi beliefs for decades, and they haven't diminished with time. The former member of the American Nazi Party says that he still believes that Jews are behind "society going insane and pulling apart." He also views the concept of diversity as something forced on the world by Communists, and feels disdain for the racial integration of public schools in this country.

As for the current president, "Trump has all the right enemies," Mason says. "The beating heart of America voted for him because he said something that made some kind of sense, like, 'We're going to build a wall along the Mexican border.'"

But Mason doesn't believe that his support of the president will prevent him from being arrested for his ties to Atomwaffen, even though he says he isn't involved in anything illegal: "Down the road, perhaps we might be scooped up Guantanamo-style or something like that."

And that's even if Atomwaffen is really disbanding, as Mason insists it is. "Officially, as an organization, no more," he says. "It’s not a dodge, and it’s not underground."

But he doesn't have everyone convinced.

"It comes as no surprise with the recent pressures exerted on this extreme and violent neo-Nazi group that they are issuing a public statement of dissolution," says Mendelson. "It’s the ultimate protective clause to say that this group will no longer exist, but it doesn’t take away their messaging. The dedication and commitment to the ideology remains."

Mendelson points to the Tree of Life synagogue shooting in Pittsburgh perpetrated by Robert Bowers in 2018 as evidence that neo-Nazi teachings can have influence outside of a formal organization. "It only takes that one lone actor who’s inspired by this ideology to wreak such devastation here in our country," she says.

Mason has been in the news intermittently over the past few decades. After pleading guilty to two misdemeanor counts of "illegal use of minor in nudity-oriented material," Mason left his home state of Ohio in the early ’90s and came to Colorado. In 1994, he was arrested in Las Animas and charged with two counts of sexual exploitation of a child and two counts of contributing to the delinquency of a minor. Mason ended up striking a plea deal with prosecutors that saw him plead guilty to a menacing charge, and received a three-year prison sentence. Westword reporter Alan Prendergast wrote about the case in 1995.

Aside from his brushes with the law, Mason generally stayed out of the news over the past few decades. But as young neo-Nazis rediscovered Mason's writings in recent years, various media outlets began reporting on his life and views. Pictures posted online show him posing in a Nazi uniform with young Atomwaffen members. There's also a recent photo of him with Atomwaffen members taken outside the home of Alan Berg, a Denver radio talk show host who was murdered by white supremacists in 1984.

Last November, 9News reporter Jeremy Jojola interviewed Mason on the streets of Denver; his piece highlighted the fact that Mason lives in government-subsidized housing and makes use of a soup kitchen.

Mason doesn't shy away from these facts, noting that many people his age use similar support programs."What the hell is your point?" he asks.
KEEP WESTWORD FREE... Since we started Westword, it has been defined as the free, independent voice of Denver, and we'd like to keep it that way. With local media under siege, it's more important than ever for us to rally support behind funding our local journalism. You can help by participating in our "I Support" program, allowing us to keep offering readers access to our incisive coverage of local news, food and culture with no paywalls.
Make a one-time donation today for as little as $1.