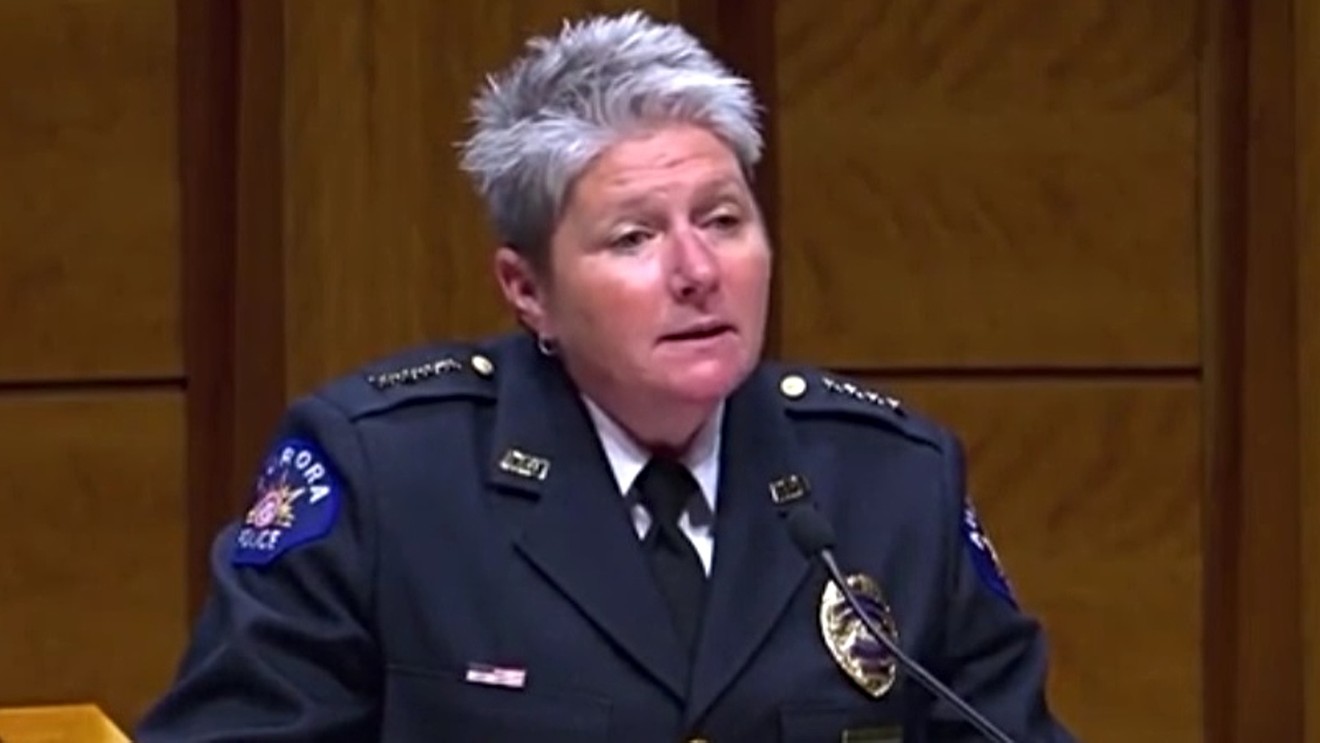 The firing of Aurora Police Chief Vanessa Wilson was teased weeks in advance. City of Aurora via YouTube
The Aurora Police Department has been in crisis for years, and it's currently operating under a consent decree issued by the Colorado Attorney General's Office, which determined in 2021 that the APD has exhibited a pattern of racial bias. Yet even many critics of the department gave high marks to Aurora Police Chief Vanessa Wilson — who took the job on an interim basis in December 2019 before being hired on "permanently" in August 2020 — for her efforts to address the department's issues with clear-eyed determination.

Nonetheless, Wilson was fired on April 6, with Aurora City Manager Jim Twombly contending during a press conference that she had to go because of alleged departmental mismanagement and sinking morale among members of the force. But Paula Greisen and Scott Medlock of Denver's King Greisen LLP, who represent Wilson, suggest a very different rationale.

The attorneys issued a statement contending that Wilson was pink-slipped "without cause after a concerted campaign by Council woman Danielle Jurinsky and other conservative city council members to smear Chief Wilson’s reputation and credibility."

Jurinsky has not responded to Westword's request for a comment about this claim. But plenty of other prominent individuals are decrying Wilson's dismissal, including U.S. Representative Jason Crow, who released a statement contending that the decision was a "setback" for reform efforts, and Sheneen McClain, whose son, 23-year-old Elijah McClain, died in August 2019 after a brutal encounter with Aurora police officers. Sheneen McClain, who was among the plaintiffs in a lawsuit over Elijah's death that was settled for $15 million in November 2021, told 9News that Wilson's firing showed that Aurora isn't serious about fixing its problems.

According to Colorado Attorney General's Office spokesperson Lawrence Pacheco, Aurora officials didn't violate the consent decree by giving Wilson her walking papers; the agreement "establishes clear deadlines and areas of improvement but leaves personnel decisions to the city," he notes. AG Phil Weiser issued a statement praising Wilson while steering clear of castigating Twombly and company for sending her packing. "Aurora Police Chief Vanessa Wilson served Aurora well for many years and I thank her for her service to the community," he said. "The consent decree requiring improvement of policing and building trust in law enforcement in Aurora is with the City of Aurora, not any one person or agency. The attorney general’s office will continue this important work with Aurora leadership and the next Aurora police chief."

Wilson's firing shares similarities with the Douglas County Board of Education's sacking of superintendent Corey Wise in February. Both moves leaked in advance; boardmembers who supported Wise revealed that in late January he was given the choice of either resigning or getting canned, while Denver7 reported on March 24 that Wilson was planning to quit in the coming weeks — an assertion she publicly denied. Likewise, both ousters were characterized as being without cause, and Wise and Wilson have both lawyered up; wrongful-termination lawsuits could be forthcoming.

For its part, Aurora appeared to be laying the groundwork for Wilson's ouster with the release earlier this week of an independent report from PRI Management Group; the document cites "an issue of significant concern regarding backlogged police records," with more than 2,500 of them clogging the system as of March 11.

Wilson wasn't afraid of making powerful enemies. Last November, for example, she put Officer Doug Wilkinson, the head of the Aurora Police Association, on administrative leave after he wrote and distributed a letter that mocked the consent decree and portrayed Aurora as being filled with criminals, scumbags and people who apparently aren't American enough for him. In February, Wilkinson was fired.

The next Aurora police chief will have a tough act to follow.

Continue to see a video of Aurora's announcement about Wilson's firing, followed by the complete statement from her attorneys, Paula Greisen and Scott Medlock, which includes remarks from Wilson.
Paula Greisen statement on behalf of Vanessa Wilson, April 6:


This morning the City of Aurora fired Chief of Police Vanessa Wilson without cause after a concerted campaign by Council woman Danielle Jurinsky and other conservative city council members to smear Chief Wilson’s reputation and credibility. Since assuming their positions, these council members have made it clear that they did not support Chief Wilson’s efforts to implement the Court order to reform the police department and eradicate the systemic racism found by the Colorado Attorney General in the wake of the death of Elijah McClain.

In an effort to justify getting rid of Chief Wilson, the City and Council have engaged in a conspiracy to leak misinformation to the media and falsely attribute responsibility for the department’s long-standing historical problems to Chief Wilson. In reality, Chief Wilson made numerous attempts to have good faith discussions with the City leadership about these issues and repeatedly sought the resources necessary to resolve them from the City Council. City leadership refused these efforts, preferring instead to smear the reputation of a dedicated police officer who has served the Aurora Police Department for over two decades, and courageously agreed to take
the helm in one of the City’s most difficult times to bring needed reforms. The citizens of Aurora have the right to demand accountability from the City Manager and City Council who orchestrated this farce.

"I’m thankful for the opportunity to serve the people of Aurora. I am proud of its police officers and what we’ve accomplished together,” said Chief Wilson. "I look forward to continue working in law enforcement to ensure transparency, reform, and accountability. We must all remain dedicated to practices that ensure the safety and well-being of our communities and the fair treatment of all citizens. During my time as Chief, my focus has been to bring about the reforms required by the consent decree and restore trust in our community. I am proud of the progress this department has made during the myriad of challenges that we have faced. I hope that the Aurora community understands that the amazing women and men of the Aurora police department care about them and will continue to protect and serve regardless of who leads this agency. I am proud to have been their Chief."


Click to read the PRI project update.
KEEP WESTWORD FREE... Since we started Westword, it has been defined as the free, independent voice of Denver, and we'd like to keep it that way. With local media under siege, it's more important than ever for us to rally support behind funding our local journalism. You can help by participating in our "I Support" program, allowing us to keep offering readers access to our incisive coverage of local news, food and culture with no paywalls.
Make a one-time donation today for as little as $1.