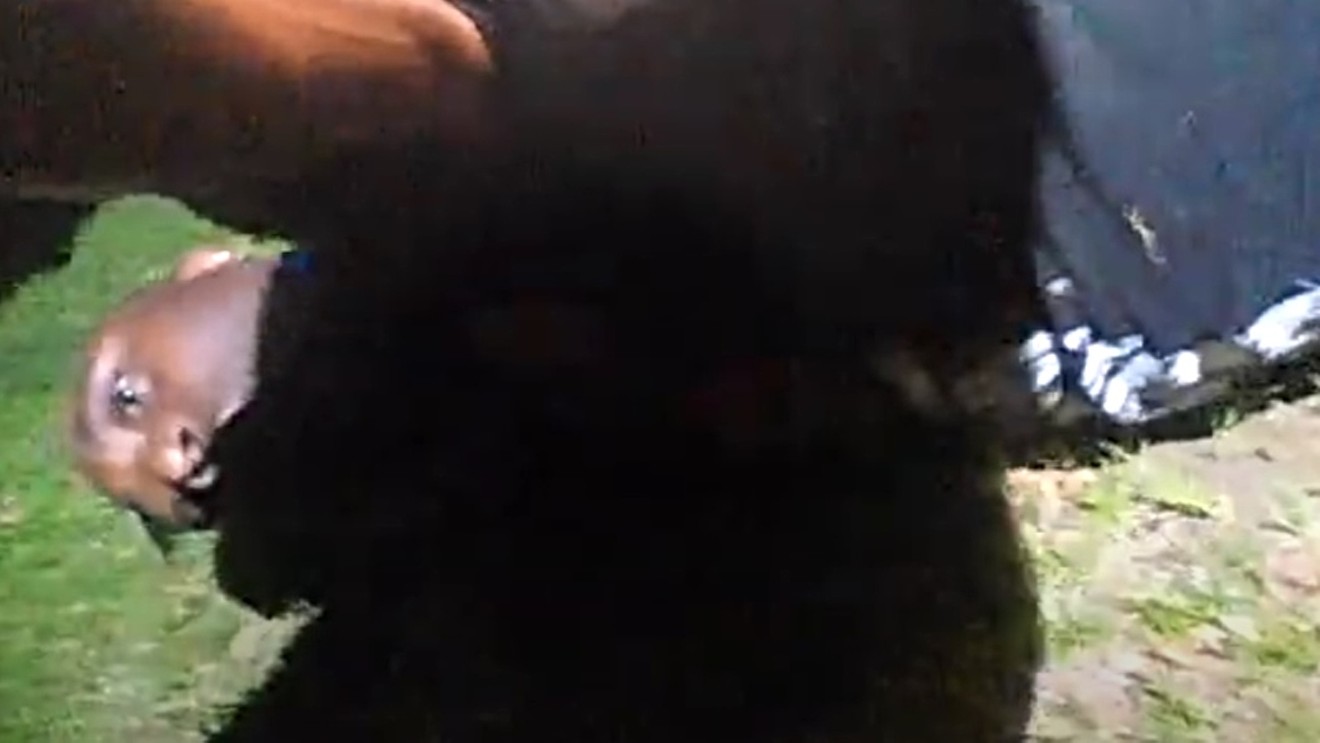 A screen capture from body-camera footage of Charles Ward, who is suing the City of Aurora and two police officers after being shot in the groin during a May 2020 incident. Aurora Police Department via Kishinevsky & Raykin
Last year, Aurora Police Department officer Randy Roedema was indicted on five criminal counts, including second-degree assault and manslaughter, over a brutal police interaction that led to the death of 23-year-old Elijah McClain in August 2019. Now Roedema is named in a lawsuit filed by another Black man, Charles Ward, who was shot in the groin with a rubber bullet during a 2020 call.

Ward suffered a ruptured testicle during the incident, which was captured by body-worn cameras affixed to Roedema and another Aurora police officer, Andrew Brown, outside his own Aurora residence in the 1600 block of South Espana Way. "He was calm and complied with all of their orders," says attorney Igor Raykin of the Aurora-based law firm Kishinevsky & Raykin, who represents Ward. "They shot him anyway."

The complaint was filed in March, but only recently came to light. Defendants include Roedema, Brown and the City of Aurora. "We do not have a comment on this active litigation," says Ryan Luby, an Aurora spokesperson.

The incident took place on May 25, 2020. Here's how Raykin summarizes what happened:

"Charles is a working electrician who simply wanted to go home after a long day at work," he says. "His wife changed the locks on his house, so he couldn't get in. She didn't have a restraining order against him, and his name was on the lease. He had every right to go home."

Ward's wife was inside at the time with a number of their children, but a daughter was with Ward, and according to the lawsuit, "at the very least, [he] needed to gather supplies to take care of her for the night." However, Raykin continues, "he couldn't get in through regular means, so he tried to use one of his tools" — specifically, an electric saw called a Sawzall.

Ward's wife responded by calling the Aurora Police Department, which dispatched Roedema and Brown. Upon encountering Ward, Brown ordered him to "get on the fucking ground now" and to drop the Sawzall; Roedema echoed these commands. According to the lawsuit, Ward responded by letting go of the tool and his cell phone before standing to adjust his shorts, which had slid down — at which point Roedema pulled the trigger.

Roedema shot Ward "within less than ninety seconds of showing up and after communicating with Charles for less than twenty seconds," Raykin notes.

Here's the action captured by Brown's body-worn camera:
And this is a clip from Roedema's point of view:
Shortly after being taken into custody, Ward was transported to an area hospital, where he was diagnosed with "a rupture to his right testicle and a large scrotal hematoma surrounding it," the lawsuit states. "Mr. Ward was urgently sent to surgery for a partial orchiectomy and to remove the tissue that was no longer receiving blood flow."

Five counts were initially pressed against Ward, including criminal attempt to commit second-degree burglary, possession of burglary tools, child abuse, criminal mischief and harassment. But a court later dismissed all of the charges.

In one section, the lawsuit goes beyond describing what happened to Ward, discussing the Aurora Police Department's pattern and practice of bias against Black suspects — the focus of a consent decree issued by Colorado Attorney General Phil Weiser in 2021.

"This department has a serious issue with the way that it interacts with the community, particularly the Black community," Raykin contends. "Its history has shown this over and over again."

He adds: "We tried to work this out with the City of Aurora before filing suit; we were ignored. They thought Charles was going to go away, but he's seeking justice."

Click to read Charles Ward v. City of Aurora, et al.
KEEP WESTWORD FREE... Since we started Westword, it has been defined as the free, independent voice of Denver, and we'd like to keep it that way. With local media under siege, it's more important than ever for us to rally support behind funding our local journalism. You can help by participating in our "I Support" program, allowing us to keep offering readers access to our incisive coverage of local news, food and culture with no paywalls.
Make a one-time donation today for as little as $1.