Representative Lauren Boebert never stops thinking about her most important constituent: Lauren Boebert. YouTube
Very occasionally, the batshit-crazy world of Lauren Boebert takes a breath and seems almost rational. It's a nice break in the day — or in this case, a turbulent two-year term.

On July 23, Boebert gave her "own the libs" rhetoric a rest for a bipartisan roundtable meeting with Interior Secretary Deb Haaland, joining Governor Jared Polis, Congressman Joe Neguse and senators Michael Bennet and John Hickenlooper to advocate for keeping the Bureau of Land Management office in Grand Junction, where it was moved under President Donald Trump and former Interior Secretary David Bernhardt, a Western Slope native.

Not that the bipartisan spirit lasted long. Boebert's subsequent announcement put things in a more familiar attack-mode perspective: "While some have tried to politicize the Bureau’s move to Grand Junction because they detest anything associated with the previous administration, the facts are clear: moving the headquarters to this great community has always had broad bipartisan and bicameral support.”

But that's status quo for the CD3 rep. Earlier in the week, Boebert complained about the unequal treatment of — get this — those rioters who have been arrested and charged for taking part in the January 6 insurrection at the Capitol, reminding constituents of the “solemn obligation” of the U.S. criminal system...that “all defendants are treated equally before the law.”

In doing so, she was comparing the insurrectionists with the social-justice Black Live Matters (the other BLM) protesters of last year, as though speaking out in favor of basic equal treatment under the law is the same as beating law enforcement officers with the American flag, urinating in the Halls of Congress, and generally defacing every symbol of America they could find.

Boebert’s actual reverence for the “solemn obligations” of holding public office is nonexistent. 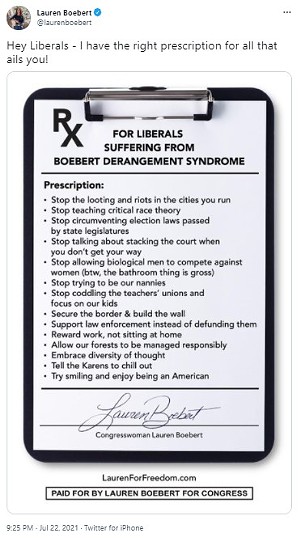 Twitter
Case in point: one of her five tweets from July 22, which operates as a grocery list of statements meant to “own the libs” and not much else. Some of them make absolutely no sense. Some of them implement the Trumpian strategy of accusing your political opponent of exactly the same crimes of which you’re guilty. Most are misguided platitudes or empty rhetoric, and all are meant only to provoke. Even the title, referring to “Boebert Derangement Syndrome,” is a rip-off of her hero. Trump Derangement Syndrome (TDS) is one of those internet insults that the far-right loves to throw around, like “soy-boys” or “betas” or “cucks” or “SJW.” It’s playground-level politics, rudeness seen as power. But rudeness, as the aphorism goes, is the weak person’s idea of strength. (And oblivious Karens using the term "Karen" carelessly might be the most Karen-y thing there is.)

Being a Trumpian Republican in 2021 is a lot like terrible art: It succeeds, if it can be said to succeed at all, only in prodding and poking and irritating up an emotional response. It doesn’t create or inspire a thing. It will not last or be well remembered. But in the moment, it can make a splash.

And so America — and Colorado's 3rd Congressional District, specifically — needs to tread water and endure the Boebert splashing until the 2022 elections, when we might be able to towel off. In the meantime, yes, equal justice under the law is an important tenet of the American judicial system, and, yes, circumstances of said justice will always ameliorate the scope of that justice.

One more thing to consider about “solemn obligation” and Lauren Boebert. Section 3 of the 14th amendment —you know, the one that talks about equal protection under the law? — states that no elected official "shall have engaged in insurrection or rebellion against" the U.S. Constitution. America can have a rational discussion about whether or not a vote against the confirmation of legally valid electoral college results for the rightful president-elect constitutes a breach of Section 3. But as Boebert so pithily posted support of that violent uprising at our nation’s Capitol several hours before it took place: “Today is 1776.”

Figuring out what that tweet means in terms of Boebert's complicity in an unsuccessful act of insurrection on the United States government? That should be a solemn obligation.
KEEP WESTWORD FREE... Since we started Westword, it has been defined as the free, independent voice of Denver, and we'd like to keep it that way. With local media under siege, it's more important than ever for us to rally support behind funding our local journalism. You can help by participating in our "I Support" program, allowing us to keep offering readers access to our incisive coverage of local news, food and culture with no paywalls.
Make a one-time donation today for as little as $1.