How Naked Jail Abuse Settlement Went From $20K to $2.4M 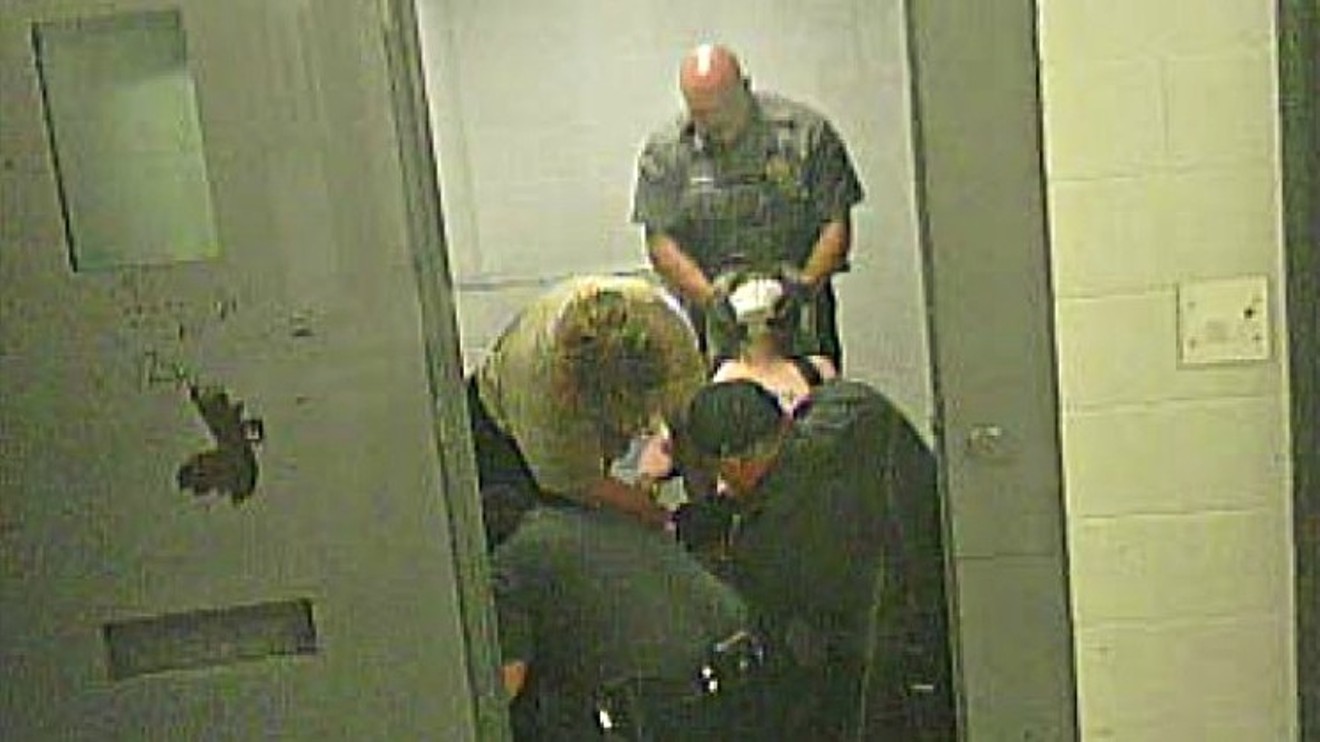 In this screen capture from a video, a Fremont County deputy can be seen putting a restraint hold on a naked Carolyn O'Neal, her face covered with a spit mask, as other personnel try to force her foot back into a strap on a restraint chair. Killmer, Lane & Newman, LLP
After years of legal wrangling and negotiations, Fremont County has agreed to pay millions to settle a lawsuit filed by Carolyn O'Neal over what her legal team, led by Denver-based attorney David Lane, characterized as an illegal 2014 arrest and horrific mistreatment while she was detained in custody, including leaving her strapped naked to a restraint chair for hours — actions that were captured on video.

The deal has received relatively modest attention because it was announced on December 20, the Sunday before Christmas, and even today, Fremont County is disputing the amount it paid to make the matter finally go away. In a statement provided to Westword, county officials say the total was $2 million, of which all but $505,000 was covered by insurance, while Lane puts the overall sum at $2.4 million.

The spin suggests that the county got a relative bargain, especially considering that the jury in a trial that concluded in April 2019 wanted to give O'Neal $3 million, plus another $500,000 to cover attorney's fees. But Lane offers a different perspective. "Their last offer before trial was $20,000," he reveals. "I said, 'You guys are delusional. This is a seven-figure verdict after trial.' But they didn't believe me."

O'Neal, who's in her mid-fifties and has three children and three grandchildren, "had a hideously abused life," Lane told us last year. "She was homeless at age twelve and repeatedly, sporadically homeless for much of her life. She also had an alcohol and drug problem and was terribly abused by men."

O'Neal eventually put down roots in Cañon City, the Fremont County community where one of her daughters and a grandson live — and in October 2013, she began to get support for her various addictions after checking in to New Creations Inn, a sober-living facility. But the next year, she received pushback after trying to withdraw from the program in order to help her mother, who lived in Grand Junction and had just been diagnosed with cancer.

Shortly thereafter, when another resident in the program asked how she was doing, Lane said she told him, "I'm doing so great, I'll probably drive my car off a cliff." This remark was interpreted not as an offhand expression of frustration, but a suicide threat by program representatives, who called the Fremont County Sheriff's Department.

At approximately 12:28 p.m. on May 5, 2014, FCSD deputies arrived at O'Neal's residence "just as she was ready to take a bath," Lane revealed. "They said, 'You made a suicidal threat. We need to make sure you're okay.' And she said, 'I didn't make a suicidal threat.' But they used a key and walked in, and she was completely naked. She said, 'Get the fuck out of here!' She wanted them gone, and her PTSD triggered madly, which you can understand, since three armed men just broke into her home."

The deputies responded "by saying, 'We're arresting you for disorderly conduct,'" Lane continued. "They threw her naked on the bed and then threw a blanket over her. But the blanket kept falling away as they took her to the police car while she was screaming and cursing at them. She said, 'You can't do this to me! I'm in my own home!' And that's basically what a judge said to them three months later, when the charges were dismissed. Disorderly conduct has to happen in a public place, and she was in her own home."

Nonetheless, O'Neal was driven to the Fremont County Sheriff's Office, and when officers moved her out of the vehicle, "she was completely naked, and she had a 250-pound deputy on one arm and another big deputy on the other," Lane recapped. "Now, Carolyn O'Neal is only 5'4" and 123 pounds — but they said she tried to throw an elbow at the 250-pound deputy. So they threw her on the ground, even though she was only about twenty feet from a cell, and they made no effort to cover her up."

Then the deputies "brought out a restraint chair," Lane recounted. "They picked her up, put her in the chair naked, put a spit mask over her face and wheeled her into a cell. But they left the door open and started taking video of this while she was in the chair. And she was in it for four hours."

A smock was initially placed over O'Neal, but "it kept falling away," Lane pointed out. "So about half an hour into the time she was in the restraint chair, she managed to wiggle one of her ankles out of the ankle restraints so she could cross her legs — because she saw an inmate across the way jerking off because she was semi-naked."

This pose didn't suit a deputy who walked by a short time later. In Lane's words: "They geared up a team to force her legs apart and put her back in the restraint, because she was apparently the reincarnation of Bruce Lee and could kill somebody with her scrawny, spindly legs — except there's no one to kill, since she was alone in her cell. They forced her right foot into the restraint and strapped her in, but she was up on the ball of her other foot. So to get her to put it down, they put a pressure hold on her to get her to comply."

She tried not to do so. Lane acknowledged that O'Neal "yelled at them, trying to preserve her right to protect her own body. So they tased her while she was in the restraint chair — and that's when her foot went down."

Here's an excerpt from the video:

After four hours, O'Neal was finally moved from the chair to a cell, where she lingered, still naked, for another eight hours.

The lawsuit was filed in May 2016 and spent nearly three years winding its way through the system. At trial, Lane stressed that Fremont County officials vigorously defended their actions: "When the former sheriff testified, he said, 'If this happened a hundred times, I'd tell them to do it the same way a hundred more times.'"

The jury wasn't mollified. On April 10, they authorized an award of $2,995,004, including $1 million for unconstitutional policies in Fremont County, not counting legal fees.

The judge in the case subsequently reduced the payout to $1.7 million in damages and approximately $400,000 in fees and costs, Lane estimates. That prompted an appeal in the 10th Circuit by both sides, albeit for very different reasons, and after well over a year, Lane says, "we compromised. The compromise was halfway in between what we thought we could have gotten from the 10th Circuit and what they thought they would escape with."

According to Lane, O'Neal is happy with the resolution, even though "no deputy sheriffs were disciplined as a result of any of this, since the sheriff said all of it was done by the book, and they made no apologies."

Indeed, the statement provided by the county is completely free of regrets about what was done to O'Neal. But an expression of sympathy is directed toward employees in the following passage: "The Board of County Commissioners believes it is in the best interests of the County to fully resolve this case and move forward, which will also remove any financial impediments from Sheriff’s deputies’ lives. The County Commissioners support the dedicated law enforcement professionals working under the authority of the Fremont County Sheriff and thank them for their service to the County."

Lane says he's appalled by this stance, "which should inspire the taxpayers of Fremont County to oust the entire corrupt bunch of them. ... This county is filled with imbeciles, so whether any lessons were learned is unclear."

He thinks the price tag for what happened to O'Neal would be even higher today. "The jury returned a verdict of $3 million pre-George Floyd," he says. "I think post-George Floyd, juries are going to be much more likely to return similar verdicts."

Click to read Carolyn O'Neal v. Fremont County Board of Commissioners et al. and the 2019 Carolyn O'Neal verdict form.
KEEP WESTWORD FREE... Since we started Westword, it has been defined as the free, independent voice of Denver, and we'd like to keep it that way. With local media under siege, it's more important than ever for us to rally support behind funding our local journalism. You can help by participating in our "I Support" program, allowing us to keep offering readers access to our incisive coverage of local news, food and culture with no paywalls.
Make a one-time donation today for as little as $1.