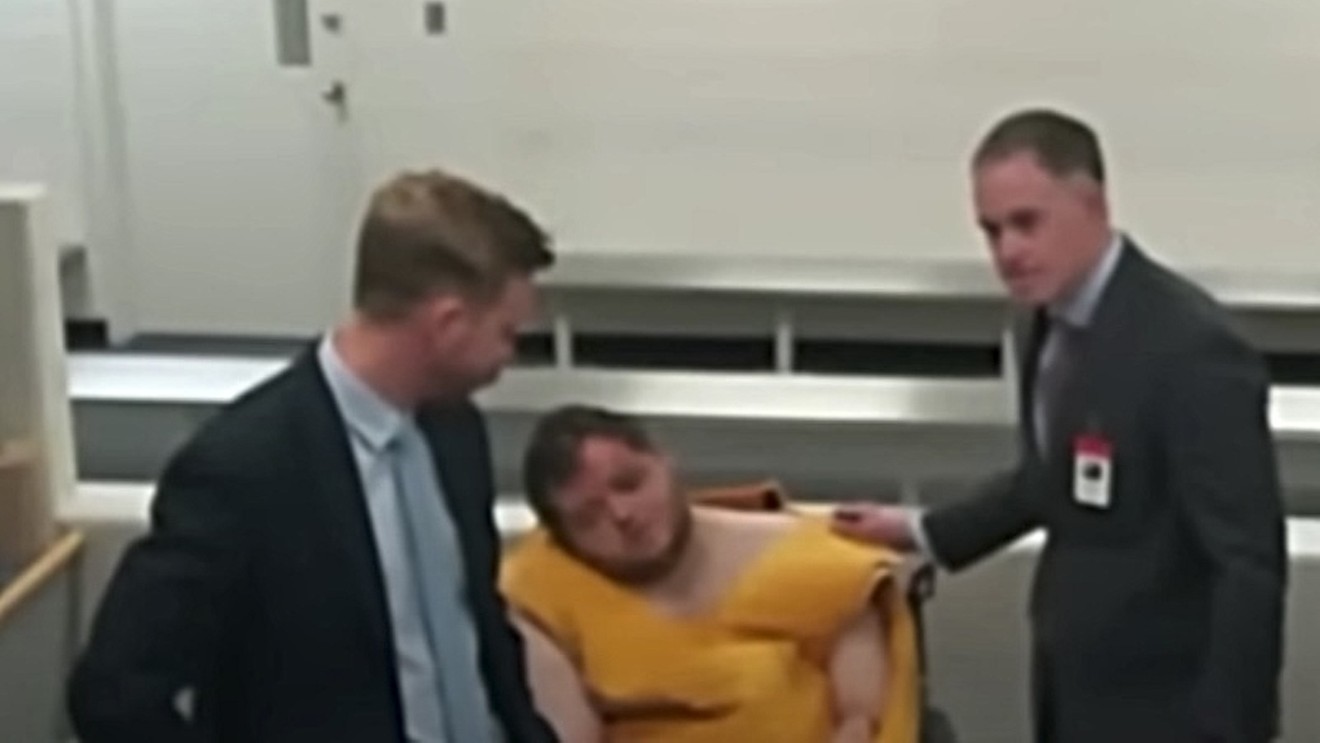 The Club Q shooting suspect seemed barely conscious during a court appearance. YouTube
Late on December 7, in response to a judge's order, the arrest affidavit for the alleged shooter in the November 19 attack on Club Q in Colorado Springs, which killed five people and wounded at least nineteen others, was unsealed. Among the revelations:After the rampage, which ended thanks to the heroism of patrons Thomas James and Richard Fierro, suspect Anderson Lee Aldrich apologized and commented about having been awake for four days.

On December 6, the suspect was formally accused of 305 charges related to the attack on the venue, an important setting for the local LGBTQ+ community, with four documents that outline the specifics unveiled in the hours before the affidavit was made public. The combined releases fill 106 pages with legal details about multiple murder, attempted murder and crime-of-violence offenses. Also included are dozens of bias-motivated-crime allegations despite speculation that such charges would be complicated by the suspect's nonbinary status and use of they/them pronouns.

There's another document that's still being kept under wraps — an affidavit about the suspect's 2021 arrest over a bomb threat. A court hearing is scheduled for later today over requests to unseal that item, too, but the Associated Press has already reported about its contents, which are said to include a comment from Aldrich about becoming "the next mass shooter."

The Club Q affidavit was clearly written quickly. Several of the sentences in the six-page narrative are awkward or incomplete, and other references speak to the initial stages of the investigation. An example: "The quality of the video surveillance is relatively poor; however, Matthew [Haynes, the business's co-owner] stated there is a DVR system inside Club Q and the quality of the video on the DVR is much better than was shown to me on the phone."

Rather than detracting from the emotional impact of the account, however, the rushed nature of the draft actually enhances it.

At about 11:56 p.m. on November 19, the affidavit notes that the communications center for the Colorado Springs Police Department received "a report of a shooting/active shooter situation" at Club Q, 3430 North Academy Boulevard. A caller said that at least a dozen shots had been fired and the suspect was last observed running toward an outside patio behind the building.

Images included in the affidavit include a screen capture of the shooter exiting a 2005 gold Honda in the parking lot of Club Q... 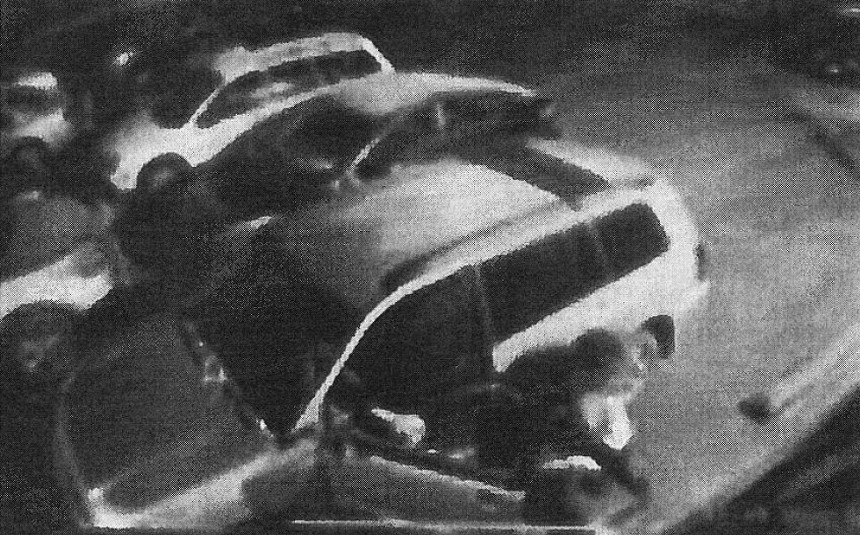 A surveillance image showing the Club Q shooter exiting a 2005 gold Honda on November 19.
Colorado Springs Police Department
...and opening fire at the entrance of the club. 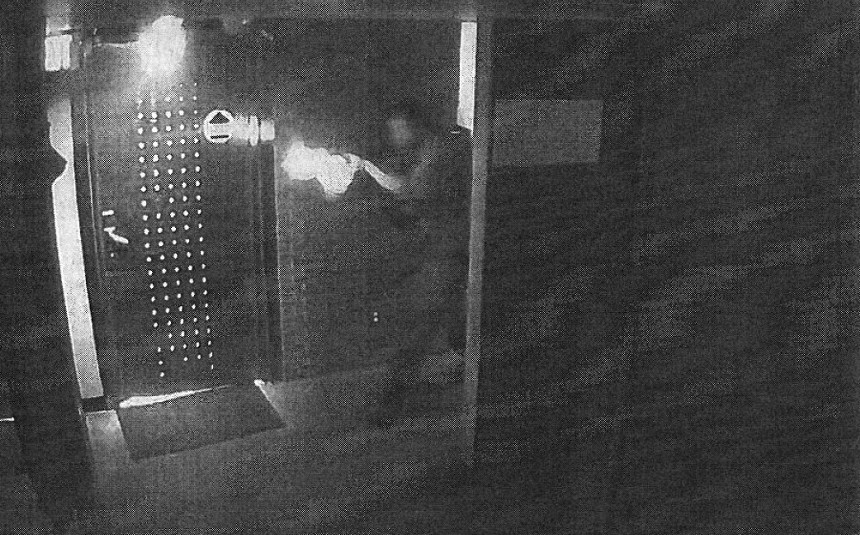 A screen capture showing the shooter opening fire at the entrance of Club Q on November 19.
Colorado Springs Police Department
Initially, the suspect was described as "a white male, who was wearing a black baseball cap, a black shirt over a black T-shirt and blue jeans." But another call specified that the shooter had been clad in a ballistic vest and packed an "AR-15-style assault rifle" but was then "detained and was being beat up on the dance floor."

After arriving at the club, the affidavit's author saw "numerous victims both inside and outside of the club," as well as "a tremendous amount of blood, medical intervention debris and clothing items scattered directly outside of the club." Meanwhile, the shooter "was transported to a local hospital to have injuries treated." Initially, officers believed the suspect may have "sustained a gunshot wound to the head," but that was inaccurate; the injuries were a result of the pummeling described in detail by Fierro, who said he'd been at Club Q with his family and friends to watch a friend of his daughter's perform when they heard gunshots near the front door of the club.

As the suspect was being taken away, two officers "overheard Anderson tell medical staff he was sorry and he had been awake for four days."

In a subsequent interview, Laura Voepel, the accused shooter's mother and housemate, told detectives that she and her son were going to go to a movie at 10 p.m. on November 19, "but Anderson left on an errand he told her would only take 15 minutes. She said he did not provide her any other information," and insisted that the only weapon she knew the shooter possessed was a folding pocket knife.

Unfortunately, that didn't prove to be the case. Click to read the Club Q suspect's affidavit and part one, part two, part three and part four of the charging documents.
KEEP WESTWORD FREE... Since we started Westword, it has been defined as the free, independent voice of Denver, and we'd like to keep it that way. With local media under siege, it's more important than ever for us to rally support behind funding our local journalism. You can help by participating in our "I Support" program, allowing us to keep offering readers access to our incisive coverage of local news, food and culture with no paywalls.
Make a one-time donation today for as little as $1.