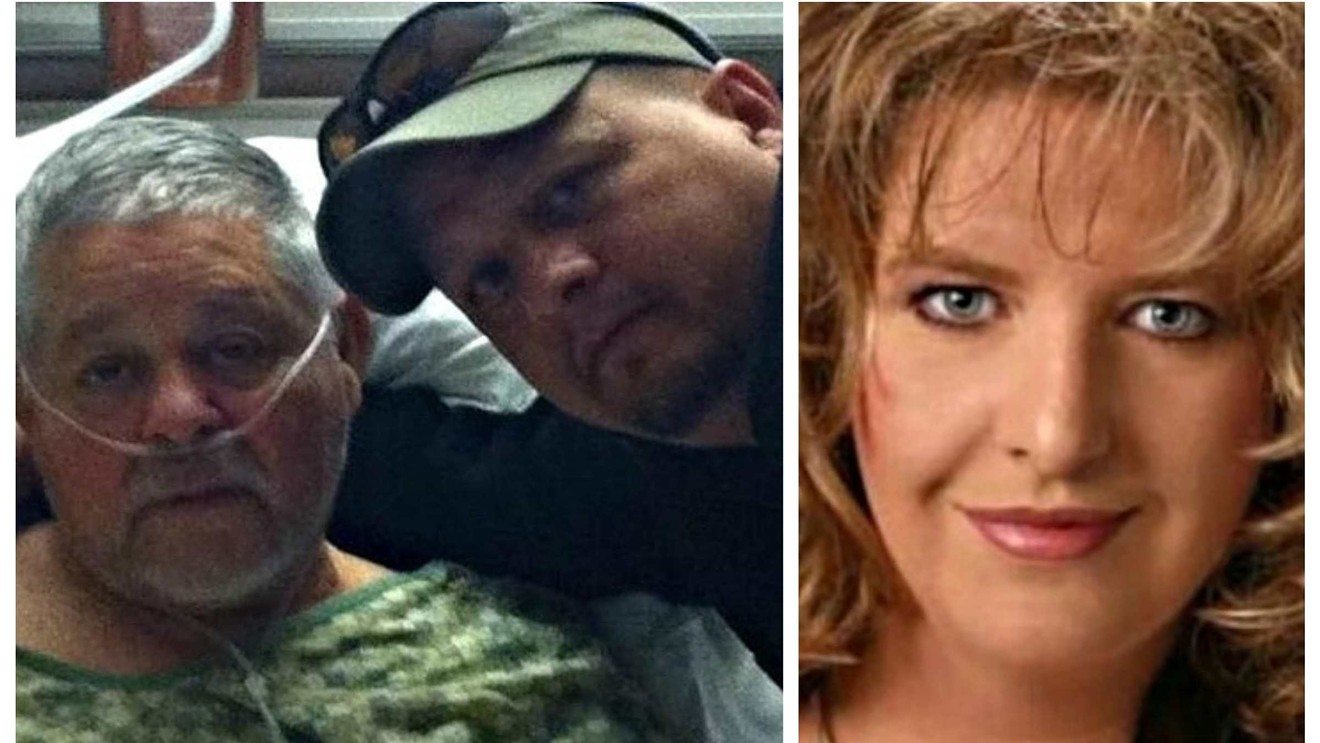 Bobby Espinoza with his father, Jerry, during the latter's final hospitalization, and Sunset Mesa operator Megan Hess. Courtesy of Bobby Espinoza/metro.co.uk
More than two years after the FBI raided Sunset Mesa, a Montrose funeral home that allegedly had a side hustle involving the sale of corpses' body parts without the knowledge of their relatives, 43-year-old Megan Hess and her 66-year-old mother, Shirley Koch, who operated the facility, have been indicted by a grand jury.

According to the office of U.S. Attorney Jason Dunn, the pair have both been charged with six counts of mail fraud and three illegal-transportation-of-hazardous-materials beefs. Each of the former carries a possible maximum penalty of twenty years in prison, while the latter could result in five years plus a $250,000 fine per count.

The actions of Hess and Koch have already spawned multiple lawsuits, including one filed by lawyer Chris Cowan of Downs, McDonough & Cowan, LLC, a firm based in Durango, on behalf of clients such as Terri Thorsby, who was stunned when investigators revealed that her late mother, Mildred Carl, had been dismembered and the separate parts sold: Carl's head was shipped to one business, her arms, feet, knees and pelvis to another.

"The families of my clients want to thank the grand jury and U.S. Attorney’s Office for their dedication pursuing justice for this awful criminal behavior," Cowan notes via email. "I know all the families will follow the prosecution of these allegations against Ms. Hess and Mrs. Koch."

Echoing these thoughts is Michael Burg of Denver's Burg Simpson, who's handling two civil cases on behalf of more than seventy plaintiffs, including Bobby Espinoza, who told us in 2018 about the trauma that he and other relatives suffered after learning that the body of his late father, Jerry Espinoza Sr., who'd been assigned to Sunset Mesa for care, had also been dismembered and sold for parts; Jerry's head and legs were carved from his body and his torso and pelvis severed prior to their distribution to three different purchasers.

"We're really happy and want to thank the grand jury and the FBI for the indictments," Burg says. "Only when people stand up and shine a bright light into the shadows is this kind of wrongdoing exposed. It's been a long time coming."

True enough. The aforementioned raid took place in February 2018, and ever since, a steady stream of horror stories have flowed from Sunset Mesa, including tales of relatives being given powdered cement that was passed off as cremains.

Such cases aren't unique: Westword obtained a human body parts price list from Biological Resource Center Inc., a now-defunct Arizona business that charged $200 for an elbow, $400 for a whole arm and shoulder, $3,300 for a torso with attached head (referred to as a "cephalus") and $5,000 for an intact corpse. Burg Simpson eventually won a lawsuit against BRC for more than $58 million — and Michael Burg contends that what took place at Sunset Mesa was even worse.

The Sunset Mesa funeral home in the aftermath of the FBI raid.
CBS4 via YouTube
Cowan is uncertain that the Sunset Mesa case will lead to a similar reward. "We are likely to see a serious measure of justice handed to Ms. Hess and Mrs. Koch," he writes. "My law firm and I will continue to pursue civil remedies in the Montrose state courts. However, we are afraid significant monetary recoveries are doubtful."

In the meantime, the Colorado General Assembly has attempted to prevent a recurrence of such abuses, blessing a 2018 law prohibiting funeral homes and body brokerages being run out of the same location. And during the 2020 session, Representative Matt Soper introduced House Bill 20-1148, also known as the Human Remains Disposition Sale Businesses Act, which would make Hess's practices a Class 6 felony. The proposal has passed both chambers of the Colorado Legislature and is currently awaiting the signature of Governor Jared Polis, who is currently focusing his energies on the COVID-19 outbreak.

The indictments don't have any direct impact on the civil cases against Sunset Mesa, which are moving forward on a separate track. "We're fighting for our clients, who are grieving not only about the loss of their loved ones, but also because of the horrible things that were done by Megan Hess and her mother at Sunset Mesa. We're not going to rest until we find out about what happened to each and every one of them, and we also will continue to investigate the people and businesses who bought from Sunset Mesa, and who knew or should have known that the bodies weren't taken with informed consent."

In civil court, plaintiffs are held to a preponderance-of-the-evidence standard, as opposed to the criminal court requirement for proof beyond a reasonable doubt. Burg is confident that he'll be able to meet it for all the operations involved, since "our clients gave approval for the bodies to be cremated, but not for them to be cut up and sold."

From the conversations he's had with family members, the indictments "will give them some comfort. Many of our clients have been inquiring if and when there was going to be an indictment, and we've been telling them that the FBI was doing a full and complete investigation and the grand jury was meeting to determine what and how many charges could be brought. But it certainly doesn't take away the pain and guilt these people suffer knowing what happened to their loved ones' bodies, and we will continue to pursue the civil cases against these and other defendants until they're brought to justice."

Click to read the Sunset Mesa indictment.
KEEP WESTWORD FREE... Since we started Westword, it has been defined as the free, independent voice of Denver, and we'd like to keep it that way. With local media under siege, it's more important than ever for us to rally support behind funding our local journalism. You can help by participating in our "I Support" program, allowing us to keep offering readers access to our incisive coverage of local news, food and culture with no paywalls.
Make a one-time donation today for as little as $1.