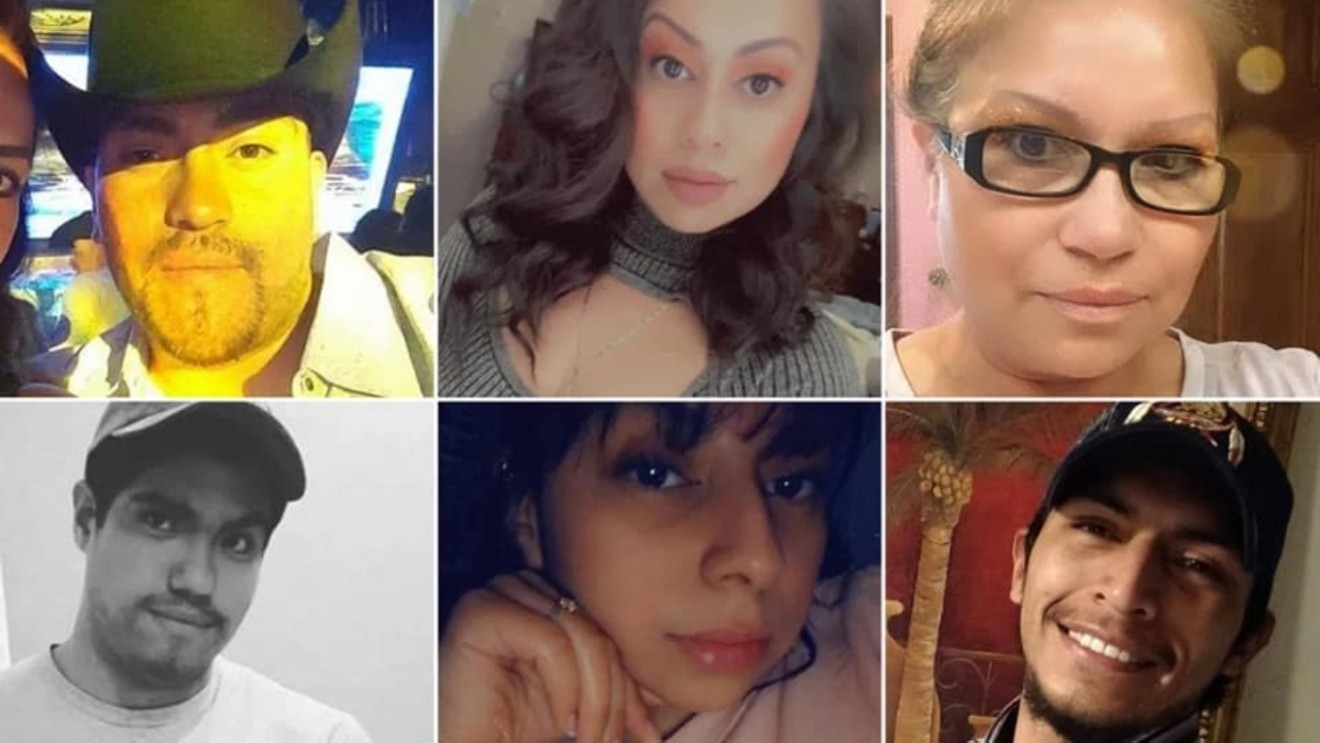 Melvin Perez (clockwise from upper left), Mayra Ibarra de Perez, Joana Cruz, Jose Ibarra, Sandra Ibarra-Perez and Jose Gutierrez were killed during a May 10, 2021 mass shooting in Colorado Springs. Family photos
The November 19 shooting at Club Q in which five people were killed and nineteen were hurt is among the worst gun attacks ever recorded in Colorado Springs, with more victims than even the November 2015 assault on a Planned Parenthood office in the city that resulted in three deaths and nine injuries. During the six years since then, however, Colorado Springs has been the setting for nine additional mass shootings, including four earlier this year.

This information is culled from the Gun Violence Archive, which tracks violent episodes involving firearms across the country, including Colorado. GVA identifies a mass shooting as an incident in which at least four people are injured or killed; like another major compiler, Mass Shooting Tracker, it places no additional restrictions on what qualifies. Other organizations define the term "mass shooting" differently, as noted in a 2018 RAND Corporation report. For instance, Mother Jones counts only so-called "indiscriminate" incidents with three or more fatalities other than the death of the shooter, and excludes crimes of armed robbery, gang violence or domestic violence. Stanford University's Mass Shootings in America database skips shootings related to gangs, drugs or organized crime, but requires just three fatal or non-fatal injuries aside from the shooter.

But those who get hung up on these distinctions are at risk of missing the larger point about the frequency of multi-victim shootings — one underscored by an August 2019 Westword post published in the immediate aftermath of mass shootings in El Paso, Texas, and Dayton, Ohio, which took a combined 31 lives. According to the Gun Violence Archive, Colorado had suffered 24 mass shootings between the site's 2013 launch and the summer of 2019. That worked out to four a year.

Colorado Springs has had more than its share of mass shootings by the Gun Violence Archive standard. The most deadly took place in May 2021, when a man who hadn't been invited to a family gathering murdered six attendees before taking his own life. But even before this weekend's tragedy, five people were killed and twelve injured during mass shootings in Colorado Springs in 2022. Among these events was a shooting at a bar just down the road from Club Q in which four people were hurt.

These other shootings received little to no national media coverage, and the amount of attention paid locally was often modest — an indication of how commonplace gun violence has become in Colorado Springs and beyond.

Here's a chronological list of mass shootings that occurred in Colorado Springs from the the Planned Parenthood through the Club Q attacks, with basic information and links to additional details:

December 14, 2018
700 block of Geiger Court
Killed: 1
Injured: 3
Brandon Coffin, 28, was killed and three others (two adults and one juvenile) were injured during a shooting in a parking lot. Tony Larson, 49, was subsequently arrested for first-degree murder, while Zachary Lawson, eighteen, was taken into custody on a felony-menacing charge.

October 17, 2021
1865 North Academy Boulevard
Killed: 0
Injured: 5
Five people were injured after shots were fired outside Latin Quarters, a bar just over two miles south of Club Q, which is also on Academy Boulevard.

October 30, 2021
1350 Pleier Drive
Four killed
Two adults and two juveniles died at a house in the Colorado Springs-area community of Gleneagle in what investigators characterized as a murder-suicide.

January 9, 2022
1960 Chelton Road
Killed: 2
Injured: 3
Marcus Venezio-Hernandez, thirteen, and Nevean Tafoya, fifteen, were killed, and three others (two adults and a juvenile) were injured in a shooting in southeast Colorado Springs. Kadin Dyer Blaschke, nineteen, was arrested in Nevada for the crime several days later.

March 25, 2022
820 Citadel Drive East
Killed: 2
Injured: 2
Jeremiah Brown, twenty, and Matthew Westrich, 21, were killed outside the Citadel Mall, while a man and a woman survived their wounds. No arrests have been made in the case.

April 2, 2022
2500 block of Astrozon Circle and 2400 block of Barkman Drive
Killed: 0
Injured: 4
Estevan Pachecho, eighteen, allegedly fired several shots at a home on Astrozon Circle; residents returned fire and Pachecho fled. A few minutes later, police were called to Barkman Drive, where investigators determined that Pachecho's original targets had run him over with their truck after more shots were fired. The four people injured all survived their wounds.

November 19, 2022
3430 North Academy Boulevard
Killed: 5
Injured: 19
A gunman opened fire at Club Q.
KEEP WESTWORD FREE... Since we started Westword, it has been defined as the free, independent voice of Denver, and we'd like to keep it that way. With local media under siege, it's more important than ever for us to rally support behind funding our local journalism. You can help by participating in our "I Support" program, allowing us to keep offering readers access to our incisive coverage of local news, food and culture with no paywalls.
Make a one-time donation today for as little as $1.