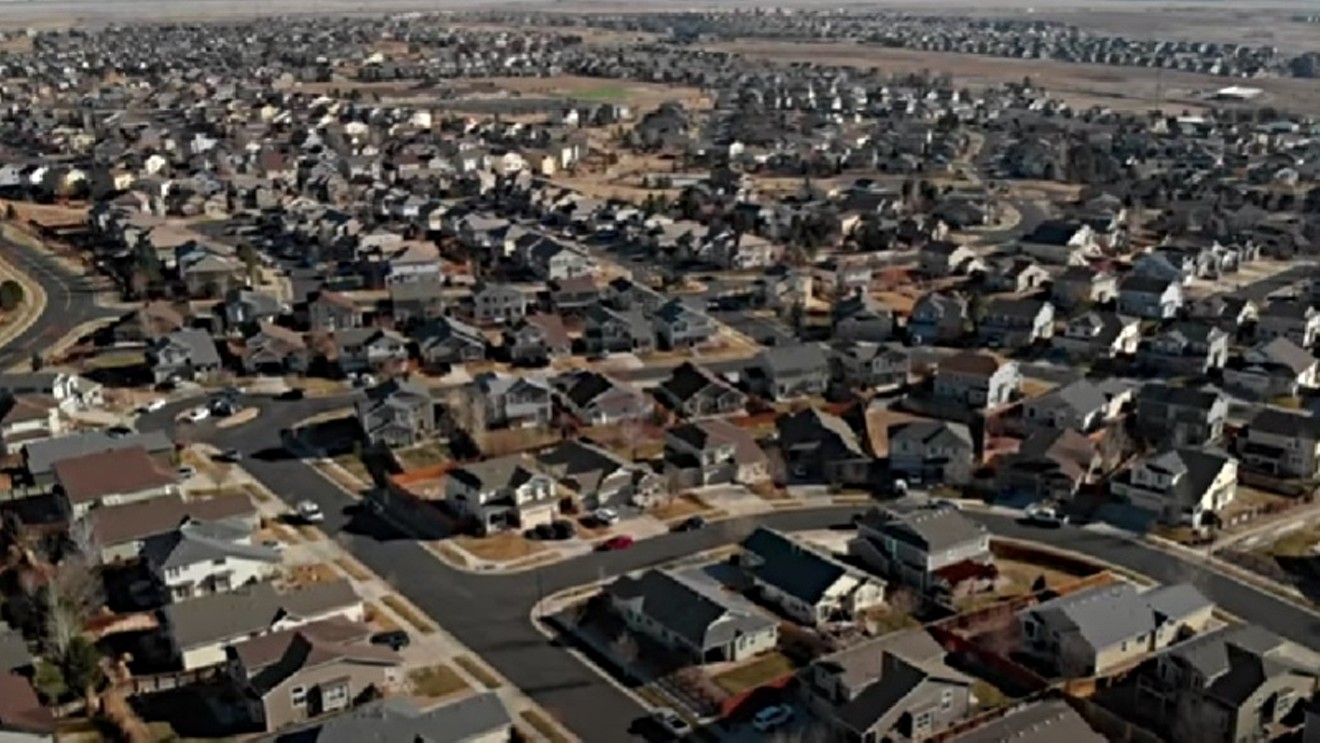 An aerial view of Commerce City. YouTube
Not long ago, Commerce City was so uncool that some locals suggested changing its name not once, but twice. Most recently, in 2010, residents rejected "Victory Crossing," and boosters decided to stick with Commerce City.

Good decision. Right now, Commerce City is among the fastest-growing places in Colorado, and its rising home values reflect how many people are eager to call it home.

But the overall improvement in Commerce City's fortunes has presented a series of challenges for the Commerce City Police Department. The population increases have been accompanied by a sizable jump in crime, and while the CCPD has been approved to hire more employees, the agency has been largely stymied.

"While the number of authorized personnel has increased," says Commander Dennis Flynn, who oversees investigations for the department, "recruitment and retention has remained a constant issue. Two issues likely impacting police recruitment and retention have been COVID...and police reform, beginning with the George Floyd social justice movement in May 2020. While these are two distinctly different issues, each has had a profound impact."

Such difficulties are hardly unique to Commerce City, but the flood of new residents makes dealing with them that much trickier, particularly when high-profile cases land one after the other. Around 6 p.m. on September 26, for instance, a man killed by multiple gunshot wounds was found on the 3200 block of East 64th Avenue. Less than 24 hours later, a shooting on the 3200 block of East 56th Avenue left a man in serious condition. No arrests have been announced in either case.

By the CCPD's estimate, the homicide on East 64th was the seventh in the city so far in 2022. But comparing that number to those in previous years can be complicated. Flynn defers to the National Incident-Based Reporting System, or NIBRS, affiliated with the Federal Bureau of Investigation, which divides homicides into two categories; the first is defined as "the willful (non-negligent) killing of one human being by another, while the second tracks "the killing of another person through negligence."

Here are Commerce City's totals in the first category from 2019 through 2022 to date:

Commerce City Police Department
And these are the amounts in the second category over the same span:

Commerce City Police Department
There's no separate bracket for attempted homicides. Instead, these crimes are grouped as aggravated assaults, which, as Flynn notes, can include "less serious crimes, including a victim struck in the arm with a stick." Nonetheless, the number of aggravated assaults in Commerce City nearly doubled from 2019 to 2021, though the pace appears to be down somewhat so far this year.

Continue to see those stats:

Commerce City Police Department
As for overall crime, Flynn provides the figures for what the FBI dubs Group A offenses, consisting of 46 specific crimes; they're generally serious, but some, like gambling and fraud, are nonviolent. The Group A numbers increased by 5.8 percent from 2019 to 2020, and 21.4 percent from 2020 to 2021, with no estimate for 2022 because the numbers are incomplete, as displayed below.

"Our city council and city leadership has been exceptionally supportive with allowing the police department to increase its personnel," Flynn points out. "We are currently authorized for 125 commissioned police officers and 42 professional staff, for a total of 168 employees." But these extra positions haven't yet been filled, and the shortfall "has become more problematic since Commerce City has grown."

How does the size of the police force balance the number of residents? To answer that question, Flynn compares figures for his community with those of two similarly sized metro cities, Broomfield and Castle Rock.

"Both of these two cities had increases in the same NIBRS Group A total reported crimes from 2020 to 2021," he says. "Broomfield had a 14.2 percent increase, and Castle Rock had a 10 percent increase." While those percentages fall below Commerce City's 21.4 percent increase during the same period, he points out that they "do not take into consideration the rapid population increase Commerce City continues to have. And while Commerce City, Broomfield and Castle Rock did have increases in crime, they were lower than those experienced by other U.S. cities," including Denver, whose 2020-2021 increase in that crime category was 21.7 percent.

Raw stats don't tell the whole story, he adds: "As the commander of the investigations section, I am intimately aware of most of the violent crime investigations, and there are several of these violent crimes where the victims engaged in dangerous and risky behavior; two victims were involved in an illegal gun sale, another was fleeing from a burglary scene, and one person was shot after killing a separate victim. I do not want to imply these are examples of 'blaming the victim,' but it is important to note that there are dangers associated with the victim being involved in a violent crime."

Given this caveat, he stresses, "I believe Commerce City is a safe place to work, live and play. And I believe the Commerce City Police Department does an admirable job of informing the public about potential crime issues, provides crime-prevention tips and conducts community town hall meetings to address crime."

But it'd sure be nice if there were a few more employees to help.
KEEP WESTWORD FREE... Since we started Westword, it has been defined as the free, independent voice of Denver, and we'd like to keep it that way. With local media under siege, it's more important than ever for us to rally support behind funding our local journalism. You can help by participating in our "I Support" program, allowing us to keep offering readers access to our incisive coverage of local news, food and culture with no paywalls.
Make a one-time donation today for as little as $1.