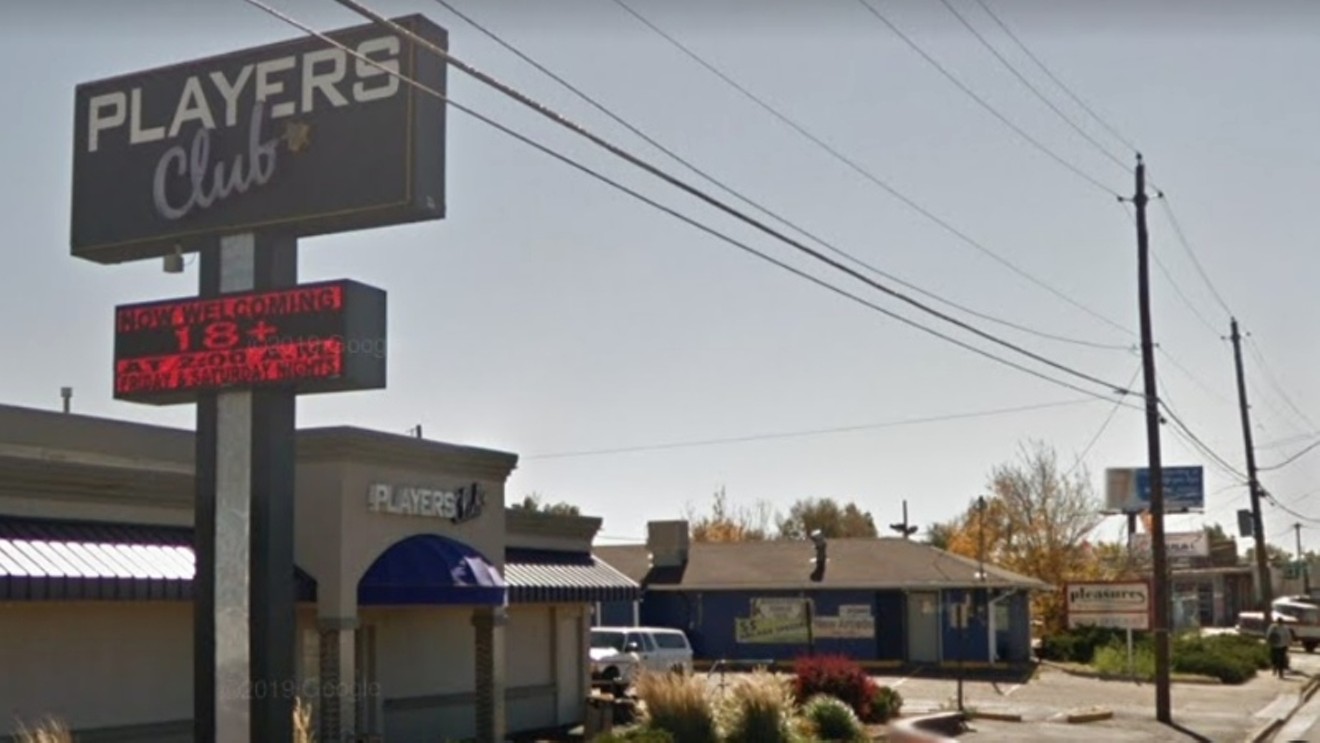 Player's Club is located at 6710 Federal Boulevard in Adams County. Google Maps
Among the notable sites in the metro area identified in a recent surge of COVID-19 outbreaks was Player's Club, an adult entertainment venue located at 6710 Federal Boulevard in Adams County, and this designation has triggered unforeseen consequences. The club is now suing the Colorado Department of Public Health and Environment, among others, over the mandate that performers must stay at least 25 feet from patrons — a safety measure that lessens the impact of all that exposed flesh, according to the complaint.

Attorneys Jordan Factor and Brenton L. Gragg of Denver-based Allen Vellone Wolf Helfrich & Factor P.C., who filed the suit on behalf of 4842 Morrison Road Corp., doing business as Player's Club, did not respond to multiple inquiries from Westword. The defendants include not just the CDPHE but its executive director, Jill Hunsaker Ryan, as well as the Tri-County Health Department, an agency that encompasses Adams County, and TCHD community outbreak investigator Trena Simons. Tri-County Health and the CDPHE both declined to comment on the case, citing pending litigation.

At first blush, the fact that Player's Club has been open at all is surprising, given that Governor Jared Polis recently ordered the closure of bars and nightclubs in light of rising COVID-19 case numbers. the venue falls under the restaurant exception, though, since it serves food, and restaurants are allowed to remain open as long as they follow numerous safety guidelines. But officials also expect Player's to follow another aspect of the state public health order quoted in the lawsuit: "Performers in a restaurant or bar must maintain a minimum of 25 feet of distance from the patrons."

That rule is laid out in the CDPHE's Safer at Home order for restaurants and food services.

On or about June 24, the suit reveals, Player's Club notified Simons and Tri-County Health that three of its employees had COVID-19; the July 1 outbreaks update from the CDPHE put the eventual total at five. Simons responded by presenting Player's Club management with "a set of written requirements that Plaintiff must satisfy before it may reopen for business."

Maintaining a 25-foot distance between performers and patrons was on the list, but the complaint contends that "Defendants provided no justification for applying the Spacing Requirement to Plaintiff." TCHD eventually authorized Player's Club to reopen as a restaurant, which it did on July 6, but stated that "Plaintiff may not provide adult entertainment unless the Spacing Requirement was satisfied for all stage performances."

Player's Club was the first strip club to be declared an outbreak in Colorado, but it now has company. The July 15 report gave this same status to Shotgun Willie's in Glendale, after four staffers tested positive for the novel coronavirus.

Click to read Players Club v. Tri-County Health, et al.
KEEP WESTWORD FREE... Since we started Westword, it has been defined as the free, independent voice of Denver, and we'd like to keep it that way. With local media under siege, it's more important than ever for us to rally support behind funding our local journalism. You can help by participating in our "I Support" program, allowing us to keep offering readers access to our incisive coverage of local news, food and culture with no paywalls.
Make a one-time donation today for as little as $1.