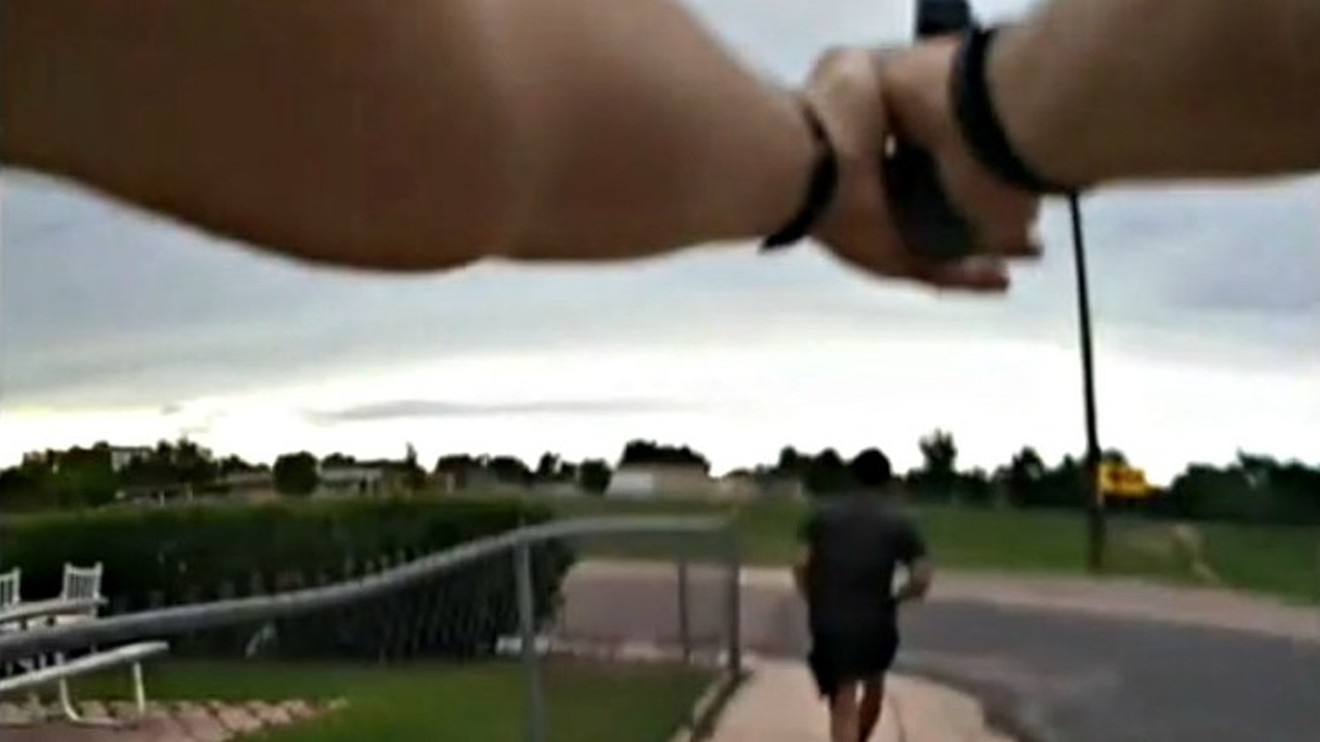 A screen capture of body-camera video showing a Colorado Springs Police Department sergeant shooting at De'Von Bailey in August 2019. City of Colorado Springs
We've written many times over the years about the tendency of public agencies to release potentially controversial news after noon on Fridays, since many people already in a weekend state of mind will miss it. But what's even more effective? Dumping such information after noon on a Friday during a global pandemic.

That's what happened on March 27, when the U.S. Attorney's Office announced that it had formally declined to press criminal charges against any member of the Colorado Springs Police Department related to the August 3, 2019, death of nineteen-year-old De'Von Bailey, who was shot in the back while running away.

The Bailey homicide was among the biggest stories in Colorado last year and garnered a considerable amount of national attention owing to body-camera footage that captured the entire incident. But an ongoing statewide stay-at-home order prompted by the COVID-19 outbreak ensured that this latest development would come and go with little notice.

Nonetheless, attorney Darold Killmer of Denver's Killmer, Lane & Newman, LLP, which represents Bailey's family, is outraged by the decision and promises that a federal civil-rights lawsuit will be forthcoming. Meanwhile, the Reverend Promise Lee, a spokesperson for the Baileys, is pushing hard for civilian oversight of the CSPD in an effort to make sure the sequence of events that led to the tragedy but failed to result in any negative repercussions for law enforcement officials isn't repeated.

On August 3, Sergeant Alan Van't Land and officer Blake Evenson responded to a soon-to-be-disputed report of an attempted robbery on the 2400 block of East Fountain Boulevard in the Springs. There, they encountered Bailey and his nineteen-year-old cousin Lawrence Stoker, who was later cleared of any wrongdoing. During the exchange, Bailey took off running, likely because he had a gun "deep within his basketball shorts," as Killmer described it during a previous interview.

Here's a video that compiles the body-camera footage of Van't Land and Evenson, preceded by 911 audio. The Van't Land material gets under way at around the ten-minute point, while Evenson's starts at about 12:30. (Warning: The imagery is extremely graphic and may disturb some readers.)


During the clip, Bailey can be seen reaching for his pocket at least twice during his interactions with Van't Land and Evenson. Early on in the Van't Land footage, he shifts his hand in that direction and begins trying to snake his fingers into the opening in the fabric, only to immediately move both hands away from his body and then raise them over his head after being ordered to do so. In the Evenson material, Bailey appears to be moving a hand toward the pocket again while sprinting away from the officers, only to quickly abandon the effort when it becomes clear that getting access to it is impossible.

Bailey never came close to grabbing the gun, much less brandishing it at Van't Land and Evenson. In Killmer's view, his only thought within a second or two of splitting appears to have been to keep running rather than to shoot at the cops or anyone else. Bailey made it just a few steps before the first projectile tore into him.


There was never a robbery, the other guy arrested is facing assault, this is just concerning, the laws in Colorado state that if they think there is a weapon they can use deadly force. CAN is the operative word. And the officer chose to kill my son when he begged to be added to the call he went there to KILL but in the same state there was a mass shooting in a theatre where so many people were killed.... but that man sits in jail until this day he was taken alive. I can go on and on about the injustices of Colorado because believe me I have done my research. They will be exposed they murdered my son and I will not let it go. We have to stand up for what is right. Ignore the ignorance of "others" because we already know how some of "them" feel about us. #LLDMB #NOJUSTICENOPEACE

These arguments don't appear to have persuaded U.S. Attorney Jason Dunn. On March 27, his office issued a statement that begins: "The Federal Bureau of Investigation is charged with reviewing shootings by police officers to determine if there is evidence of federal criminal civil rights violations in connection with such shootings. Officer-involved shootings constitute federal criminal civil rights violations only when officers willfully deprive people of their constitutional rights to be free from unreasonable seizures or the application of unreasonable force."

Killmer's reaction, shared via email, resonates with frustration and resolve. "We are not surprised that Donald Trump’s Justice Department is refusing to press charges arising out of the killing of nineteen-year-old De’Von Bailey," he writes. "Even though this was a brutal killing, the shooting in the back of a teenager that was running for his life, the Colorado Springs police are once again given a free pass. There has been a chilling history of police brutality and violence by the Colorado Springs police, particularly against people of color. It is clear that we cannot expect law enforcement to protect the rights of the people when it comes to police brutality in Colorado Springs. The family will be required to enforce De’Von’s rights in a civil rights lawsuit and federal court. The family and the Colorado Springs community are determined to see justice done. When the laws are not enforced against those who are supposed to enforce the law, then people must enforce their own civil rights. The family will do that."

For his part, Lee says, "We're not surprised" by Dunn's choice. "Disappointment comes based on expectations, and we did not expect for the U.S. Justice Department to do anything different than what they've done. There's a pattern and a history that we've come to realize, and it continues the perpetuation of injustices when it comes to people of color, particularly young black men. The community will continue to insist that the family gets justice in a civil-rights lawsuit. And we're also trying to put things in place to reduce or eliminate the chances that something like this happens in the future."

Specifically, Lee and a group of community leaders, including Wayne Williams, a Colorado Springs City Council member and former Colorado secretary of state, as well as a prominent Republican, have been looking into the possibility of implementing civilian oversight for the CSPD. Lee was among a group of twelve leaders, including two officers from the police department, who attended an early-March conference in Austin, Texas, put on by the National Association for Civilian Oversight of Law Enforcement, and he says the experience left him even more convinced that such an approach is desperately needed in the Springs.

Unfortunately, Lee says, Colorado Springs Mayor John Suthers has shown little interest in putting such a structure in place: "There has to be openness on both sides, but he's drawn a line in the sand." As a result, Lee feels the best way to establish a civilian oversight board would be to put it up to a vote of the people, and a ballot measure is being seriously considered right now.

"If projections are correct regarding our city's anticipated growth, and if we sincerely do want to attract people, such as people of color, and want to be Olympic City USA, then it's more than appropriate to have some type of genuine police oversight in a city our size," Lee emphasizes.

As for the way the U.S. Attorney's Office made its determination public, "That's typical," Lee says. "I'm not trying to negate the fact that because the focus is on COVID-19, certain things get obscured. But the police department put the shooter back on the street the same day as De'Von's funeral. We think those things are intentional."
KEEP WESTWORD FREE... Since we started Westword, it has been defined as the free, independent voice of Denver, and we'd like to keep it that way. With local media under siege, it's more important than ever for us to rally support behind funding our local journalism. You can help by participating in our "I Support" program, allowing us to keep offering readers access to our incisive coverage of local news, food and culture with no paywalls.
Make a one-time donation today for as little as $1.