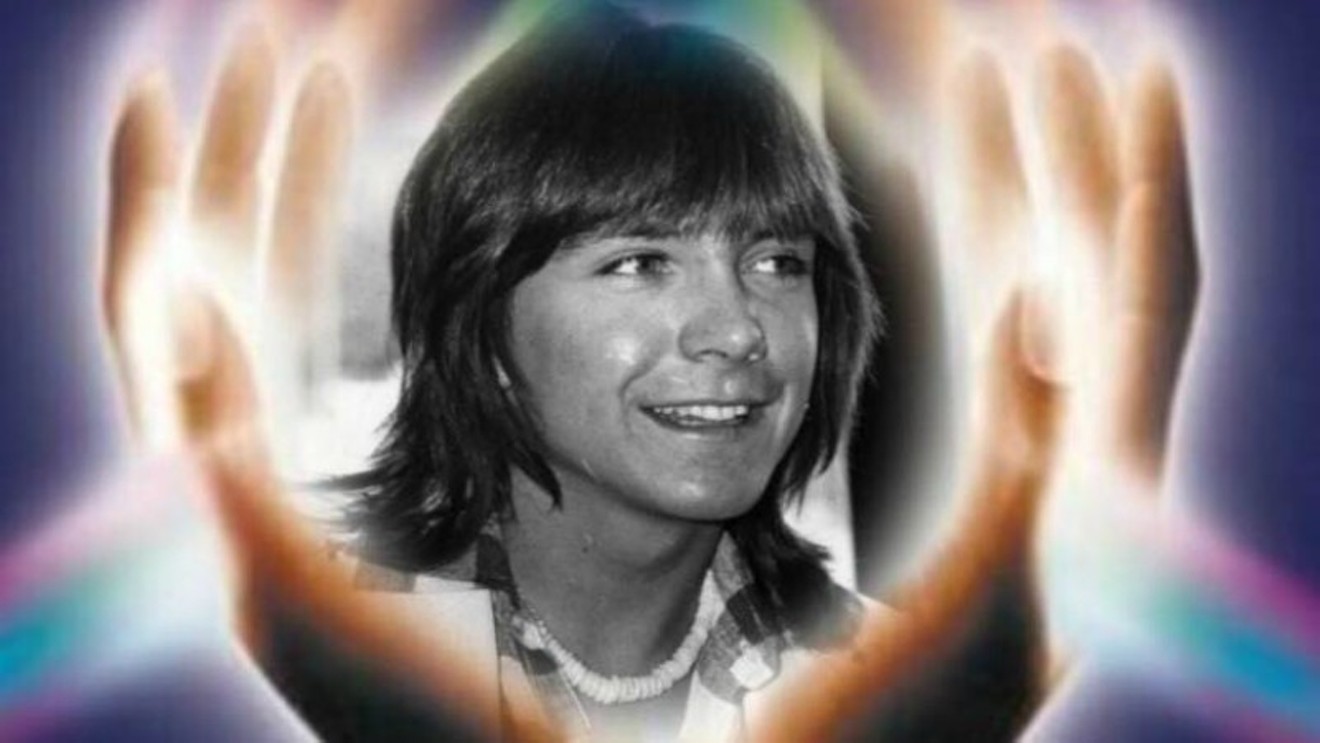 The Partridge Family Temple Facebook page shared this image of David Cassidy after news broke about his death. Facebook
Actor David Cassidy, who's best known for portraying heartthrob Keith Partridge on the 1970s sitcom The Partridge Family, died on November 21, just shy of nine months after revealing that he was battling dementia. Among those shaken by the news is Shaun Partridge, co-founder of the Partridge Family Temple, a highly unusual Denver-born religious organization that worships Cassidy as the human incarnation of a god, as we described in a 1995 Westword feature article. Shaun is choosing to focus on celebrating Cassidy's life as well as mourning his death, as is clear from a eulogy he wrote to the former teen idol.

The complete remembrance is on view below. But an excerpt reads: "We celebrate your life in the New Forever and we hope one day to be united in Albuquerque with you in the Land of Milk and Honey."

As we noted in our February post about Cassidy's dementia diagnosis, Shaun currently lives in Portland, Oregon. But the seeds of the Partridge Family Temple were planted in Denver circa 1988, when he and fellow PFT co-founder Reverend Dan Partridge visited the home of Mile High resident Adam Sleek and were lifted to a higher plane by Keith/Cassidy and his fellow Partridge Family relatives: mother Shirley (Shirley Jones) and siblings Laurie (Susan Dey), Danny (Danny Bonaduce, who did talk radio in Denver in the early 2000s, as Alice star Jamie White detailed in a recent Q&A), Chris (alternately portrayed by two actors, Jeremy Gelbwaks and Brian Forster) and Tracy (Suzanne Crough).


"Adam just kept playing Partridge Family music constantly — I'd wake up to it," Shaun says. "It was starting to piss me off, the way he would stare at us and sing the songs over and over again. But then I started listening to it and I realized — hey, this is good music. And then, a little bit later, I had the revelation that the people in The Partridge Family were the gods and goddesses you read about in school. They've been around since the beginning of time, but they had different names in different ages. And in 1970, they decided, `Hey, let's get a hit TV show.'"

"After that, Keith spoke to us and said, 'I am your Lord — worship me,'" Reverend Dan goes on. "And for a couple of weeks I said yes, and I was teaching everybody about the beauty of the Partridge Family. But then I started doubting it. But then I had another experience: I was in a car accident and I was drowning in a giant pool of blood, and Laurie pulled me out of the pool of blood with her hands and gave me a French kiss, and it brought me back to life. I didn't doubt anymore after that." 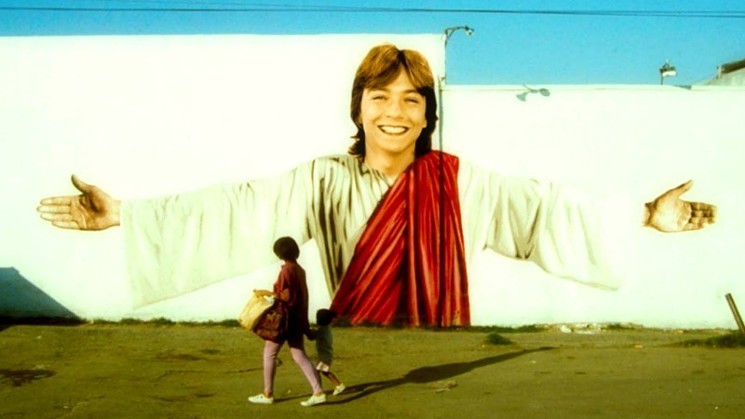 Another photo from the Partridge Family Temple Facebook page catches David Cassidy in a messianic pose.
Facebook
In the Partridge Family Temple theology, Keith is the war god, and also the male sex god, because in his autobiography (C'mon, Get Happy: Fear and Loathing on the Partridge Family Bus), Cassidy dished about his enormous penis and horizontal escapades with the likes of Italian screen sensation Gina Lollobrigida. Shirley, for her part, is the virgin mother/earth goddess, Laurie is the holy whore of Babylon, Danny is the trickster god, and Chris and Tracy are the essence of innocence.

Together, Partridge Family Temple members believe, this quintet offers a road to "pure bliss that bathes Temple devotees from birth until death," the 1995 story notes. "And beyond: According to Templers, all of us will eventually ascend to Albuquerque (a destination foretold in the Partridge Family song 'Point Me in the Direction of Albuquerque'), which they describe as a heavenly place that looks a whole lot like a giant Casa Bonita" — an eatery that Reverend Dan once dubbed "our holy temple."

The best-known Partridge Family Temple worshiper is Boyd Rice, an experimental/noise musician who's recorded under the name NON and his own moniker; Shaun and his sister, Giddle Partridge, have contributed to his albums. Another Denverite, Rice also served a stint as official spokesperson for the Church of Satan.

As for Cassidy, he spoke to us about the Partridge Family Temple back in 1995, as he was headed to Denver to co-star in the stage presentation of Blood Brothers alongside English songbird Petula Clark — a prospect that delighted the assorted Temple members.

"I've done some concerts around the United States in the last two or three years, and they've come to a couple of my shows," Cassidy said at the time. "They were handing out literature and all kinds of bizarre stuff. At first I thought it was just somebody winding me up, but then I had a couple of the guys who work for me check it out, and they told me they talked to someone who was seemingly very convinced that he was a high priest of the Partridge Family church." 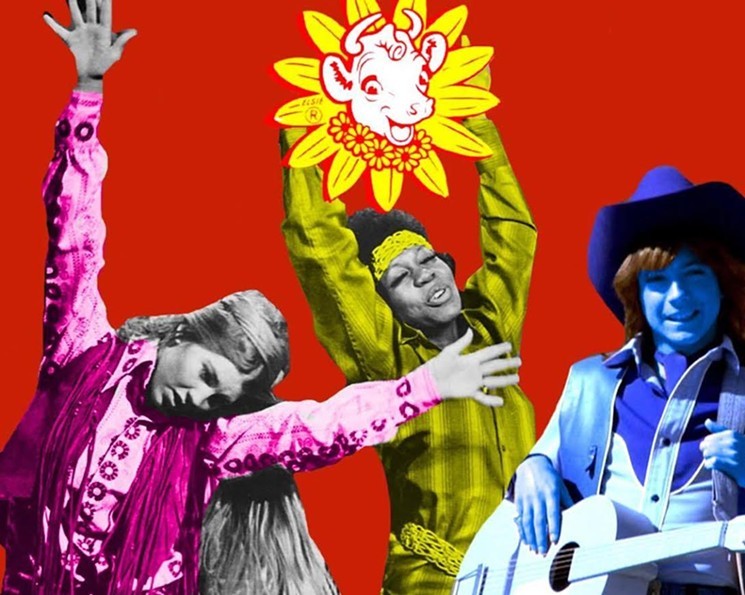 A "God advertisement" created by artist Whale Song Partridge.
Courtesy of Shaun Partridge
When it came time to comment on the Temple, however, Cassidy was cautious. "I don't mind it if it's just for fun," he said. "The Partridge Family definitely depicted fun and was representative of a time of freedom — really the last gasp of innocence in America. There was a dichotomy there, in that it was an era when dope, sex and cheap thrills were socially acceptable. Yet it stood for a very moral picture of what American families were like."

He added: "Once one puts the spin of religion or church on it, though, it suddenly becomes rather serious, and we get concerned. As somebody brought up here in America, I respect everybody's right to choose whatever religious belief they want. But believe me, these were fictitious characters. The producers and the creators of the show only wanted to do something that would be a good time and commercially viable."

That Cassidy withheld his blessing didn't dampen the enthusiasm of his congregants. Nearly three decades after the truth about Keith and company was first disclosed, Shaun and the Partridge Family Temple have an active presence on Facebook, Twitter, YouTube and Tumblr by way of a page festooned with graphics by one Whale Song Partridge. There's also a website that is currently peddling To Know God Is to Love God, a book available for just $22 plus $5 for shipping and handling. Among the topics taken up in the tome is "Un-Yoga, which is based on the holy elixir 7Up," Shaun told us earlier this year. (7Up was Keith's favorite beverage.) According to him, "Un-Yoga is basically alchemy and yoga as one. As we walk through this crazy blue-marble dream, we try and take the negative and transform it into the positive magic of Albuquerque."

This past weekend, Cassidy reportedly suffered a health crisis. "When we heard about his sudden illness on Saturday, it was very surprising," Shaun notes via email. "Then of course we thought, 'Well, maybe he'll get a liver transplant.' But now he's in Albuquerque."

Shaun adds: "In all honesty, no one could love David Cassidy more than his family and friends and the people he truly knew. His death is a tragedy but his music and art was fantastic and will Iive on forever. Tonight, The Partridge Family Temple and the Children of the Fun are drinking 7-Up and listening to his solo record and other Partridge Family long-players. The Sun sets, but the Fun will always rise!" 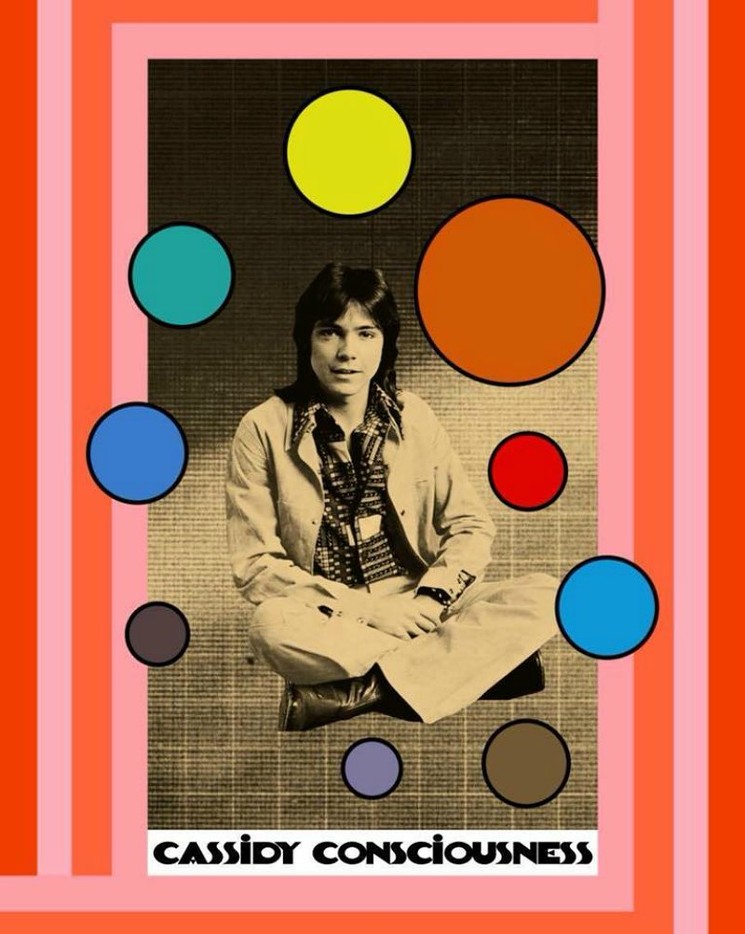 Courtesy of Shaun Partridge
The mourners all in black sit clutching rosary beads, lunch boxes, autographed photographs and patches. Tears stream down their faces as a steady rain falls from the gray sky, dripping off the tree branches and leaves. Shirley Partridge stands up wearing a black velvet trouser suit, her hair glowing beautiful and blonde on this dreary day. The white casket has not yet been lowered into the black, yawning rectangle beneath it.

People start to sob loudly but she continues, "But we know in truth that this is the natural order of things. There are a lot of things that are painful that grow from the bitter harvest of truth and we should never forsake the opportunity to eat deeply from that fruit, even if it’s taste is ever so bitter."

Tears well up in Shirley’s eyes as she continues, "Keith was the apple of my eye and now we plant his seed into the earth so his truth can take root and grow like the living vine that is everlasting."

The mourners slowly start to rip at their black clothes until they sit and stand naked, shivering in the relentless downpour of rain. Laurie, Danny, Christopher, Tracy and Rueben sit stoically, as tears flow down their faces, pooling onto the ground, mixing with the rain and the mud. Bobby Sherman clad in all purple, stands up holding an ancient, dented silver bell and hits it with a wooden stick causing it to ring loud and pure all over the graveyard. As he rings the bell over and over again, the white casket is slowly lowered into the black doorway of the Earth.

As Shirley and Laurie and Danny throw handfuls of dirt onto the casket, Christopher and Tracy sing in unison with trembling voices:


There's an aching in my head
From this bed I can't get used to
It's these little hours in the dark, I dread
As I spend my first night alone without you
Half of me has gone away
Gone the love I learned to cling to
Tomorrow I'll have to find a way
To live the rest of my life alone without you....

The Partridge Family Temple would like to thank David Cassidy, a.k.a. Keith Partridge for his existence and his ongoing inspiration. His music, his voice and his many amazing appearances on television. We will never forget you as you have never forgotten your fans. We celebrate your life in the New Forever and we hope one day to be united in Albuquerque with you in the Land of Milk and Honey.