Sexy Pizza founder Kayvan Khalatbari is ready to bite into Trinidad. Jake Holschuh
Two years ago, Kayvan Khalatbari was campaigning to become mayor of Denver, a city where he ran a handful of businesses, including a string of pizza parlors, an arts-and-culture magazine, a comedy promotion outfit and a marijuana industry consulting firm. Khalatbari eventually dropped out of the race, citing personal reasons, and has focused his attention on a much smaller city.

He now lives in Trinidad, a southern Colorado town of under 9,000 people located 25 miles north of the New Mexico border off Interstate 25.

The 37-year-old still has business interests in Denver, including his Sexy Pizza outposts and Birdy magazine, as well as a home here. (He says that while he's out of Colorado's marijuana industry, he's keeping an interest in pot businesses in other states.) But he's moved on from the Mile High City.

"Denver's become, politically, a place driven by tourism and extractive capitalism, and it's very hard to get our elected officials to see a different way of doing things," Khalatbari explains. "Environmentally, the air quality there is trash. The traffic — there's just not a high quality of life there. I had to find a way to transition out of the city."

He found it by investing in Trinidad, purchasing three buildings in the town over the past few months alone, including a century-old church that he plans to renovate into an event space, a personal residence that he just closed on in August, and a 15,000-foot commercial building on the town's Main Street. He's also bought several vacant lots in the downtown district.

Khalatbari isn't the only person with roots in Denver now paying attention to Trinidad. Influential developer Dana Crawford, who got her start saving a block of downtown Denver and turning it into Larimer Square more than fifty years ago, has formed an alliance with Khalatbari to revitalize Trinidad's commercial space. Khalatbari is also working on projects in the area with Karl Gabrielson, a general manager of Downtown Trinidad Redevelopment Group and business partner with Phil Long Automotive Group CEO Jay Cimino.

And Khalatbari promises that a "very well-known Denver business" will soon open a second location in Trinidad. That claim is backed up by Wally Wallace, the town's development coordinator (and a friend of Khalatbari's), though neither will reveal what business it is.

Khalatbari also plans to open a think tank for start-up businesses in his commercial space, and hopes to build a bodega, cafe and shared housing on his empty lots, where tenants would pay small down payments and combined mortgage payments rather than rent.

"Instead of being a renter and leaving at the end of their term with nothing, these people leave with a check," he says. "They buy in to be a part of it; they're participating in the debt pay-down on that property, and they're participating in the appreciation. ... The goal isn't profit. It's getting into ownership, a cardinal barrier, and getting a check at the end of it."

Like many Americans fleeing urban communities for rural towns since the COVID-19 pandemic began, Khalatbari has moved to a smaller, quieter pond — but he's making some ripples.

Earlier this month, a Facebook group titled Communists 4 Trinidad CO invited local residents to a "Communist parade and picnic" on Saturday, September 12, both pinned to the church Khalatbari had purchased and a comedy event that Wallace had organized the same day at nearby Fort Wooten. Around the same time, Wallace says, fake fliers for the comedy show with Soviet graphics were distributed around town, leading Fort Wooten to eventually cancel the event.

The group's Facebook page had started out as Trinidad, CO Is Awesome; the name changed to Communists 4 Trinidad CO three days later, on September 7, with the stated goal to "encourage communists to visit and move to Trinidad." Declining to identify himself, the page's administrator says that it was created as satire. Both Wallace and Khalatbari insist that they're not behind the Facebook activity, nor are they communists.

Khalatbari didn't mind ruffling political feathers during his time in Denver, loudly criticizing former governor John Hickenlooper and Mayor Michael Hancock while advocating for homeless rights and such issues as a shared economy and public banking, a system that creates a network of peer-to-peer lending. He's aware that his reputation has followed him to Trinidad, but he says it's "fucking asinine" for anyone to think he's a communist.

"I went from homeless to semi-retired in twelve years. You can't do that without a few capitalistic bones in your body," he says. "To call me a communist couldn't be further from the truth. What I am is a social capitalist."

And if there's any Colorado town that's embraced the free market system, it's Trinidad, where the city council voted to allow unlimited recreational marijuana dispensaries when recreational pot sales became legal on January 1, 2014. There are currently 25 dispensaries operating in the town, and the cannabis industry has provided a major boost in tax revenue since 2015, helping fund other local businesses during statewide shutdowns this spring.

Wallace says that the town's commercial presence is actually growing in 2020, and he sees potential outside of pot. Fisher's Peak, a new state park established this year, will present a chance to diversify, and Trinidad is also taking advantage of an increasing desire to move away from cities during the pandemic and political unrest. Now is the time to make a move, he believes, and bring more businesses to Trinidad that make people want to stay after they visit. 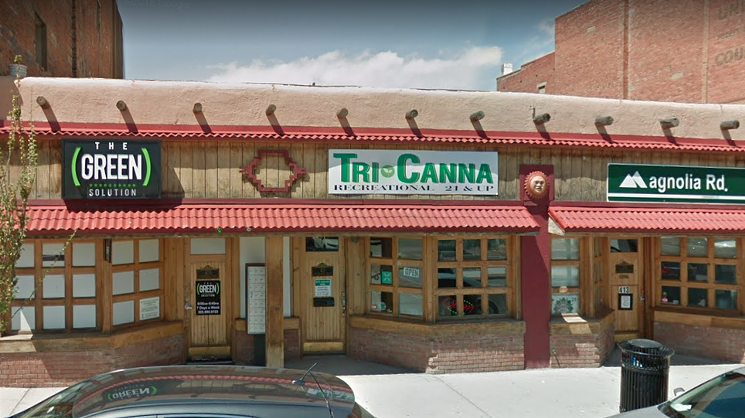 Trinidad is home to 25 marijuana stores despite having a population of under 9,000.
Google Maps screenshot
"I don't think things have slowed down here. We're still getting a lot of traffic, hotels are being filled. I host an Airbnb, and it says Trinidad bookings are up 30 percent from this time last year," Wallace says. "Even before COVID happened, part of what drove me down here two years ago was the realization that all of us city dwellers are working so hard for unattainable houses and more and more difficult living scenarios."

More restaurants are part of his plan for the town. Wallace also says he's talking with a Denver music venue thinking of opening a location in Trinidad, as well an outdoor recreation retailer based in Grand Junction — though he's quick to note that he "doesn't want to see the town turn into Denver part two or Telluride."

"We don't have Indian food or Greek food, and we need more grocers. There are a lot of holes that I think could be filled," Wallace says. "The comprehensive plan is for the city not to be a suburban sprawl, spread out with a large footprint, but to try to infill and restore a lot of the buildings."

Some Trinidad residents are wary about the newcomers, though, having lived through boom-and-bust cycles before.

The town's history is intertwined with coal mining and the country's labor movement; it was the site of the Ludlow Massacre in 1914. After coal petered out, the town hit another gold mine in the ’60s, when Dr. Stanley Biber made Trinidad a haven for gender-reassignment surgery; Trinidad's reputation as the sex-change capital of the world lasted for decades. Over the past six years, though, the town has drawn visitors from New Mexico and Texas shopping for legal pot, as well as other travelers hopping off I-25 to fill up their gas tanks. To keep visitors in Trinidad longer, Wallace would like to see the town create spaces for people to consume the marijuana they purchase there, then spend more money at hotels and restaurants.

Trinidad City Council is currently considering approving marijuana hospitality, which would allow dispensaries and other businesses to apply for social consumption licenses, something both Wallace and Khalatbari are pushing as a way to further distinguish Trinidad from the vast majority of Colorado locales banning social pot use. Khalatbari, who as a dispensary owner helped push the 2016 Denver ballot initiative legalizing marijuana hospitality, insists that he has no plans to introduce marijuana hospitality in any of his properties — though he doesn't rule out the idea of leasing a property to a tenant who might.

"There's not going to be 25 dispensaries in Trinidad forever," Khalatbari notes. "In five years, there's probably five or ten. They need to find something else outside of the state park to drive the town's economy."

During a recent council meeting, Mayor Phil Rico publicly wondered if Wallace was pushing for marijuana hospitality so that Khalatbari could attain a business license, which both Wallace and Khalatbari deny.

"I've made it very clear that I have zero interest in participating in that myself. Just because I've been involved in the cannabis industry, the mayor thinks I'm buying all of these buildings for marijuana hospitality, and that couldn't be further from the truth," Khalatbari says. "Thereare people who have lived in that town for a long time who have seen folks come in to be extractive....

"I'm here for the long haul."
KEEP WESTWORD FREE... Since we started Westword, it has been defined as the free, independent voice of Denver, and we'd like to keep it that way. With local media under siege, it's more important than ever for us to rally support behind funding our local journalism. You can help by participating in our "I Support" program, allowing us to keep offering readers access to our incisive coverage of local news, food and culture with no paywalls.
Make a one-time donation today for as little as $1.