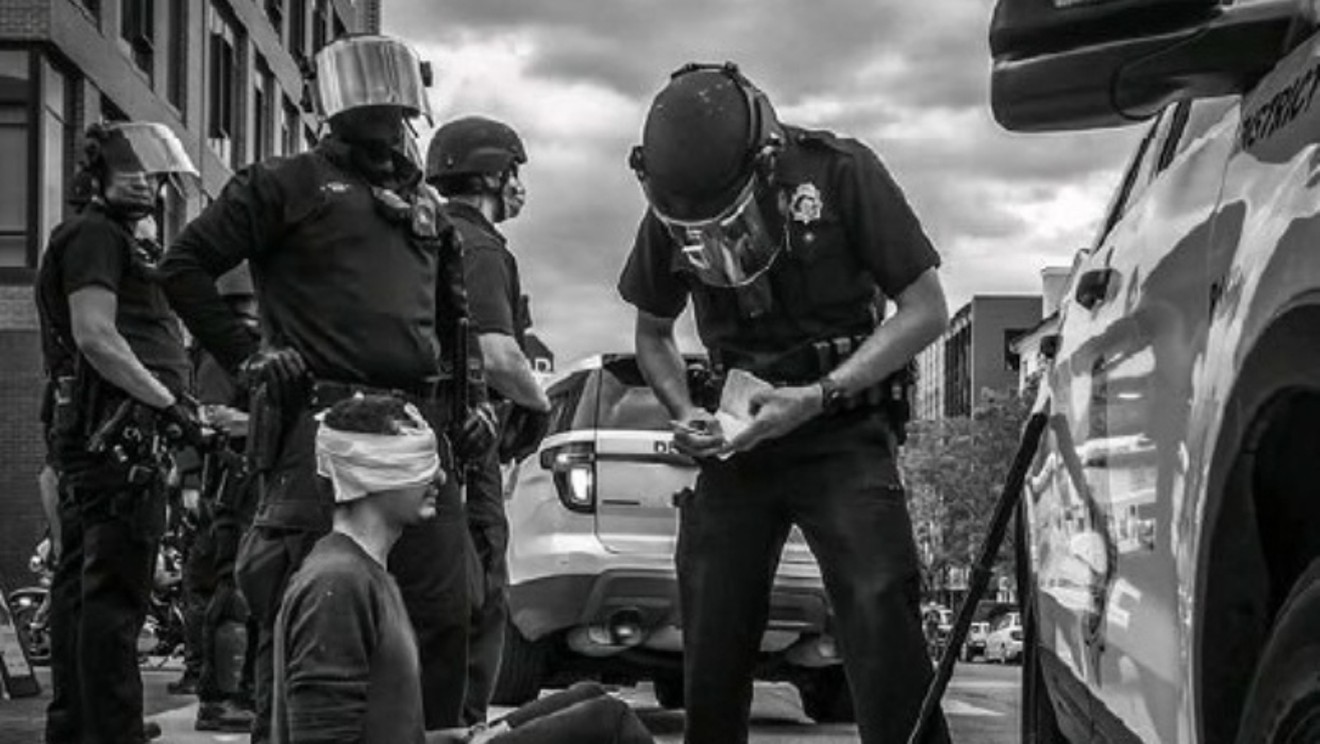 Michael Acker after being shot in the eye during a May 2020 Denver protest. Killmer, Lane & Newman LLP
On January 24, Denver City Council approved a $500,000 settlement for college student Michael Acker, who was shot in the eye with a 40mm baton round fired by a police officer during the social justice protests that erupted downtown after the police killing of Minneapolis's George Floyd in May 2020. But Andrew McNulty of Denver-based Killmer, Lane & Newman LLP, who represents Acker, believes this payout will prove to be only a small percentage of the total that Denver will eventually have to pony up in relation to alleged brutality during the demonstrations.

"It's hard to quantify," McNulty acknowledges. "But with paying lawyers to defend the city and paying settlements, I wouldn't be surprised if lawsuits cost Denver between $25 million and $50 million."

Based on the amount that Acker received in what McNulty believes is the first city settlement for injury at the protests, this prediction doesn't seem like outrageous hyperbole. By one count, at least fifty people have sued the city over the treatment they received. McNulty notes that he's filed one complaint in addition to Acker's and expects "about five others" to hit the courts in the next couple of months.

Acker was shot "on the first day of the protests, around 7 p.m., before dark, on May 28," McNulty recounts. "People had walked on I-25 — Michael hadn't done that — and everyone was marching back toward the Capitol. There had been no reports of violence or property destruction, just peaceful protest. But he was shot in the face because a couple of people in the crowd threw bottles at police."

McNulty contends that after shooting Acker, the officer who fired the round shouted, "Motherfucker, that's what you get! Fuck you!" 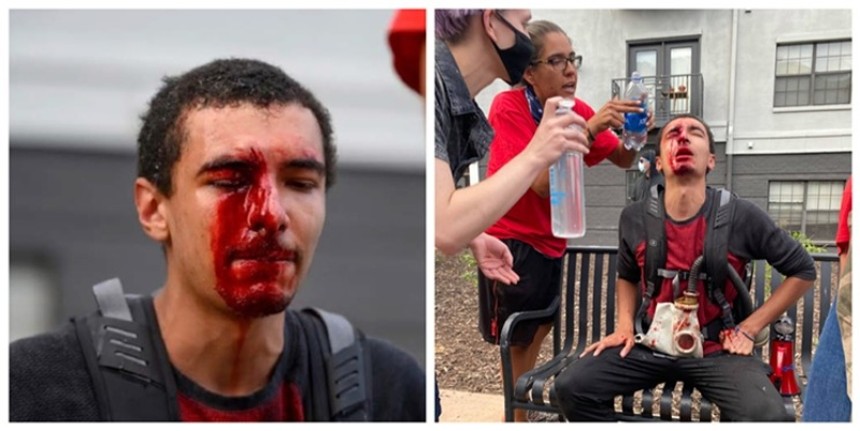 Two images of Michael Acker's injury shared in the lawsuit.
Killmer, Lane & Newman LLP
"These cops were clearly keyed up and ready to go to war," McNulty says. "They were living out their fantasy of getting to put on tactical gear and act like they were in a situation of war, when they were actually going up against people with no armor and no weapons who weren't doing anything wrong."

Even more frustrating to McNulty is that the officers involved weren't punished for their actions. "If you're a Denver police officer and you shot someone in the face with a 40mm baton round and yelled at that person, but you didn't receive any discipline, would you change your behavior next time? No," he suggests. "That's a signal that, 'Hey, it's okay.' But that kind of thing happened again and again during the protests, where baton rounds and tear gas were fired into completely peaceful crowds."

McNulty deposed Denver Police Chief Paul Pazen as part of the lawsuit. "I showed him the video of what happened and straight-up asked him, 'Is this an acceptable use of force?' And he refused to answer." he says.

The Denver Police Department declined to discuss the Acker case. "An internal review into this incident remains open," the DPD notes in a statement. "Therefore, it would be inappropriate for us to provide a comment or interview." The Denver City Attorney's Office said it wouldn't discuss cases stemming from the protests because "we do not comment on pending litigation."

Since Acker was wearing a gas mask when he was shot, he didn't suffer permanent damage to his eye. "He got lucky," McNulty points out. "But a lot of other people who were injured didn't get as lucky." They include Russell Strong, who sued the city last year after losing an eye to injury at the protests.

Nonetheless, McNulty says, Acker "still has the emotional damage that comes from being shot in the face for peacefully protesting as a young Black man in America. He's a resilient person, and he is hopeful that this settlement will send a message to the City of Denver, and also a message to its citizens to stand up and say the policing that happened during the George Floyd protests was unacceptable. Hopefully, it will cause them to call their elected officials and tell them that something needs to change."

This post has been updated to include statements from the Denver Police Department and the Denver City Attorney's Office.
KEEP WESTWORD FREE... Since we started Westword, it has been defined as the free, independent voice of Denver, and we'd like to keep it that way. With local media under siege, it's more important than ever for us to rally support behind funding our local journalism. You can help by participating in our "I Support" program, allowing us to keep offering readers access to our incisive coverage of local news, food and culture with no paywalls.
Make a one-time donation today for as little as $1.