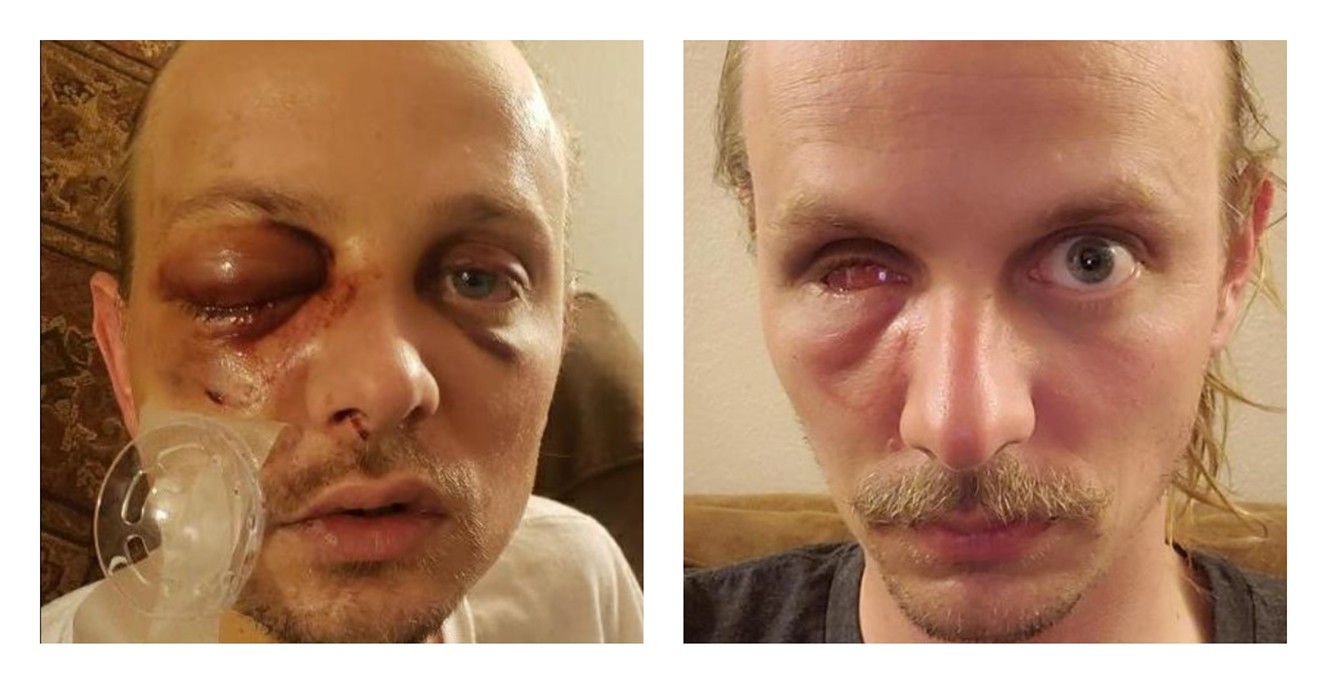 Photos of Russell Strong before and after surgery that resulted in the removal of his eye. Rathod Mohamedbhai LLC
The City and County of Denver continues to deal with legal fallout from the Denver Police Department's actions during last summer's racial-justice protests. At least five lawsuits have been filed to date, including a complaint by Michael Acker that contends the DPD shot to maim. But Russell Strong's salvo, submitted this week, could be the most shocking.

According to attorney Matthew Cron of Denver-based Rathod Mohamedbhai LLC, which represents Strong, his client lost an eye after being struck by a kinetic-impact projectile, or KIP, as Denver police officers confronted demonstrators. At the time, Strong was holding a sign displaying a peace symbol while standing behind a group of fellow participants kneeling with their hands up.

"It was an extremely peaceful gathering, from everything we've been able to discern — when, without warning, officers simply began firing on this crowd," Cron explains. "One eyewitness said that when the kneeling protesters got up to run, police started shooting them in the back. And what purpose could it possibly serve for officers to be deploying force on individuals who were actively leaving the scene, except to inflict pain, exact revenge and cause carnage?"

Asked about the Strong lawsuit, a Denver Police Department spokesperson offers this response: "Out of respect for the court process, we are unable to provide comment at this time due to pending litigation."

Cron, however, has plenty to say about what happened to Strong on May 30 at Civic Center Park.

"Our client went to the park to exercise his freedom of speech — to peacefully assemble and petition the government for redress of grievances," he says. "All he did was stand in the park holding a sign in a relatively sparsely populated demonstration when, all of a sudden, the police started firing KIPs. Mr. Strong was struck in the face, and it shattered bones in his eye socket. Ultimately, he had to have his eye removed a few days after being shot. The damage was so severe that doctors couldn't save it."

KIPs are often categorized as being less than lethal, but Cron questions this designation. "I believe it's a misnomer," he says, "since it implies that such weapons cannot inflict lethal force, and that's simply untrue. Such weaponry has been known to cause death and serious bodily injury, and the damage they did to civilians in Denver and elsewhere in Colorado proves their danger."

Since this law wasn't in effect at the time of the protests following the death of George Floyd at the hands of Minneapolis police, the unknown officer who shot Strong can't be accused of violating it. But Cron notes that even before the incident involving his client, the Denver Police Department's use-of-force policy contained what he sees as contradictory recommendations about the deployment of KIPs — and his viewpoint is underscored by a Denver Office of the Independent Monitor analysis from December.

The policy "prohibits the use of KIPs against individuals unless there is active aggression, and also prohibits their use if they're aimed at the head, neck or face region unless there is a need for deadly force," he says. "But as the Office of the Independent Monitor pointed out in its report, the policy has a giant loophole. It allows for the use of KIPs against 'members of a crowd that constitute an unlawful assembly and/or disruption to pedestrian or vehicle traffic.' So the policy recognizes that KIPs are very near to deadly force, which is the highest standard of force that can be used by law enforcement, yet it can be used against a crowd for nothing more serious than disrupting traffic."

Cron adds, "If you respect and love the U.S. Constitution, you should respect and love what Mr. Strong did here. He exercised rights that are squarely within the boundaries of the First Amendment. And to suffer such heinous, life-altering injuries that affect every facet of his life due to these protected activities is an unspeakable tragedy."

Click to read Russell Strong v. the City and County of Denver, the Denver Police Department use of force policy, the 2020 Enhance Law Enforcement Integrity act and the Denver Office of the Independent Monitor report about the 2020 George Floyd protests.
KEEP WESTWORD FREE... Since we started Westword, it has been defined as the free, independent voice of Denver, and we'd like to keep it that way. With local media under siege, it's more important than ever for us to rally support behind funding our local journalism. You can help by participating in our "I Support" program, allowing us to keep offering readers access to our incisive coverage of local news, food and culture with no paywalls.
Make a one-time donation today for as little as $1.