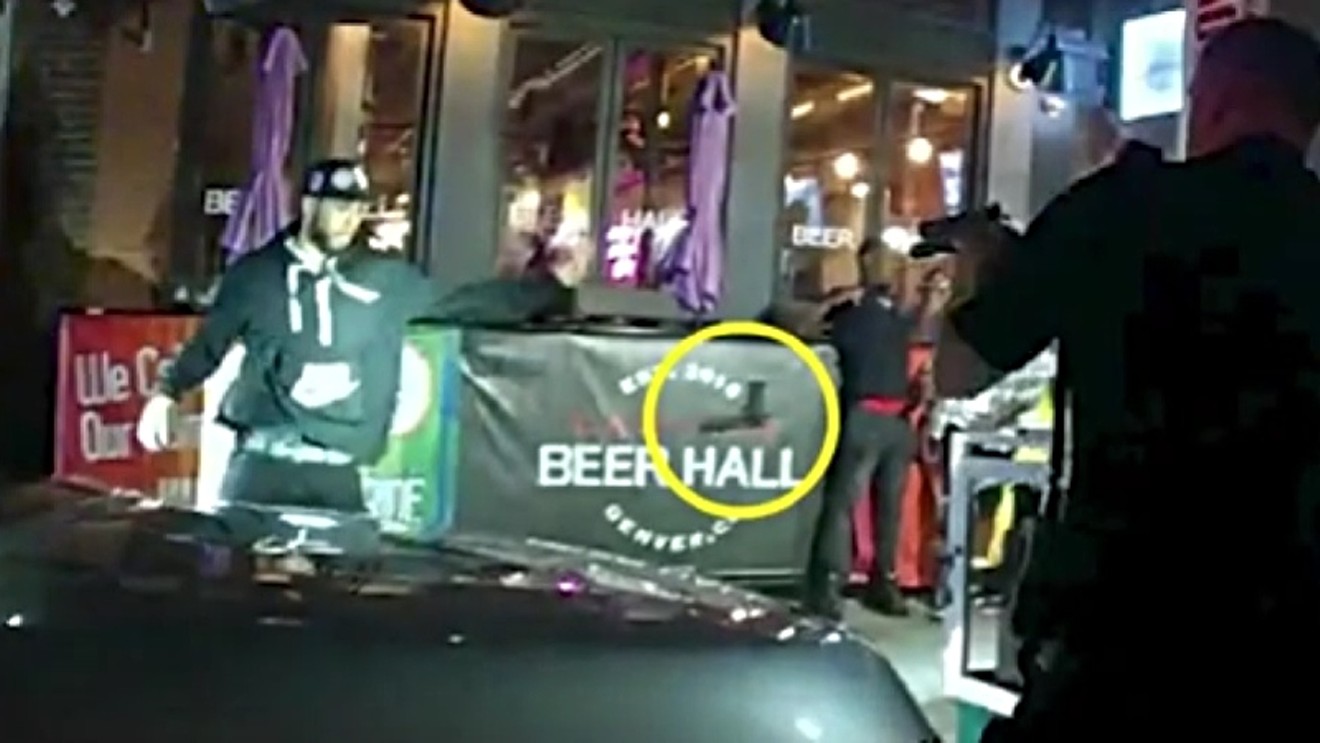 An enhanced screen capture from video footage of the July 17 officer-involved shooting near 20th and Larimer shows that suspect Jordan Waddy had tossed his firearm aside before a Denver cop opened fire. Denver Police Department via Tyrone Glover Law/YouTube
On August 17, the Denver Police Department released videos of the officer-involved shooting near 20th and Larimer streets on July 17 in which suspect Jordan Waddy and six innocent bystanders were injured, and the office of Denver District Attorney Beth McCann announced that a grand jury would be asked to review the case.

Attorney Tyrone Glover of Tyrone Glover Law, who represents Waddy in a civil-rights context, sees this last step as unnecessary. "The DA could look at the tape and bring charges," he says in reference to the videos, which he compiled into a clip that plainly shows Waddy tossed his gun aside and was unarmed when an officer opened fire. "If they want to utilize the grand jury process, that's within their purview." Glover says that he's "cautiously optimistic" that criminal indictments will result from the grand jury's investigation, but adds: "We've seen what happens when these kinds of things involve officers. They don't always come back fair."

A statement from Rathod Mohamedbhai LLC, the Denver-based firm that represents three of the wounded bystanders — Bailey Alexander, Willis Small IV and Yekalo Weldehiwet — is even more blunt. "DA McCann must ensure this case does not follow the pattern of grand jury investigations being used to exonerate and legitimize officer misconduct," it says. "Denver’s officers must be indicted and tried for their extremely reckless acts of violence."

As noted by Commander Matt Clark of the DPD's major crimes division during a July 20 press conference, officers in the area of the Larimer Beer Hall, 2012 Larimer Street, noticed an altercation between an unarmed man and Waddy, who appeared to have a weapon, at around 1:30 a.m. on July 17, during the period known as let-out. Clark said the cops flickered their flashlights and announced their presence in an attempt to calm the situation. At that point, Waddy allegedly walked through a crowd gathered around a food truck, and when he passed between the far end of the vehicle and a parked car, he was ordered to stop. "He was clearly away from the crowd, and the street was closed due to the out-crowd, so no traffic was in jeopardy," Clark stressed. 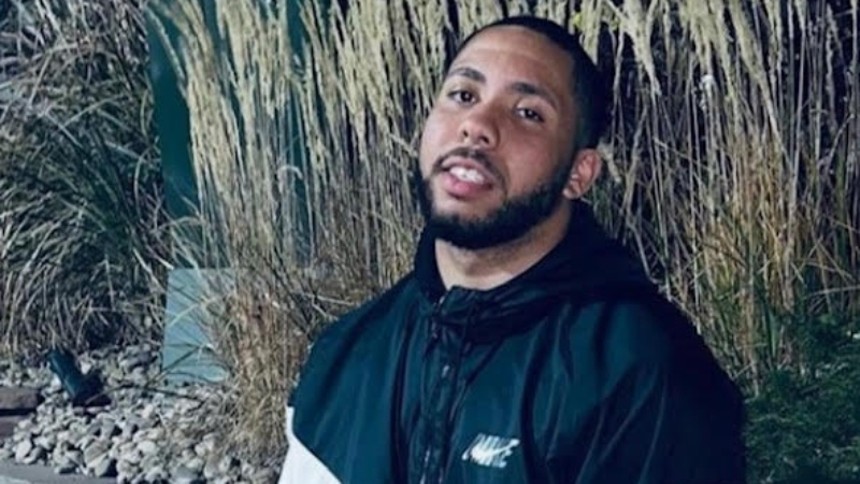 A portrait of Jordan Waddy.
Tyrone Glover Law
Instead of complying with orders, Clark continued, Waddy tried to remove a handgun from the hoodie he was wearing, and while he was holding the weapon by the slide rather than in a pistol grip when he finally managed to extract it, the muzzle crossed in front of two officers, prompting them to begin firing. One shot two rounds, the other four, and Clark maintained that because Waddy's backdrop was the Larimer Beer Hall itself, no one else was in their line of fire. That wasn't true for a third officer, who shot a single round from another angle, but Clark said that he was careful to make sure the sight path to the suspect was clear.

Waddy was subsequently charged with three counts of weapon possession by a previous offender and one count of third-degree assault.

Glover's account of what happened, based on the videos, is very different from Clark's. "You can see that Mr. Waddy throws a firearm off to the side," he says. "It's roughly eight feet away from him. He puts his hands up and then he's shot by officers — shot four times by one officer. And other officers are shooting into a crowd of bystanders. There are literally people jumping back over a patio fence to get away from the officers' fire. The officers shoot from each side, but they're shooting back toward a group of people all standing by a food truck — and they're continuing to shoot as Mr. Waddy is falling down."

Here's the video compilation assembled by Glover:
As required by HB-217, the 2020 police-reform bill signed in the wake of the George Floyd protests in downtown Denver, the DPD released eight raw, unedited videos from HALO cameras and body-worn devices. (Click here to see them.)

In a statement, McCann explained her reasoning for putting the incident before a grand jury. "The public’s interest in this particular shooting incident is understandably high," she pointed out. "For the community to trust in the outcome from this incident, it is important that independent members of the community review the facts, evidence and law regarding whether these officers should be criminally charged. Until the grand jury’s work is complete, my office will have no further comment on this matter."

Glover is not as reticent. "We've seen what happens when stuff gets sent to grand juries," he notes. "The old saying is, 'A grand jury would indict a ham sandwich.' But we've seen that not happen in cases all the way back to Michael Brown," who was shot in 2014 by a Ferguson, Missouri, police officer a grand jury declined to indict — a decision that prompted widespread rioting. As a result, Glover concedes, "I'm not holding my breath."

Glover doesn't go into detail about the injuries sustained by Waddy. But bystander Weldehiwet was shot in the arm amid the chaotic scene, and the bullet did tremendous damage, as seen in the photos below. A surgical image and an X-ray show the damage inflicted on Yekalo Weldehiwet, an innocent bystander shot by police on July 17.
Courtesy of Rathod Mohamedbhai LLC
That Weldehiwet, Alexander and Small have secured legal representation indicates the likelihood of them pressing lawsuits against the City and County of Denver  — and Glover is even more definitive about a complaint on Waddy's behalf.

"I think it's a foregone conclusion that's the route we're going to go, after seeing the body cams," he says. "It's just a matter of when we decide to do it. We want to assess his injuries, and we may want to do a full reconstruction of what happened using experts. But it's my plan to get something out as soon as it's practical."

In addition to releasing the videos from the scene, the Denver Police Department issued what it terms a "critical-incident briefing" about the 20th and Larimer shooting, delivered by Commander Matt Clark. His account sticks with the basic outline of the narrative from the July 20 press conference, and while video of Waddy throwing his gun to his side is included, Clark doesn't mention that fact, instead focusing on the muzzle crossing in front of the officers before he discards the firearm.

See the critical-incident briefing below: