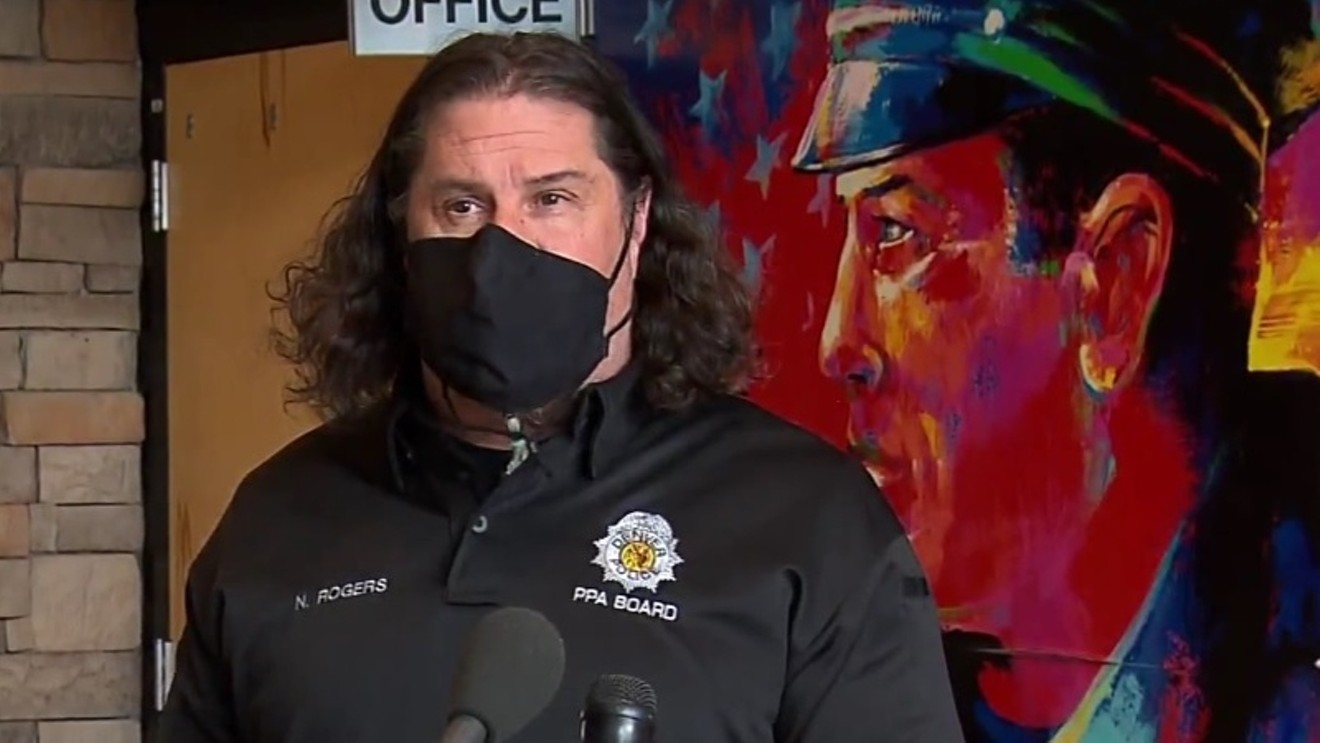 The Denver Police Protective Association's Nick Rogers at a March 28 press event. CBS4 Denver
On March 25, a jury awarded $14 million to twelve plaintiffs represented by the ACLU of Colorado, who'd sued the city over the Denver Police Department's actions during the George Floyd protests that shook downtown starting in late May 2020. But the Denver Police Protective Association hasn't exactly endorsed the verdict. On March 28, DPPA president Nick Rogers released a statement essentially suggesting that the cops should be celebrated for preventing an apocalypse rather than castigated for using force far more excessive than jurors considered necessary.

The Denver Justice Project is delivering the opposite message, however. In a March 29 announcement, the organization is calling for DPD officers to carry liability insurance in light of the millions that Denver has paid out over the years to settle police brutality claims — a subject that Alexander Landau, the organization's director of community relations and a member of the Reimagining Policing and Public Safety Community Task Force, knows all too well. In 2011, Landau was awarded $795,000 over an incident two years earlier during which he was beaten bloody after being pulled over by cops for what they saw as an illegal left turn.

What the ACLU of Colorado characterized as "the first trial in the nation on behalf of protesters injured by police during George Floyd protests" ended after nearly three weeks with a sweeping repudiation of DPD tactics during the 2020 rallies. The Denver Department of Public Safety's response to the verdict focuses on lessons learned. It reads:


The Denver protests in the aftermath of George Floyd’s murder were unprecedented — the city had never seen that level of sustained violence and destruction before. We were prepared for a worst-case scenario, but we weren’t fully prepared for what transpired. Unfortunately, Denver Police Department officers and other law enforcement officers responding to assist encountered extreme destructive behavior from some agitators among largely peaceful protestors. We recognize that some mistakes were made.

Well before the trial and beginning in 2021, the Department of Safety and the DPD reflected on how we fell short, where we could improve, and how we can better support our community moving forward. Based upon what we have learned, we have made specific changes to how the Police Department will respond if protests erupt in violence in the future, and those changes were being implemented prior to any litigation. Those changes include:

• We eliminated the use of 40 mm less lethal equipment for purposes of crowd control.

• We have changed the way officers are permitted to use pepper balls for purposes of crowd management.

We continue to evaluate our policies and training to ensure we are using best practices identified by law enforcement throughout the country to better protect peaceful protestors while addressing those who are only there to engage in violence. We recognize that there is more work to be done, and the Denver Police Department will continue collaboration with the communities we serve on that work.

No such nuance is evident in the Denver Police Protective Association's take on the jury's findings. At a March 28 gathering that was characterized as a press conference even though no questions were answered, Rogers offered this:


In response to Friday's $14M federal jury decision, the men and women of the Denver Police Protective Association would like to say we were there on the front lines. We witnessed the chaos, destruction and abhorrent criminal behavior of this rampage. We were targeted and we also cannot forget over 70 of our officers were injured because of this violence. If the men and women of the Denver Police Department had not held the line for those five days, there would not be a downtown Denver. Buildings and businesses would have been destroyed and there would not have been anything to return to. Business owners, and citizens alike, are grateful we held the line and did not have experiences as other cities throughout the country. The Denver Police Department acted with nothing less than honor, integrity, courage, bravery and unwavering commitment to stand there and push back those who engaged in anarchy.

As for the Denver Justice Project, its release points out that "over the years, the amount of Denver taxpayer dollars that has gone towards settling cases of violence towards the community by police, is intentionally untrackable. Settlements and verdict payouts do not keep us safer. They do not create a deterrent to violent policing. They do not build healthy community relationships. They do not hold police or law enforcement agencies accountable." 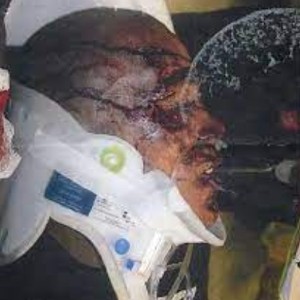 Alexander Landau after being beaten bloody by Denver police officers in 2009.
thenationreport.org
Denver taxpayers "continue to foot the bill for police abuse payouts and settlements," the release notes, suggesting that "personal liability insurance would create an additional level of financial responsibility when dealing with law-enforcement violence. We as a community should no longer be forced to foot the bill for violent police officers."

Senate Bill 217, passed in 2020, discontinued qualified immunity for police officers, "meaning they could be personally held liable...up to $25,000," the Denver Justice Project says. Moreover, companies such as Xinsurance, Travelers and pgui all offer policies specifically tailored for police officers.

Officers who carry personal liability insurance "remove the burden of compensation for violence from Denver taxpayers and place it on the individual officers responsible. These are monetary amounts that could be paid out in other ways saving taxpayer dollars for other equitable city essentials....and ensure a level of protection over our taxpayer dollars when it comes to police abuse cases. Currently Denver is on track to award over $30 million paying out cases related to law enforcement violence in a ten-year period."

Over time, the DJP release concludes, the policy could also "filter out officers who are too problematic to be insured, which makes us as a community safer and removes officers from the department who are a liability."
KEEP WESTWORD FREE... Since we started Westword, it has been defined as the free, independent voice of Denver, and we'd like to keep it that way. With local media under siege, it's more important than ever for us to rally support behind funding our local journalism. You can help by participating in our "I Support" program, allowing us to keep offering readers access to our incisive coverage of local news, food and culture with no paywalls.
Make a one-time donation today for as little as $1.