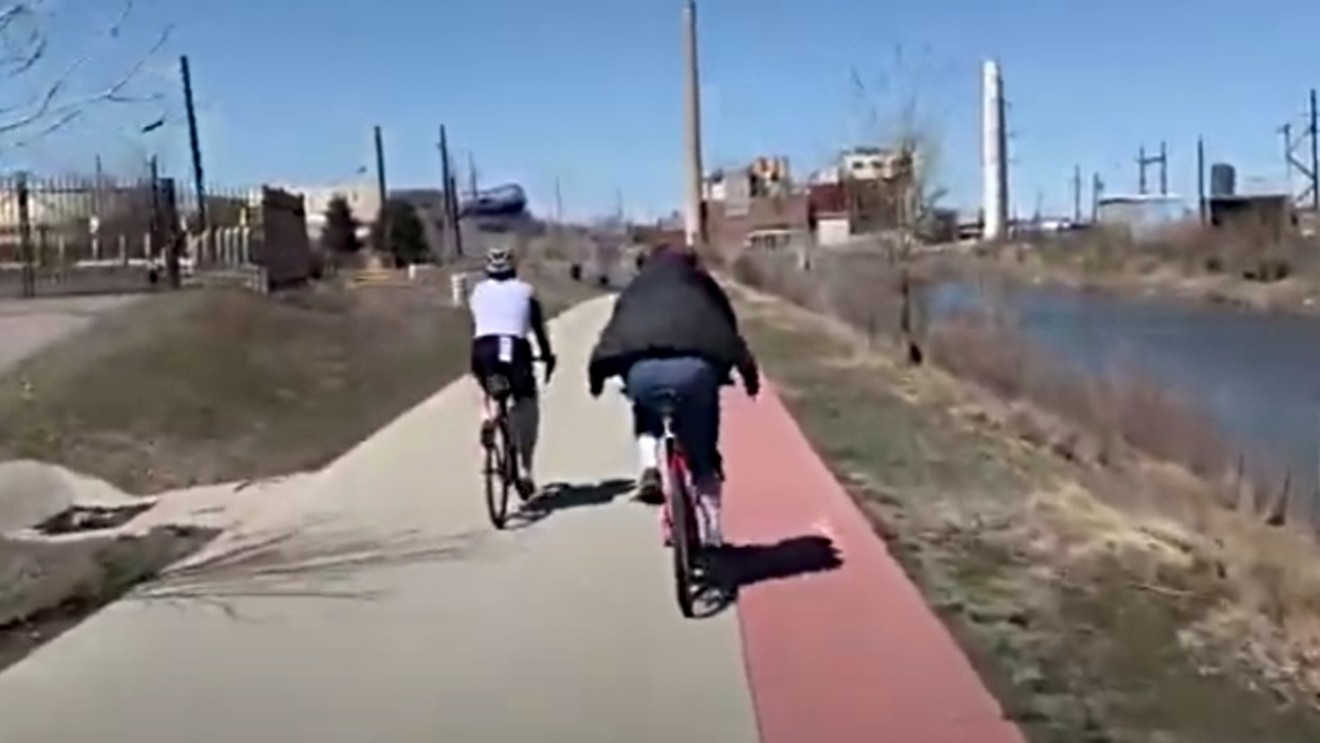 YouTube
Update below: Irony alert — a new study from Lemonade Insurance naming Denver one of the ten safest U.S. cities for bike commuters is being released today, May 18, only hours before the Ride and Walk of Silence, an event sponsored by Denver Streets Partnership that will memorialize cyclists and others killed in traffic-related incidents across the city.

The number of such fatal accidents has grown alarmingly: The 84 traffic deaths recorded in Denver in  2021 were the most since the city's 2016 launch of Vision Zero, a five-year action plan committed to "eliminating traffic deaths and serious injuries by making our roadways safer for everyone" by 2030. In fact,
last year's total was the highest in at least a decade — double the 42 fatalities in 2010 — and included four incidents involving bicycles.

Joshua Lawson died after crashing into a fixed object near West Evans Avenue and South Acoma Street on July 22, 2021. Robert McCullough lost his life under similar circumstances on the 3900 block of West Tenth Avenue on September 5. David Merritt was killed after a collision with a car near the intersection of Court Place and West Colfax Avenue on September 14. And Roger Grahf perished after being struck by a train along the 700 block of West Bayaud Avenue on October 29.

"The Safest Cities for Bike Commuters," the Lemonade study, is topped by Fort Collins and lists Denver in ninth place. But it's significantly flawed, as evidenced by the reasons it lists for the Mile High City's elevated ranking, which suggest that the authors of the report think Denver and Boulder are essentially the same place.


• Denver’s US 36 Bikeway is what puts this city on the map when it comes to commuters who prefer to travel to work on two wheels. The 18-mile route is 12-feet wide, and allows commuters to comfortably cruise within the Denver metropolitan area.

• Denver cyclists who bike to the train, bus, or light rail can safely lock-up their bikes at "Bike-N-Ride" shelters at RTD stations.

• For those who prefer an electric bike from time to time, Denver (and Boulder) also has a robust electric bike rental program called Boulder BCycle.

Jill Locantore, Denver Streets Partnerships' executive director, points out these incongruities, noting that they don't "seem that relevant to the City and County of Denver proper. The US 36 Bikeway is outside of the city limits, and obviously Boulder BCycle doesn't serve Denver, either. And while the Bike-N-Ride shelters at RTD stations are great for preventing bike theft, they don't have any bearing on the safety of biking to or from the stations."

Overall, Locantore says, "Denver has made good progress on building out more miles of bike lanes in the past few years. But relatively few of these bike facilities are fully protected bike lanes with vertical separation between bicyclists and vehicular traffic." Notable exceptions include "13th Avenue between downtown and Sun Valley, 23rd Avenue between downtown and Jefferson Park, and Marion Parkway between Bayaud and Washington Park." And most of the new lanes aren't "located on Denver's high-injury network, where the preponderance of traffic fatalities occur," she adds.

The Ride and Walk of Silence, which gets underway at 5:30 p.m. at Rude Park, 2855 West Holden Place, will underscore this point, among others. Participants can either take part in a thirty-minute bike ride, or walk to remember those who died, and victims' names will be read aloud at the gathering.

"We will be releasing our Vision Zero Call to Action, which focuses attention on the fact that most of the streets on the high-injury network are both state highways and major transit corridors, and the need for the city, RTD and CDOT [the Colorado Department of Transportation] to work closely together to transform these corridors from deadly highways into safe, multimodal, people-friendly main streets," Locantore says. "In particular, we believe that a significant investment in transit improvements — both infrastructure and service levels — on these corridors will be essential for making the streets truly safe for everyone, including people on bikes!"

No matter how safe cycling in Denver currently is — or isn't.

Click for more information about the Ride and Walk of Silence.

Update: After the publication of this post, Natalie Gerke, a representative of Lemonade Insurance, reached out with some clarifications about "The Safest Cities for Bike Commuters" study. She stressed that the researchers behind the report do indeed understand that Denver and Boulder are different places — and to further underscore this point, the section pertaining to Denver was reworked. It appears below in its entirety. Gerke adds that the anecdotal information about each city wasn't used to determine each city's overall ranking. Instead, a common methodology was employed. It's on view below as well.

Colorado is a haven for outdoors enthusiasts, especially bikers. Denver and the surrounding areas have prioritized paths for bikers, especially those commuters within the area or into Denver with the US 36 Bikeway.

Organizations like Bicycle Colorado have created a community of both new and veteran cyclists who prefer to commute on two wheels in the Denver area. Their dedicated active bike corridors throughout the metro area bring like-minded bikers together to share the ride.

Denver cyclists who bike to the train, bus, or light rail with the RTD can easily access details on how to travel safely with their bike.

In order to determine the safest cities for bike commuters, Lemonade accumulated data across five categories to provide a Bike Safety Score:

Bicyclist fatality rate per 10K people who bike to work (30 points): League of American Cyclists “Bicycling and Walking in the US — Benchmarking Report”; page 321

Miles of protected and buffered bike lanes (35 points): League of American Cyclists “Bicycling and Walking in the US — Benchmarking Report”; page 351-352

Lemonade theft claims per total exposure in a market (10 points): Lemonade proprietary claims data; for markets where Lemonade is not available, we found the median rate and applied to roughly 15 markets

State laws that promote biker and pedestrian safety (5 points; 2.5 points per law present) — (a) Motorist Must Give 3+ Feet When Passing Bicyclist (b) Driver’s Test Incl. Questions about Responsibilities Towards Bikers: League of American Cyclists “Bicycling and Walking in the US – Benchmarking Report”; page 262

Each metric was weighted as listed above for the cities included, totaling to a 100-point scale, with a score of 100 representing the most favorable conditions for bike commuters. Finally, we determined each city’s weighted score across all metrics to calculate the bike safety score and used the resulting scores to rank-order states.

Click to read the complete report.
KEEP WESTWORD FREE... Since we started Westword, it has been defined as the free, independent voice of Denver, and we'd like to keep it that way. With local media under siege, it's more important than ever for us to rally support behind funding our local journalism. You can help by participating in our "I Support" program, allowing us to keep offering readers access to our incisive coverage of local news, food and culture with no paywalls.
Make a one-time donation today for as little as $1.