Forty Years Ago, Xeriscaping Started Changing the Landscape of Denver

Scott Dressel-Martin, Courtesy of Denver Botanic Gardens
Liz Gardener remembers how some people worried that a new water-saving landscaping concept could alter Denver’s image as the Emerald City of the Plains. “We have to keep it green,” they warned.

The concept "is green," replied Gardener, a former Denver Water conservation officer who so enjoyed gardening that she'd changed her name to reflect that passion. "But it's also red and yellow and purple."

Spurred by the droughts of the late 1970s, a task force led by Denver Water employees had set out to create a new kind of gardening, one that would counteract the effects of a growing population on Denver’s water supply.  One novel idea was a landscaping technique that prioritizes water conservation.

In 1981, Denver Water adopted the concept and named it "xeriscape landscaping," or xeriscaping.


“Nancy [Leavitt] came up with the term,” Gardener recalls. “She had a background in botany and biology, and she knew about xeros.” The Greek word means "dry," and Leavitt thought to combine it with "scape." But others immediately said, “People are going to hate that word,” she remembers. They worried that “xeri,” similar to "zero" in pronunciation, would be equated only with rocks and cacti — gardens that didn’t need water at all.

People don’t always see the connection between water supply and water demand, Gardener continues. And they often have different perceptions of what makes a beautiful garden — especially if they previously lived in lush places that receive more than Denver's 14.5 inches of rain a year.

But over the past forty years, xeriscaping has inspired a cultural shift in Colorado. The practice has become part of the city's ecosystem, enshrined in ordinances and included in planning documents, and can be credited with helping decrease Denver water usage even as the city's population has exploded over the past four decades.

Liz Gardener practices xeriscape at her own home.
Liz Gardener
Xeriscape was not an easy sell in the early days, however, and its confusing name was only part of the problem.

Many people come to Denver because of the mountains, deserts and prairies, but they still garden like they live in Maryland or Indiana, explains Panayoti Kelaidis, senior curator and director of outreach at the Denver Botanic Gardens. "That’s a habit of force."

Xeriscape has served as “a powerful teaching methodology,” says Kelaidis. It illustrates how thoughtful planning can conserve water, which leads to conversations about where the water comes from and why it's important to be prudent with its use.

The seven principles of xeriscape take into consideration how a garden might most efficiently use water. For example, families may choose to keep a portion of their yard covered in grass. But they can plan to irrigate the lawn so that runoff water hydrates other plants instead of trickling into the street. They can also plant flowers, shrubs and trees that need less water to begin with.

“[Xeriscape] is a doorway to intelligent gardening,” Kelaidis continues. “In a lot of traditional landscapes, the plants are on life support. If you cut that life support, you’re going to lose the plants. Using xeriscape is like living a healthy life.”

Along with Denver Water, the Denver Botanic Gardens, Colorado State University and the Associated Landscape Contractors of Colorado have worked to get the principles of xeriscape out through books, seminars, demonstration gardens and plant cultivation.

“It’s basically just good horticultural principles,” explains James Klett, a landscape horticulturist and CSU professor. "Xeriscape has spread throughout the Rocky Mountain region and into the western states. Some states may put a different name to it, but it has spread a long way." Those names range from "water-wise" to "drought-resistant gardening," but the practice all started with xeriscaping.

Xeriscaping at the Denver Botanic Gardens.
Scott Dressel-Martin, Courtesy of Denver Botanic Gardens
The Denver Botanic Gardens has one of a number of demonstration gardens meant to connect these concepts and create a blueprint for ways to garden beautifully yet consciously. When people first enter the grounds, the plants and design reflect European and coastal environments, but farther down the pathways are more native and drought-tolerant gardens. “People end up saying, ‘Hey, these are beautiful, too,’” says Kelaidis.

But a sizable portion of those native plants weren’t available when xeriscaping principles were first adopted forty years ago. “Many of these plants were out there, but they’re kind of rangy and look a little scruffy,” Kelaidis explains.

So Kelaidis personally brought back native plants such as “red birds in a tree” and a hardy form of Arizona cypress from Cookes Peak, New Mexico, as well as the Pawnee Buttes sand cherry that grows northeast of Denver. He also traveled to similar semi-arid and steppe regions around the world, such as South Africa, where he found the “ice plant.” Kelaidis explains that while some believe in only cultivating native species, there are many garden flowers that originated in steppe regions, including lilacs, bearded irises, peonies and the Persian rose.

Kelaidis and others at the DBG also teamed up with CSU, as well as local nurseries, garden centers and gardening professionals, to create Plant Select in 1997. The nonprofit helps to educate gardeners and sell and distribute plants that grow well in high plains and intermountain regions. In addition to finding species with beautiful blooms and textures, Plant Select cultivates plants that can better handle fluctuations in temperature, lack of water and different kinds of soil; many are also more pest-resistant.

“Water is a valuable commodity these days, and it’s getting more and more expensive."

According to Plant Select's Demonstration Garden Survey Summary in 2020, seven of its 24 gardens were watered three times a week, seven were watered bi-weekly, and seven were watered once a week. “They’re always coming out with new native varieties, with a new list of plants that are adaptable to the Colorado environment,” says Phil Steinhauer, president of the Associated Landscape Contractors of Colorado board of directors. “They’re marketing it so that people are asking for it.”

“The day will come when the word 'xeriscaping' will no longer be an issue,” Kelaidis says. "It will no longer have to be a novelty. It will just be landscaping. Then we’ll quit fighting over the term.”

The importance of cutting back on water use will help hasten the adoption of xeriscaping, advocates say. While Denver Water can’t easily provide a historical comparison of water rates back to 1980, rates have increased by a range of 1.5 to 3.8 percent per year over the past six years.

The forty-year anniversary of xeriscaping also coincides with the United Nations’ most recent Intergovernmental Panel on Climate Change report. Released last month, it predicts increased effects from climate change. Colorado is expected to experience more frequent droughts, heat waves and wildfires. While Denver is not experiencing drought conditions so far this year, the Western Slope is, and nearby states are grappling with restrictions on Colorado River water usage for the first time.

“Water is a valuable commodity these days, and it’s getting more and more expensive,” Steinhauer notes. “It’s important to homeowners when they’re investing in their landscape.” 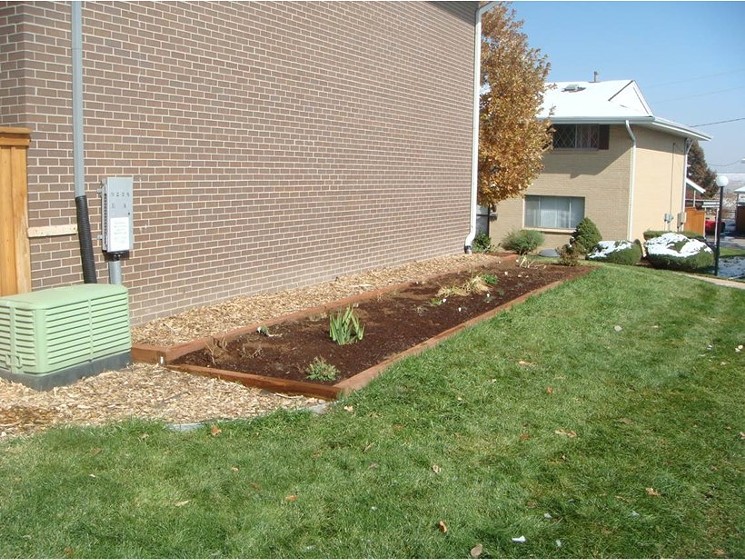 Before renovations, Cherry Creek 3 maintained landscaping from the 1960s.
Don Ireland
Cost is what inspired Don Ireland and his homeowners' association, Cherry Creek 3, to take on a $125,000 xeriscape remodel project. In fiscal year 2008-2009, water and sewer bills were 42 percent of the HOA's annual costs. The association had spent $85,777 on water and sewage and used 36 million gallons of water.

Before studying those bills, Ireland says, he wasn’t fully aware of the scarcity of water along the Front Range. He’d noticed a difference in rainfall when he'd moved west from his native Pittsburgh, but the water bill propelled him into hours of internet research. The HOA’s first project was to upgrade its 1960s-era toilets to low-flush models.

Then the HOA moved on to landscaping. “As a board, we decided we wanted to change some of our landscaping for three reasons: to beautify our fifty-year-old neighborhood, bolster property values and save money on water,” Ireland says.

The landscape had been dominated by Kentucky bluegrass. Sourcing their plants from Plant Select, HOA members transformed the property. Instead of basic green, there's now golden rudbeckia, orange day lilies and purple echinacea that attract butterflies, birds and bees. While they kept some of their green lawn, they changed their sprinklers to be more efficient and respond to the weather.

“I’m just your plain, average Don next door,” Ireland says. “My message is really simple: If I can do it, you can, too. I’m not somebody special. You can, too." While the Front Range isn't feeling the stark reality of drought yet, "they’re feeling it everywhere to the west," he notes.

“The quick, whimsical way to say it: Baby, it’s time to kiss your grass goodbye,” he adds.

Kelaidis credits people like Ireland and his fellow HOA members with pushing the xeriscape movement. “If they do it well,” he says, “I think they’re helping to make it more of a bread-and-butter” approach to gardening. 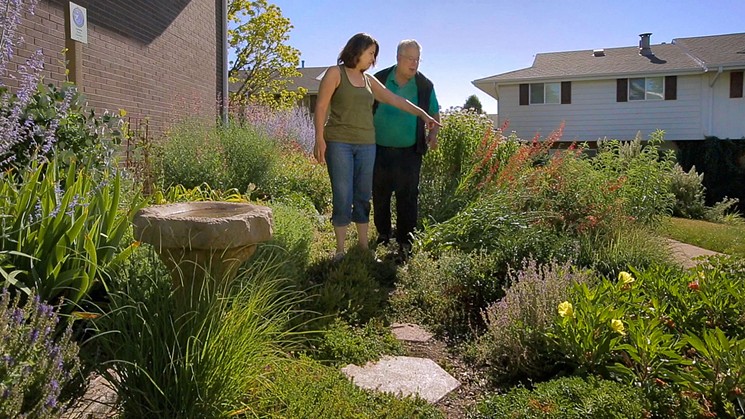 Lynn and Don Ireland among the xeriscaping done by Cherry Creek 3.
Courtesy of HaveyPro Cinema
The more water-wise gardening there is, the more xeriscaping becomes normal — which is exactly what proponents hoped for when they coined the concept forty years ago.

Still, there is work to be done. Xeriscaping gets a boost every time there is a drought cycle, such as the years from 1999 to 2003. But afterward, the demand recedes.

To encourage more xeriscaping, Denver Water offers rebates for efficient outdoor irrigation systems and sprinkler nozzles. In partnership with Resource Central, it also provides Garden in a Box kits filled with low-water plants. Thanks in part to such efforts, despite Denver's population nearly doubling since 1980, five-year water-use averages have decreased from approximately 70,000 million gallons from 1976 to 1980 to 66,000 million gallons from 2016 to 2020.

“I wish there were more and more people interested in saving water outdoors,” Gardener says. “We each have a civic responsibility to use water wisely in a semi-arid climate.”

“In the long run, it’s good for the soul,” Kelaidis concludes. “It’s more like our natural setting. It attracts native insects, and it's much better for our environment. I think that’s our subtext. And I believe it’s an element of our mission — to make people really appreciate our natural landscapes and embrace it in their own homes.”
KEEP WESTWORD FREE... Since we started Westword, it has been defined as the free, independent voice of Denver, and we'd like to keep it that way. With local media under siege, it's more important than ever for us to rally support behind funding our local journalism. You can help by participating in our "I Support" program, allowing us to keep offering readers access to our incisive coverage of local news, food and culture with no paywalls.
Make a one-time donation today for as little as $1.
Claire Duncombe is a journalist, photographer, multimedia storyteller and musician. She is a recent graduate of CU Denver, and a proud Philadelphia native.
Contact: Claire Duncombe