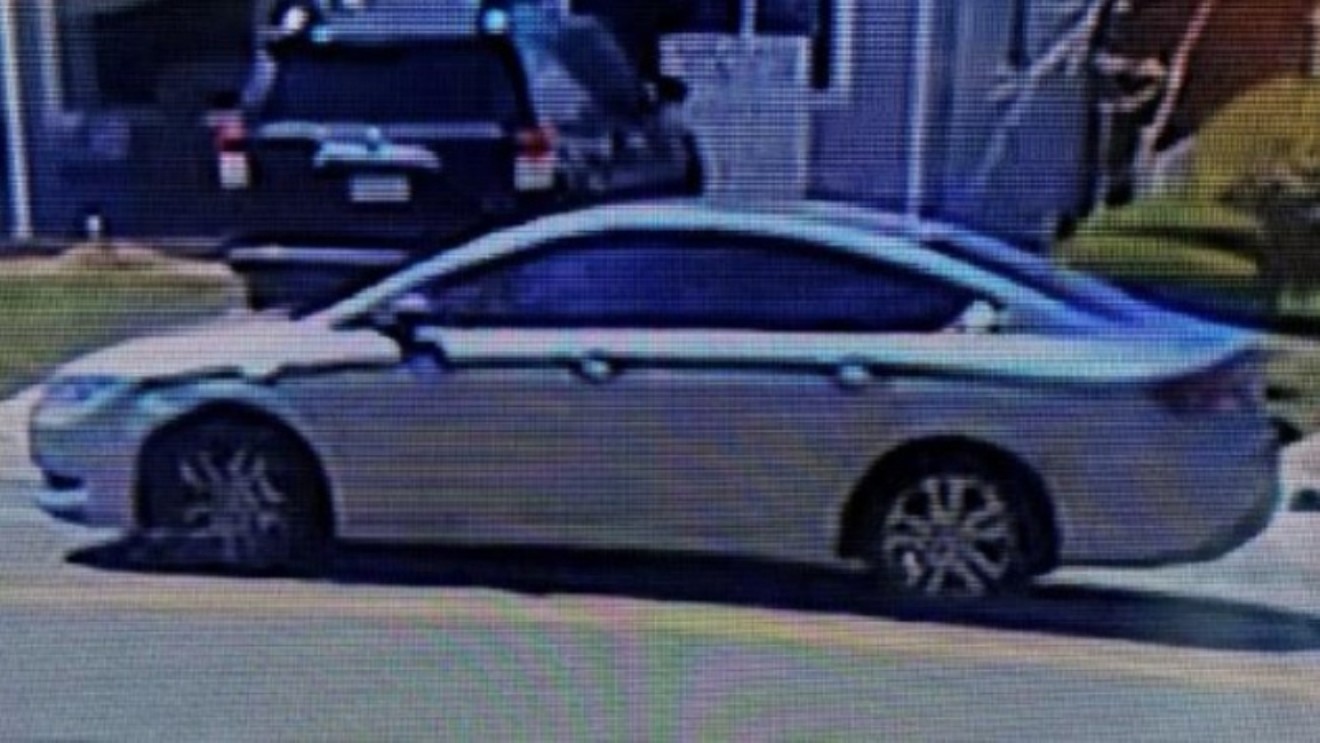 A silver Chrysler 200 like this one was key to the apprehension of a suspect in a May 6 shooting near 3rd and Broadway. Metro Denver Crime Stoppers
It was another weekend of gun violence in the Mile High City, with at least five shootings between Friday, May 6, and Sunday, May 8. Two happened at high-profile locations, including a fatal daylight gundown near Third and Broadway for which a suspect is in custody; another went down in an area that the Denver Police Department has yet to divulge.

The DPD tweeted about the first incident at 1:21 p.m. on May 6, noting that Denver police officers were investigating a shooting at the 300 block of Broadway. The DPD staged an update about the incident shortly before 3 p.m., when a Broadway closure was still in effect; an announcement that the route had reopened was shared a little over four hours later. Here's the video:


WATCH: DPD provides update on homicide/shooting in the 300 block of North Broadway. https://t.co/tqzw6ss4Ei

The major revelations were a description of the vehicle — a silver Chrysler 200 with the Colorado license plate ALOi76 — and word that a female driver was believed to be behind the wheel.

A man was reportedly killed in the incident, while a woman was injured. They were believed to be customers at an Enterprise rental car branch.

At 9:42 a.m. on May 7, the DPD said that thirty-year-old Derron Harris was being held on suspicion of first-degree murder in connection with the shooting; the department added that the female driver, as well as the car, had been found. The driver wasn't immediately charged, but police stressed that the investigation was "ongoing." The male victim has not yet been identified.

The shootings continued on May 6; at 10:04 p.m. that night, Denver police noted one in the area of South Raritan Street and West Alameda Avenue, in the Valverde neighborhood. An adult male was transported to an area hospital with injuries deemed serious.

At 2:01 p.m. on May 7, the DPD told of a shooting in the area around East 29th Avenue and Colorado Boulevard in North Park Hill. The wounds suffered by two victims weren't considered life-threatening.

At 2:29 a.m. on May 8, the Union Station area, a focus of DPD enforcement since late 2021, saw a shooting on the 1600 block of Wazee Street. Two adult males were hit and suffered serious injuries.

Finally, at 10:17 p.m. on May 8, the DPD stated that a shooting victim had been transported to a hospital by a private vehicle with "what appear to be non-life-threatening injuries." The tweet added that "officers are working to gather information about where this incident occurred."

Anyone with information about any of these incidents can contact Metro Denver Crime Stoppers at 720-913-STOP (7867).
KEEP WESTWORD FREE... Since we started Westword, it has been defined as the free, independent voice of Denver, and we'd like to keep it that way. With local media under siege, it's more important than ever for us to rally support behind funding our local journalism. You can help by participating in our "I Support" program, allowing us to keep offering readers access to our incisive coverage of local news, food and culture with no paywalls.
Make a one-time donation today for as little as $1.