Inside Dougco Court Hearing on How Superintendent Corey Wise Was Fired 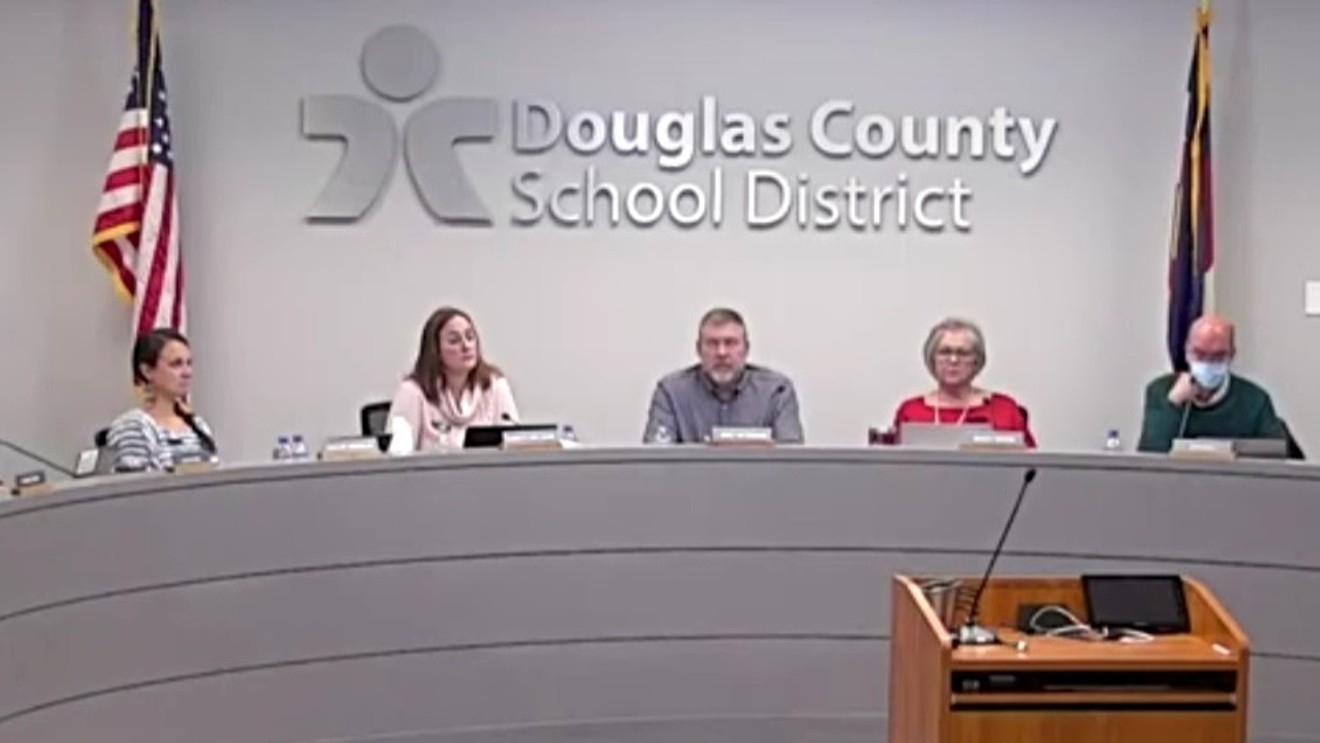 Robert C. Marshall, the Douglas County resident behind the lawsuit that led to the motion, feels that the hearing went well overall, but he stops well short of predicting victory. As he acknowledges, the specifics of the complaint, which pertain to both the letter and the spirit of Colorado open-meetings law, is a new issue before Colorado courts.

The suit, which is being handled on Marshall's behalf by a legal team that includes Colorado Freedom of Information Coalition attorney Steve Zansberg, points out that the state's open-meetings law "requires that any time three members of a 'local public body' like the BOE [Board of Education] plan to discuss public business 'in person, electronically, or by [any] other means of communication, they must notify the public in advance and allow the public to observe that discussion in real time."

The case contends that Peterson and his colleagues tried to get around this dictate while engineering Wise's ouster by taking part in a series of two-at-a-time get-togethers that Marshall refers to as daisy-chaining: Director A meets with Director B, who then meets with Director C, who meets with Director D. The plaintiffs contend that such efforts qualify as "bad-faith circumvention" of the law's requirements in a way that the Colorado Supreme Court has forbidden.

The motion for a preliminary injunction in the case argues that "deliberately convening such 'less than a quorum' meetings in seriatim — a process that has derisively been referred to by other courts as a 'walking quorum' or 'constructive quorum' — purposefully to evade the requirements of public notice and transparency that is the hallmark of open meetings, is an affront to the spirit of the law, and to common sense."

According to Marshall, attorneys for Hall & Evans LLC, a private law firm hired by DCSD to represent the board, attempted to establish that boardmembers have regularly met in groups of two without notifying the public in advance — and that includes Elizabeth Hanson, Susan Meek and David Ray, the three members not named in the suit. This set up an odd dynamic, putting the board's lawyers in the presumptive position of calling some members on the carpet to justify the actions of colleagues whose choice to fire Wise they opposed. For example, Meek took the stand during the hearing to emphasize that while she did indeed have conversations with other boardmembers outside of meetings, she never engaged in any inappropriate conduct related to open-meetings law.

Judge Holmes asked Marshall's attorneys whether these gatherings were proper; they argued that there was no evidence to the contrary. He also put a pair of questions to the defense counsel that struck Marshall as indicating he understood the issues very well. The first was about whether daisy-chaining would be a violation of Colorado Open Meetings law; the second involved whether a decision limiting daisy-chaining could be written narrowly enough to prevent the sort of chaos that the board's advocates predicted should Marshall win the day.

During the hearing, the Peterson bloc insisted that they hadn't given Wise a quit-or-be-fired ultimatum when they spoke to him in advance of his February 4 dismissal. Instead, they said, they talked about giving him four options: he could resign, retire, be terminated for cause or be terminated unilaterally.

Even if the preliminary injunction is granted, it likely won't slow the already launched process to hire a replacement for Wise — something that could happen as soon as March 22. But no matter the motion's fate, the lawsuit will remain pending.

Click to read Robert C. Marshall v. Douglas County School Board, et al., and the motion for a preliminary injunction, as well as the Douglas County School District motion to dismiss the lawsuit, and the DCSD response to the preliminary-injunction motion.
KEEP WESTWORD FREE... Since we started Westword, it has been defined as the free, independent voice of Denver, and we'd like to keep it that way. With local media under siege, it's more important than ever for us to rally support behind funding our local journalism. You can help by participating in our "I Support" program, allowing us to keep offering readers access to our incisive coverage of local news, food and culture with no paywalls.
Make a one-time donation today for as little as $1.