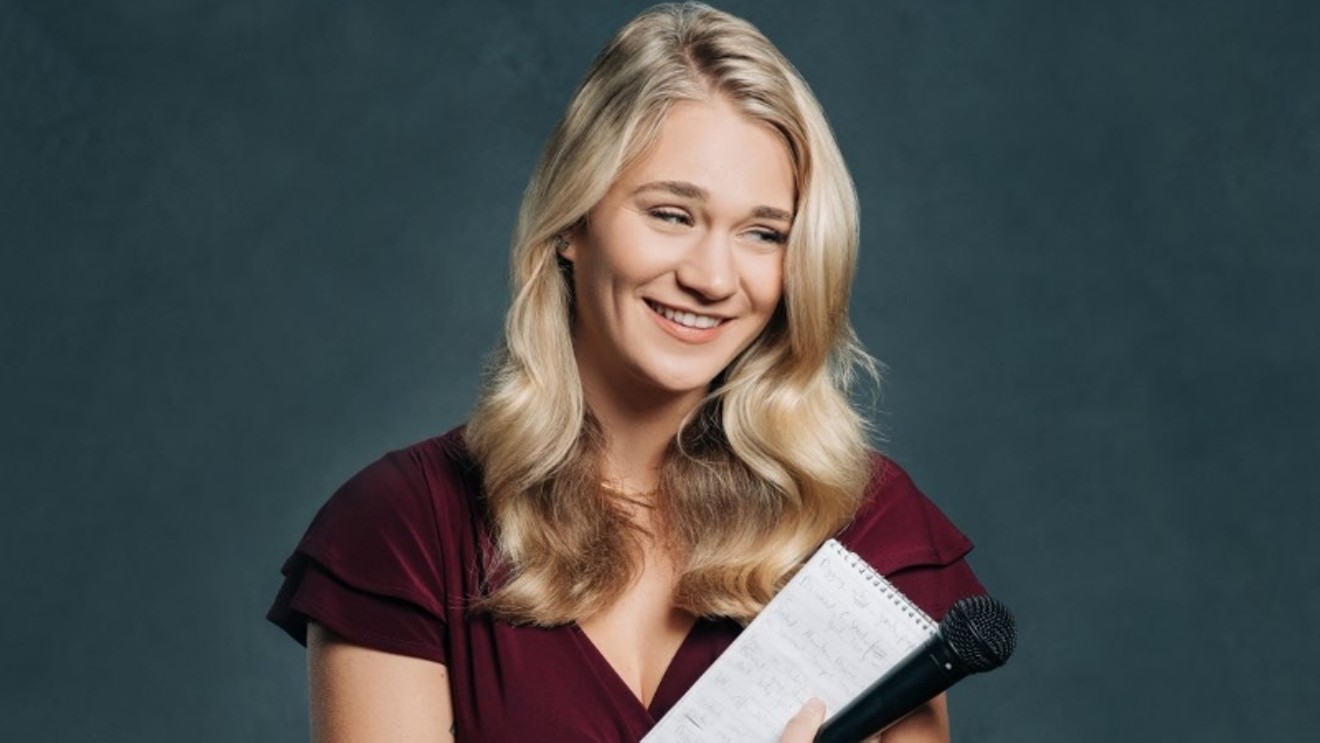 A portrait of Aimee Lewis. Photo by Sam Interrante
In late May, Westword published "Why Fourteen Fox31/Channel 2 Stars Have Left the Stations Since Last Year" — but it turns out that our math was wrong. Amid the myriad exits, we missed Aimee Lewis, a Fox31 reporter from August 2020 to the end of October 2021.

Today, Lewis is a digital marketing specialist for Winter Park Resort. She's also the creator of Live at Five, a fascinating podcast that serves as a devastating takedown of local TV news and reveals how and why her dream job turned into a nightmare.

"I can’t stop bad things from happening to good people," Lewis says at one point. "But I can stop advertising it."

Lewis declined an interview request from Westword — not surprising, given the prevalence of non-disclosure agreements in broadcasting — and Fox31 isn't mentioned by name in Live at Five. The podcast's criticisms of the medium, summarized in an excerpt shared here, are general, but no less powerful for their lack of specificity.

Since early 2021, Westword has conducted exit interviews with five Fox31/Channel 2 on-air stars, none of whom left in order to take a gig in another traditional newsroom: Natalie Tysdal, Sam Boik, Matt Makens, Kevin Torres and Michael Konopasek. This quintet represents only a third of those who left Fox31 and Channel 2 through the end of May; in addition to Lewis, also bidding farewell were Brooks Garner, Emily Allen, Aristea Brady, Meagan O'Halloran, Keagan Harsha, Deborah Takahara, Nick Griffith, Rachel Skytta and Taylor Brooks.

When speaking with Westword about the departures, Fox31 news director Brian Gregory framed them as part of a national trend that extends well beyond the TV news business. "You might have heard about it, post-COVID — some are calling it the 'Great Resignation,'" he noted. But he acknowledged that "our jobs as journalists are tough. And they are not remote. You come to the office to do your work. You get out in the community to report on stories. You cover intense situations, horrific crimes; you’re stuck out in adverse weather conditions for long hours. You work mornings, evenings, overnights, weekends, holidays. So this job can wear on you."

That was certainly true for Lewis. Her introduction to Live at Five, a five-part podcast launched last November that was supplemented in July by a sixth episode about a post-Fox31 waitressing gig in Fraser, reads: "Hungry and loyal, Aimee Lewis chased her lifelong dreams of becoming a local television news reporter, landing jobs in cities big and small across the United States. Determined to make a name for herself, Aimee climbed the TV ladder, all while ignoring the reality of what local TV news has become. This is the story of how a dream started and how a dream died."

Continue to read a section from Live at Five's fourth chapter, titled "That's a Wrap": 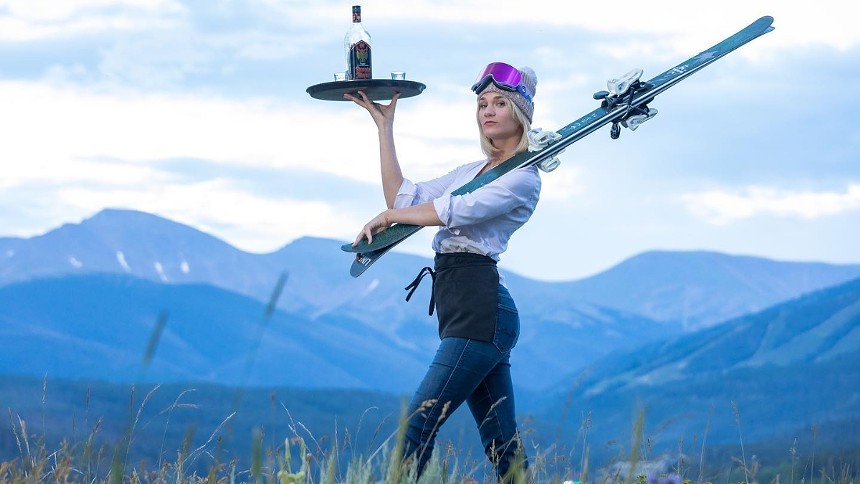 Aimee Lewis is now a digital marketing specialist with Winter Park.
Photo by Jon Geeslin
"The truth is, TV news doesn’t sparkle the way it once did. People don’t rush home to watch the four, five and six o'clock news anymore, because they don’t need to.

"News is constant. News is instant. News is where and when you need it, right now. There’s so much news that we can choose what we want to believe, and the internet makes sure we get more of that opinion.

"Just hear me out here. People say the news is fake. I’m here to tell you it’s not. We don’t sit in meetings figuring out how we are going to make a biased report to throw someone under the bus or make someone else rich. I promise you that much. It’s not that elaborate.

"But the problem is, most new is just simply unnecessary. When there’s a slow news day, we can’t just go home and play an extra commercial. We still have to fill time...which means we get the job of making something out of nothing.

"That’s where my problems lie. I don’t see the numbers, but it doesn’t take a genius to know TV isn’t rolling in it. So to make more money, stations have to add more shows...so they can run more commercials during those shows. But adding more news shows just means we, the reporters, have to find more news, even if there isn’t any. Or we have to turn in multiple stories a day to fill these shows. To save money, these reporters aren’t given photographers. So reporters do the job of two people, turning in two stories and not getting paid the overtime.

"It’s the definition of burnout…and this is happening across the country.

"Stay with me on this. Many people tell me they don’t watch the news anymore — it's too sad, too much doom and gloom — and claim they want the real news. They want to know the news that impacts them...or something happy.

"But in actuality, you don’t. You’d be lying to both me and yourself if you think you’d tune in to TV to hear about an apple festival you could attend, or when your food bank is offering giveaways. It’s not sexy.

"But death and destruction sure is...and you watch it. And they know you watch it, because you share it online, and that gives us article clicks we can throw more ads on.

"It’s human nature to be captivated by human suffering.

"Two thousand years ago In ancient Rome, thousands of fans would pack the Colosseum to watch the gladiators cut off the arms of their opponent, bleed, scream and fight until they were finished off by an animal or sword. The crowd would cheer and demand more bloodshed! The glory and gore was immensely popular throughout the Roman Empire and played a prominent role in urban life. Today we look at such acts and ask, 'How could people ever be so heartless and callous?'

"While obviously less extreme, news feeds off that same desire. The need to see violence to externalize the violence we feel inside.

"It's why you turn your head to watch a crying mother talk to reporters about the loss of their son who was gunned down on the street. It’s why you click on the link that shows body-camera footage of a cop abusing a woman.

"But when it’s your job to bring human suffering into the living rooms of your community — forced to pry into the worst of mankind, day after day — you start to crack. At least I did, and I’ll admit that.

"I’m tired of tracking down the parents of dead kids to ask them how sad they are so you can watch them cry at five o'clock.

"I can’t stop bad things from happening to good people. But I can stop advertising it.

"There are more factors, too. Reporters don’t get paid shit, we don’t have off most holidays and are almost always on call. Thousands of journalists make it work. But for me, it was time to walk away.

"I have no regrets. With the lows have been so many highs. I’ve genuinely helped people with problems. I’ve traveled to beautiful places, won awards, even went national.

"I can say I did it. I proved to twelve-year-old Aimee that dreams can come true. And standing here on the other side, I can tell her it’s so beautiful to feel immensely proud of yourself for doing the damn thing. Even if the dream itself disappoints.

"Many people ask me, what’s next? The truth is, I don’t know. News is all I’ve ever known. I feel like I’m finally leaving a long, toxic relationship...and now I have to figure out what’s actually good for me.

"Maybe I’ll find a more healthy way to keep people informed. Maybe I’ll go into PR. Or maybe I’ll take a break and a second to breathe. Put the phone on the hook and disappear for a while.

"I don’t have answers. But I do have my freedom...and a bucket list, with a hard-earned checkmark. I’ll never look back and ask, 'What if?' Because now I know.

"And as the great Billy Joel once said: 'You can get what you want, or you can just get old.'"

Click to access Aimee Lewis's Live at Five. Her Instagram account is @aimee_lewistv.
KEEP WESTWORD FREE... Since we started Westword, it has been defined as the free, independent voice of Denver, and we'd like to keep it that way. With local media under siege, it's more important than ever for us to rally support behind funding our local journalism. You can help by participating in our "I Support" program, allowing us to keep offering readers access to our incisive coverage of local news, food and culture with no paywalls.
Make a one-time donation today for as little as $1.