The plaza between Sonny Lawson Park and the Blair-Caldwell African American Research Library. Conor McCormick-Cavanagh
At her cafe located just a few blocks from Sonny Lawson Park, Fathima Dickerson often serves meals to some of the people who live on the streets.

"For me, living and working in Five Points, that library, that park, have always had a history of homelessness," says Dickerson, general manager of the Welton Street Cafe. The thirty-year-old restaurant at 2736 Welton Street is just up Welton from the Blair-Caldwell African American Research Library, which is located next to the park in the heart of Five Points.

But while homeless people have been hanging in the area for as long as Dickerson can remember, she's still concerned about the possibility that homeless service providers and city officials will put a forty-person safe camping site on the plaza between the library and park.

"This is a tourist location, so putting that type of camp site on our corridor, it kind of makes it less attractive for people to want to visit," she says. "Or they'll question, 'Why do they have these people camping here?' It’s hard, because the city is trying to put a camp in a historically black district. That is not something that works well for us. We’re trying to bring back life in Five Points, and this is what we get?"

Dickerson has joined other neighbors and the Five Points Business Improvement District in opposing the establishment of the city's first safe camping site in the area.

Since April, homeless service providers such as the Colorado Village Collaborative, the nonprofit behind Globeville's tiny home village, have been trying to set up a handful of safe camping sites as an option to unofficial street encampments for those experiencing homelessness. The Safe Outdoor Spaces concept calls for creating sanctioned camps with toilets, running water and case management on site. The facilities would give their residents a shot at stability during the pandemic, when sweeps of unauthorized encampments could contribute to COVID-19 spread.

Although Mayor Michael Hancock initially expressed skepticism, in July he announced that he was backing the program. Soon the first option for a site was revealed: the parking lot of the Denver Coliseum. 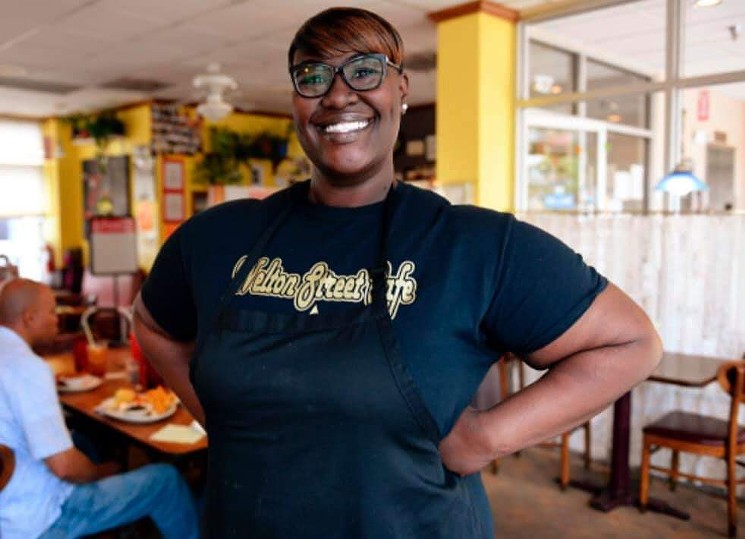 Fathima Dickerson is concerned about the possibility of a safe camping site coming to Five Points.
Courtesy of Sarah Cullen
But after residents of the Globeville and Elyria-Swansea neighborhoods began voicing opposition to the proposed Coliseum site, arguing that the city had consistently dumped projects and services that were unwanted elsewhere in their part of town, that location was scrapped. The proponents of Safe Outdoor Spaces began looking for more options.

In August, representatives of the Curtis Park Neighbors organization, which had already expressed its support for the concept, pitched the idea of setting up a safe camping site in the parking lot located between the Blair-Caldwell African American Research Library and a church.

There were already dozens of homeless people living in tents in the area, so there was clearly a need. And with the library closed to the public, the lot was almost always empty — so why not make better use of it? "I personally think that it’s needed and will help stabilize folks that are already there," explains Ryan Cox of Curtis Park Neighbors.

Since the city had already started sweeping large encampments again, proponents wanted to move quickly. Cole Chandler, director of the Colorado Village Collaborative, took the Curtis Park Neighbors idea to the city. Denver officials said that the library still wanted access to the lot, which wasn't really large enough for a safe camping site, anyway. So he asked, "What about the plaza next to the library?" To his surprise, he recalls, they didn't immediately shut down the idea. After, the area already had trees for shade as well as lights.

In fact, on September 12, Mayor Hancock posted on Facebook that his administration and the service providers had selected Cousins Plaza, located between the library and the playground section of Sonny Lawson Park, as a possible location for a safe camping site..

Chandler and his group had already inspected over 100 potential sites; they were excited that a neighborhood group had come up with this option, and that the city supported it. Even Denver Public Library leadership backed the proposed location.

"We support the creation of this sanctioned camping site along with other solutions to provide much-needed resources for the unhoused in our community now and in the future," says Olivia Gallegos, a DPL spokesperson.

There was just one problem: Other neighbors did not support the location. In fact, Hancock's announcement came as a surprise to most of them. The area covered by Curtis Park Neighbors stretches northwest of Welton Street...and that left a lot of room for dispute among other residents.

"We understand the challenges of homelessness within our district and within our city; however, we weren’t made aware" of this proposal, says Cowans, who's actively opposing Cousins Plaza as a safe camping site. "Some say, 'Oh, they’re already there.' That doesn’t mean that you get to make a profound sanctioned decision by the city to say this is what we’re deciding for you."

And even Cox doesn't like the plaza option as well as the parking lot. "All things being equal, we would love to see the plaza serve as a plaza, but it’s a difficult situation. No site is perfect," he says, adding that he understands the concerns now being voiced, that "this neighborhood has certainly carried the load for the city for decades, and this is, for some folks, I think, one more site that’s put in in this area."

One site too many for Cowans. "My position is, no, not there at that site, at that location. Not on main street, on Welton," he says. "We care, the African-American community cares. Don’t just by default say, 'Nobody else is going to do it and we’re going to make the decision to put it in there for them.'

Update: At 7:03 p.m. on September 15, Mayor Hancock posted this on his Facebook page:


As we all know, COVID-19 has only made the challenges of serving people experiencing homelessness all the more difficult. In Denver, these obstacles include a significant increase in the number of unsheltered people living on our streets.

Earlier this summer, I reluctantly agreed to a proposal from the Colorado Village Collaborative for up to three temporary managed campsites in Denver – a safer alternative to unsupervised encampments. The CVC and my team were preparing for a community conversation this week about a possible location for one of these campsites, in the historic Five Points neighborhood not far from where I grew up.

However, after further investigation into suitability, we are taking this option off the table. There are potentially better sites, with fewer legal and practical obstacles. Therefore, the virtual town halls that have been scheduled for this week will be postponed and we will look to schedule a citywide conversation.

I encourage all of us to take some time to reflect on the difficulties of finding a suitable location for a use such as this. The need to serve our neighbors experiencing homelessness remains one of the most significant challenges we face today, and solutions will require broad understanding and collaboration.

Initially, there had been three community meetings scheduled to discuss the proposed site. With Hancock taking the Five Points option off the table, the official meetings organized by the city have been cancelled. However, there will still be a community meeting starting at 7 p.m. tonight; it will now be hosted by Brother Jeff. Find out more here.
KEEP WESTWORD FREE... Since we started Westword, it has been defined as the free, independent voice of Denver, and we'd like to keep it that way. With local media under siege, it's more important than ever for us to rally support behind funding our local journalism. You can help by participating in our "I Support" program, allowing us to keep offering readers access to our incisive coverage of local news, food and culture with no paywalls.
Make a one-time donation today for as little as $1.