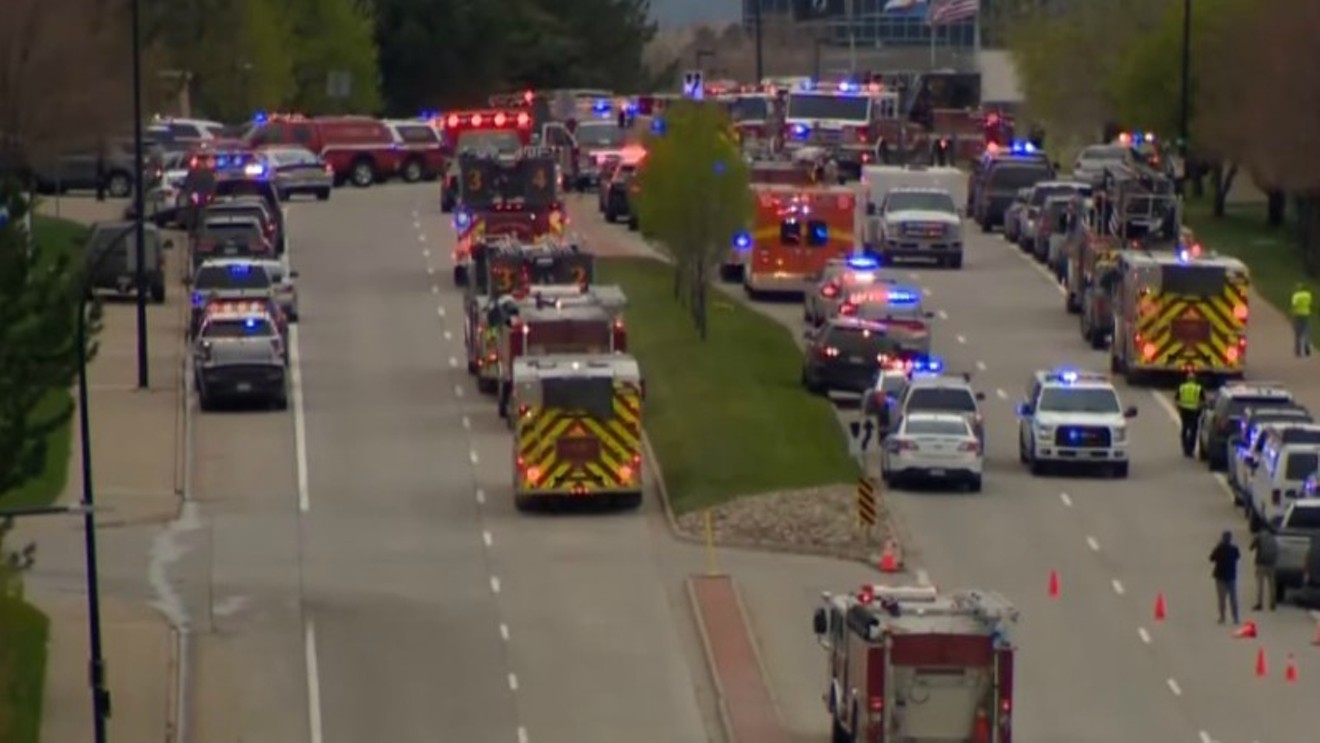 Emergency and police vehicles gathered near the STEM School of Highlands Ranch campus after the May 7 shooting. 9News via YouTube
Update: Devon Erickson, the eighteen-year-old on trial for the STEM school shooting in Highlands Ranch, is facing 48 counts, including murder, according to CNN. Erickson was in court on May 15 to hear the charges. The second alleged shooter, sixteen-year-old Alec McKinney, is facing a murder charge as an adult. All documents in both cases remain sealed, according to the Colorado Judicial Department.

The STEM School of Highlands Ranch will be closed today and for the rest of the week following a May 7 shooting during which one student died and eight others were injured.

Two suspects, both students at the school, are in custody related to the attack. One is a juvenile female who may have been transitioning to male, while the other has been identified as eighteen-year-old Devon Erickson. Both are said to have been captured without injury.

The student who died has now been identified as Kendrick Castillo, eighteen. The names of the injured parties haven't been made public; three remain in intensive care, while one has been upgraded from serious to fair.

At a press conference yesterday afternoon (it can be viewed below), Douglas County Sheriff Tony Spurlock explained that because of the ongoing investigation and an anticipated prosecution in the tragic matter, authorities would release only the most basic details about the sequence of events. But he added a few more facts at a followup press availability this morning. Here's what we know thus far.

At 2:04 p.m. on the 7th, the Dougco sheriff's office tweeted: "Unstable situation, shots fired at STEM school at Ridgeline and Plaza. Avoid area. Media go to north side of AMC" — a reference to a nearby movie theater.

This message appeared only a little more than ten minutes after initial word about the situation at the school reached law enforcers. Spurlock said the first report about the shooting arrived at 1:53 p.m.

The STEM complex caters to a total of 1,850 elementary, middle school and high school students. It's a charter institution that doesn't have a full-time school resource officer on campus, but it's so near to a Douglas County Sheriff's Office substation that deputies are said to have arrived at the scene in two minutes, when gunfire could still be heard. At this morning's followup press conference, Spurlock pointed out that an armed security guard employed by the school was at another location in the complex when the shooting broke out.

Spurlock said that the two suspects "got deep inside the school and engaged students in two separate locations" that he declined to identify, although he divulged this morning that they gained access to the school via the northeast entrance to the middle school. The deputies are said to have struggled with the suspects, and earlier comments from DCSO Undersheriff Holly Nicholson-Kluth suggest that something similar had been going on even prior to their arrival. The sheriff declined to share information about the events that led to the pair being taken into custody, or to say whether deputies had shot at them. However, he has now confirmed that at least two handguns were involved.

Here's video of the May 7 press conference courtesy of 9News:


We don't yet know how the suspects obtained their weapons — a major controversy that sprang up after a threat just prior to the twenty-year mark of the Columbine High School shootings led to school closures throughout metro Denver on April 17. An autopsy later revealed that the eighteen-year-old Florida woman whose trip to Colorado prompted this action had already taken her own life before the closures took place; her body wasn't found until later that day.

This morning, though, authorities confirmed that the federal Bureau of Alcohol, Tobacco, Firearms and Explosives will be assisting in the investigation related to the guns.

Questions about a lag in communication regarding the threat also cropped up in the earlier incident, and they may do so again this time around. Instructors at one Douglas County school didn't receive any official communication about the shooting until approximately 3:30 p.m., about ninety minutes after the general public was informed. By then, most of the students had already been dismissed for the day — and while that school is many miles away from the STEM School of Highlands Ranch, the delay remains surprising given the complaints about confused communications before the massive closures less than three weeks earlier.

After the STEM shooting, students at the school were transported to the nearby Northridge Recreation Center, where parents were required to show their IDs before they were allowed to leave with their kids. The process was time-consuming and emotional, but few complaints about it have surfaced.

At 10:10 p.m. on May 7, Douglas County School District Superintendent Thomas Tucker shared the following communique updating families on the situation:

I am saddened to share that one student died in today’s shooting at STEM School Highlands Ranch, and others were injured. At this time, I am not sharing the names out of respect for the families. However, our hearts are with all of STEM’s students, families and staff during this incredibly sad time.

Supporting one another in the coming days, weeks and months is critical.

STEM School will be closed the remainder of this week. All other DCSD schools will be open as normal with heightened security including additional patrols from our local law enforcement partners. Updates will be provided as they become available.

On Wednesday, May 8, we will have a Crisis Support Center available to all STEM students, staff and families at the St. Andrew United Methodist Church in Highlands Ranch, beginning at 8:00 a.m. Douglas County School District crisis team and community partners will be available to provide age-appropriate grief support and resources.

In addition, all DCSD schools will have support staff available, on-site, to help students and staff with processing today’s tragedy.

As parents, you are the very best support system in meeting your child’s needs. You can provide the best explanation that fits with your values and beliefs, knowing that other parents may share this information with their children, and informal discussions may take place between students. You may wish to have a family discussion to talk briefly about loss of life and to acknowledge any feelings that may surface. Knowing what to say to your child is often difficult. When no words come to mind, a hug may provide comfort....

Feelings can be especially overwhelming at a time like this. There is no right way to express the sadness, grief and confusion that students will feel when they encounter a tragedy. For example, students may react by needing more sleep or being more emotional. On the other hand, a student may not react outwardly at all. Students can be particularly vulnerable if this event reminds them about another loss or sadness in their own lives.

Expect that resolving the feelings related to this tragedy may take time. It is normal for a child to bring up the tragedy after it has happened and often when least expected.

We are a united family. We are here to support each and every one of you — students, parents and staff — and will continue to do so as long as needed. Together, we will get through this difficult time.

Yesterday, Colorado Courts spokesman Rob McCallum tweeted that the suspects would likely appear at Douglas County Court for an advisement hearing at 1:30 p.m. today, May 8. It's now confirmed that Erickson will be, but not the female juvenile; 18th Judicial District DA George Brauchler has not yet decided whether to charge her as an adult.

In the meantime, outside groups are already using the shooting to push their particular agendas. Colorado Ceasefire castigated Douglas County for its opposition to the new red-flag law, which allows law enforcement to seize guns from those deemed a threat to themselves and others.

By the way, Spurlock said neither of the suspects in the latest event were on any kind of police watch list. If there were warnings about what they planned, they don't appear to have reached the law enforcement in time to prevent yet another horrific school shooting.

Update: This post has been updated to include the name of the victim and other information shared at a supplementary press conference at 6 a.m. on May 8.
KEEP WESTWORD FREE... Since we started Westword, it has been defined as the free, independent voice of Denver, and we'd like to keep it that way. With local media under siege, it's more important than ever for us to rally support behind funding our local journalism. You can help by participating in our "I Support" program, allowing us to keep offering readers access to our incisive coverage of local news, food and culture with no paywalls.
Make a one-time donation today for as little as $1.