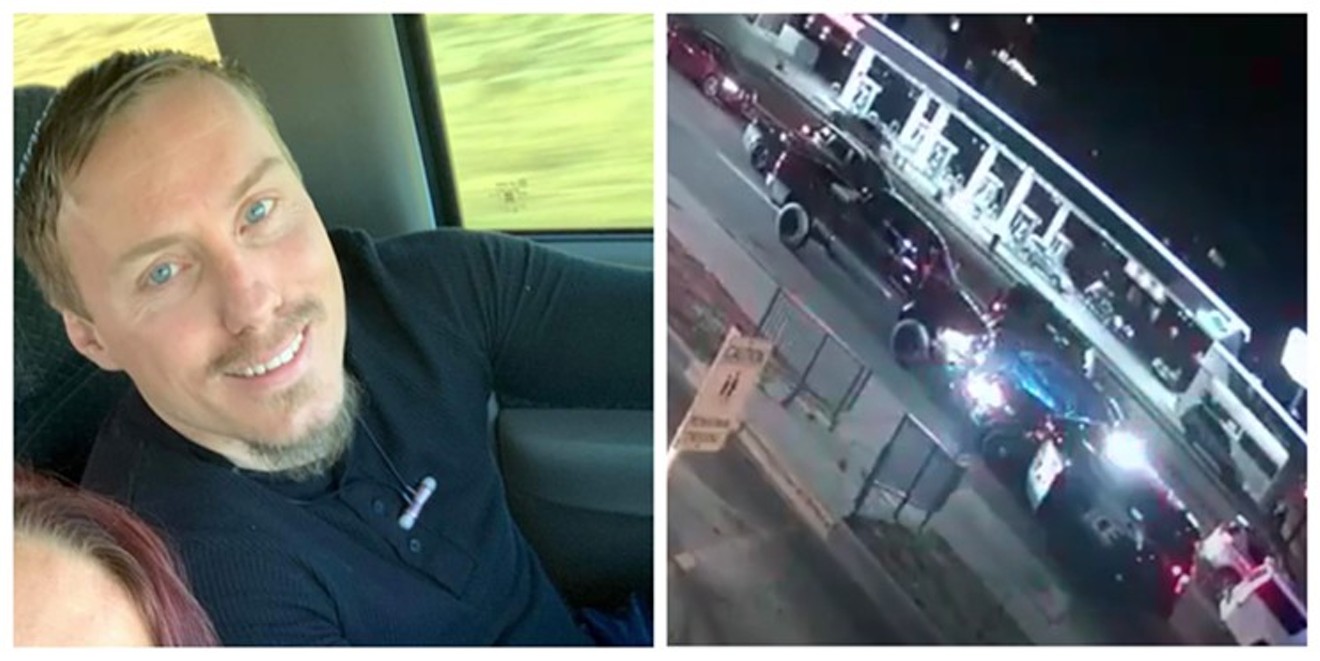 John Pacheaco Jr. and an image from surveillance video shortly before he was fatally shot by members of the Glendale Police Department. haltzmanlaw.com
In a year when violent law enforcement encounters made big news, the Glendale police killing of John Pacheaco Jr. on Halloween 2020 stands out in part because Officer Chandler Phillips, one of the cops who fired an estimated seventeen shots during the incident, later shared a social media post juxtaposing a photo of him pouting about being stuck on desk duty with an image of Mark Wahlberg from The Other Guys declaring, "I'm a peacock! You gotta let me fly!"

More typical are the circumstances of the shooting, during which Phillips and another colleague opened fire into a moving vehicle — a tactic that is widely derided by police experts and was banned by the Denver Police Department after the death of teenager Jessie Hernandez in 2015, a shooting that sparked widespread protests and a huge settlement.

As for the Glendale Police Department, attorney Matthew Haltzman, who represents Pacheaco's family and is gathering material for a potential wrongful-death lawsuit, obtained a slew of internal documents by way of a Colorado Open Records Act request, including one that prohibits shooting into a moving vehicle unless the lives of officers or others are endangered. Based on video of the incident, Haltzman concludes that this standard wasn't met. The two officers who fired "went against their own training," he says.

The GPD has declined to talk about the details of the shooting, citing an ongoing investigation being conducted by the Denver Police Department, in whose jurisdiction the homicide happened.

The sequence of events that led to the death started just before 10 p.m. on October 31, when a Dodge pickup truck reported stolen came to a stop on South Colorado Boulevard not far from the Alameda intersection; Pacheaco was behind the wheel. A few minutes later, with the truck still stationary, a Glendale officer pulled up behind it. Shortly thereafter, other units arrived and parked in a way intended to make escape impossible. The truck subsequently rolled forward into one police car before shifting into reverse and hitting more vehicles to the rear. At that point, the cops started shooting — and Pacheaco didn't survive the wounds he sustained.


A second video, which comprises surveillance footage, shows the truck entering the frame at around the 4:40 mark, after which police arrive. The truck begins moving at about 9:50 into the video, after which triggers are pulled:


The documents secured by Haltzman offer fascinating insights into police procedures and the jargon that goes with the job. "Defensive Tactics Training," from February 2020, includes these techniques under the heading "Defensive Threats Against Handgun:"


*Toy Soldier (from front, to head)

*Swat the Fly in the Ear (gun to side of head)

*Brush off the Dust (gun from the side — behind the arm, touching)

*Catching the Ground Ball (from the side — in front of arm, from the front — pushing the stomach)

The summary for this tactic begins: "Student will begin escorting individual down the hallway using Arm Bar Control to a mat, where they will perform a takedown. Once on the ground, the individual is to be handcuffed." Next, "Students will then perform 10 seconds of each of the following skills. During the time Instructors will strike at the student with pad to enforce the mindset of blocking: Straight Punch, Hammer Fist, Palm Strike, Elbows, Knees, Kicks." Finally, "Student will perform a Brachial Stun followed by an inside takedown. Once on the ground, the student is then to handcuff the individual."

Another document from 2019 presents a variety of scenarios — among them "Sleeping Suspect With a Knife":


Officers are dispatched to a disturbance at Target. Dispatch advised the subject is yelling at customers and refusing to leave the property. Loss prevention stated they won't go near the male because he has a large knife on his belt. The knife was not displayed to anyone in any threatening manner. Upon officers arriving, the male is found sleeping on a bench.

Much of the GPD material makes it clear that such responses should be avoided. For example, a four-hour PowerPoint presentation titled "Surviving Verbal Conflict: What every public safety professional needs to know about verbal de-escalation" is festooned with lighthearted graphics like the one below, and features a guest appearance by Jack McBrayer of the Tina Fey sitcom 30 Rock.

haltzmanlaw.com
The most on-point reference appears in the "Defensive Tactics & Arrest Control" manual, whose "Deadly Force Guidelines" spotlight the following passage: "Firing at or from a moving vehicle is prohibited except under extreme conditions where the officer reasonably believes that there is an imminent threat of death to them or a third party if the officer does not do so. Before discharging a firearm at or from a moving vehicle, officers must reasonably believe that the only reasonable means of protecting themselves and/or a third party is the use of deadly force."

Haltzman believes the officers who shot at Pacheaco violated this tenet.

"When the analytics of the videos are really broken down, you can see it's the firing of the weapon that caused the most destruction in this case," he says. "What we see prior to the shooting of multiple rounds is the vehicle moving at a very low speed — no faster than ten miles per hour, and probably a lot lower than that. We're still working on the biomechanics of that. But it's under control, and after the shooting is when it goes out of control."

This was not "an intentional act on the part of Mr. Pacheaco," Haltzman continues. "They shot seventeen times and hit Mr. Pacheaco in the chest, the neck and the arm — shots that maimed and completely disconnected the functions of the driver. So it was the last act of an individual dying in the driver's seat with his foot ostensibly on the gas, or at least not on the brake."

Haltzman argues that the shooting caused risk to others, including the officers, rather than preventing it. The first vehicle struck was unoccupied, "so they were basically shooting in response to minor property damage," he says. "Then a second vehicle is backed into — but there was a third vehicle that was ultimately hit, and the officer in it had to go to the hospital for minor injuries. He was released that evening, but had they not fired into the vehicle, it would never have happened."

According to Haltzman, Phillips and the other officer who fired had been on the Glendale force for less than eighteen months, and more veteran cops on the scene didn't shoot. This suggests that "apparently none of the training stuck," he says.

Click to read five Glendale Police Department training documents: "2019 Scenarios," "2020 Defensive Tactics" and "Arrest Control 2019," plus the Defensive Tactics Instructor Manual and a program overview PowerPoint from 2018.
KEEP WESTWORD FREE... Since we started Westword, it has been defined as the free, independent voice of Denver, and we'd like to keep it that way. With local media under siege, it's more important than ever for us to rally support behind funding our local journalism. You can help by participating in our "I Support" program, allowing us to keep offering readers access to our incisive coverage of local news, food and culture with no paywalls.
Make a one-time donation today for as little as $1.