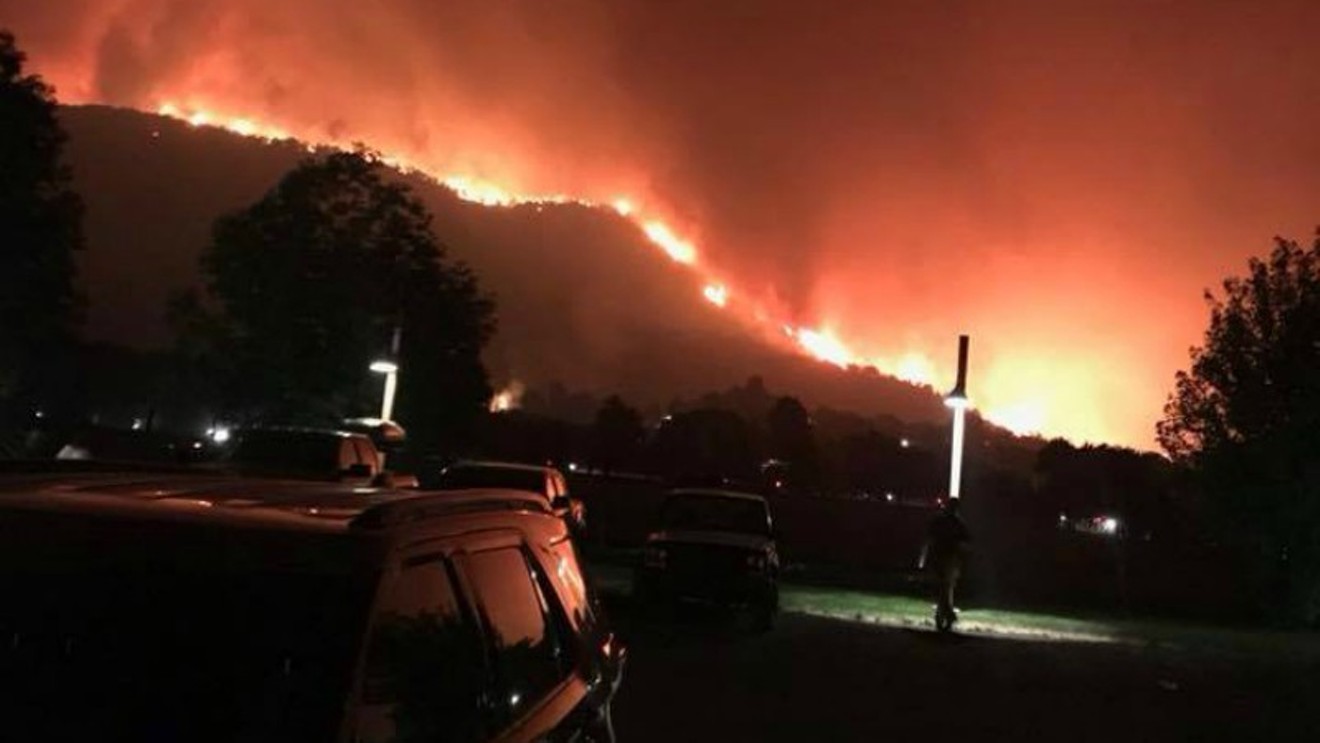 The Facebook caption on this photo reads: "Due to fire activity on Highway 82, a second evacuation shelter has been opened at Roaring Fork High School in Carbondale (2270 Hwy 133, Carbondale, CO 81623). Missouri Heights residents should evacuate utilizing Fender Lane to Catherine's Store Road." Eagle County Sheriff's Office
Much of the focus regarding current wildfires in Colorado has been on the 416 fire outside Durango, the worst of the early blazes, and what is now known as the Spring Creek fire, a Costilla County disaster that has already become the third-largest conflagration in state history. But there's growing concern about the Lake Christine fire near Basalt, which is currently smaller than the other two blazes but is still an enormous danger to life and property, with an estimated 500 homes already evacuated and three confirmed destroyed as of this morning.

The most recent update from the Eagle County Sheriff's Office, shared at 8:07 p.m. on July 5, more than doubles the acreage estimate from 24 hours earlier.

"The #LakeChristineFire is now at 5,263 acres and is still 0 percent contained," the item begins. "Winds continue to be erratic, so we can not predict which way the fire is going."

The update adds: "All evacuation orders are still in place. We still do not know when it will be safe to allow evacuees to return home. Please know that saving lives and property are top priorities. Once evacuation orders are lifted, we are working on a method to ensure only residents of those areas are allowed to enter. This is for neighborhood safety and security. More details will be shared as the process is refined for re-entry." 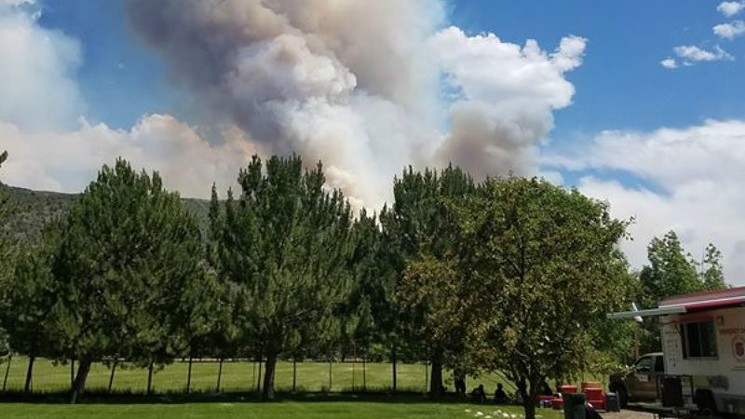 A long shot of the Lake Christine Fire.
pitkinalert.org
The administration of the Lake Christine fire has been passed from local authorities to federal ones, but the new National Wildfire Coordinating Group InciWeb page is in its nascent stages. There are no acreage or containment estimates to date, and neither have any photos been uploaded.

Likewise, the summary of the incident is basic. It reads: "The Lake Christine Fire is burning approximately one mile northwest of Basalt, Colorado. The fire grew significantly on the Fourth of July, driven by strong outflow winds, extremely dry fuels, and single digit relative humidity. The extreme fire behavior on July 4 necessitated evacuations of several hundred residents by the Eagle Creek Sheriff's Office. Local crews worked through the night, saving hundreds of homes. Unfortunately, three homes were destroyed."

Like the Spring Creek fire, which Lake Garland resident and undocumented Danish immigrant Jesper Joergensen has been accused of starting, the Lake Christine fire is believed to have been caused by humans. According to the Eagle County Sheriff's Office, 23-year-old Richard Karl Miller and 22-year-old Sarah Marcus, both residents of El Jebel, have been accused of fourth-degree arson for allegedly shooting tracer rounds at a Basalt shooting range on the evening of Tuesday, July 3, that caused the initial sparks.

Here's a July 4 map showing the perimeter of the fire. 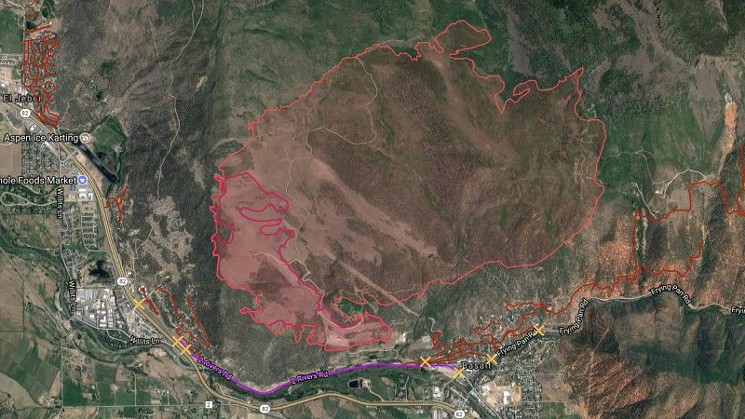 The link to the map of the Lake Christine fire includes details about evacuation areas and more.
Google Maps
Things escalated quickly going into the Fourth of July holiday.

As of 9:10 a.m. that morning, the ECSO posted that the Lake Christine fire was "currently at 340 acres and is 0 percent contained. Multiple agencies including the @CarbondaleFireDistrict are continuing with FIre Operations today. Evacuation orders are still in place for Hillcrest, Silverado, Original, Pine Ridge and Sagewood neighborhoods, with eighty homes within the evacuation area. An evacuation center is open now at Basalt High School."

Mere hours later, at 4:45 p.m. on the 4th, the ECSO revealed that the total number of acres involved in the fire were around seven times the number from the morning. The estimate of 2,377 acres is still the most recent one.

Moreover, containment was still estimated at 0 percent and the number of evacuated homes had gone up to 500. 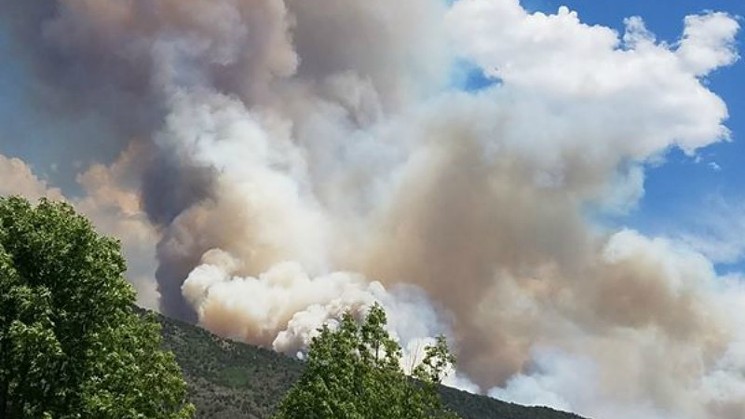 The smoke from the Lake Christine Fire seen from a distance.
pitkinalert.org
In the subsequent hours, the news just kept getting worse. Here are some additional ECSO warnings:

"Power to the Roaring Fork Valley above Basalt is at risk due to #LakeChristineFire. Prepare for up to a 72 hour outage."

"EFFECTIVE IMMEDIATELY, AND EXTENDING UNTIL FURTHER NOTICE, EAGLE COUNTY EMERGENCY OFFICIALS HAVE ISSUED AN EVACUATION ORDER FOR ALL PERSONS LIVING, WORKING, OR TRAVELING IN THE VICINITY OF EL JEBEL MOBILE HOME PARK. THIS AREA IS AT IMMEDIATE RISK FROM WILDFIRE."

Just shy of 11 p.m. on the 4th, a notice of more benign fire activity was shared: "Fire crews are conducting back burn operations near El Jebel trailer park in an attempt to slow the growth of the fire. Please do not call 911 to report flames in the area."

Also posted in the minutes before midnight was this advice: "Due to extreme fire conditions and erratic winds, areas being evacuated are rapidly changing. If you feel unsafe, please evacuate immediately; do not wait to be told to evacuate. We are working to verify details and will update as we receive confirmation from crews in the field."

This Eagle County Sheriff's Office photo, shared on July 4, shows just how close the fire has gotten to local businesses.
Photo by Katie Baum Hueth courtesy of the Eagle County Sheriff's Office
A subsequent message noted that "animals cannot be taken to the evacuation center at Roaring Fork High School. Alpine Animal Hospital 17776 Old Hwy 82 can take pets and has room for a few horses."

Then, finally, some good news: "We are pleased to report that backburning operations were successful near the El Jebel mobile home park. There is currently no more active progress of the fire in that direction and crews have been able to prevent the fire from crossing Highway 82. They have a long night ahead of them, but winds appear to be easing which should aid firefighting efforts. Evacuations remain in place, and road closures are still in effect."

At 12:06 a.m. on July 5 came this: "Fire activity appears to be stabilizing and crews are optimistic that no more evacuations will occur tonight. This will be the last post this evening unless conditions change. Information Officers will be on duty beginning at 8:00 a.m. tomorrow, and will post new information as it becomes available following the morning operations briefing. Be safe and have a good night!"

Unfortunately, more items have indeed appeared since then, including a voluntary evacuation order for residents living north of Highway 82 and east of County Road 100 that went up at 1:06 a.m.

Subsequent posts make it clear the danger is far from over.

Update: This post was updated on July 5 and July 6 with new details about the Lake Christine fire.
KEEP WESTWORD FREE... Since we started Westword, it has been defined as the free, independent voice of Denver, and we'd like to keep it that way. With local media under siege, it's more important than ever for us to rally support behind funding our local journalism. You can help by participating in our "I Support" program, allowing us to keep offering readers access to our incisive coverage of local news, food and culture with no paywalls.
Make a one-time donation today for as little as $1.