Lisa Calderón is running for Denver mayor. Gem Reul
Today, October 15, Lisa Calderón is launching a campaign to unseat incumbent Mayor Michael Hancock in May 2019. Her campaign slogan? “It's Time” — which alludes to, among other things, her bid to become the first female mayor of the Mile High City.

Calderón joins a field of contenders that underwent a significant shakeup in recent weeks with the exit of entrepreneur Kayvan Khalatbari and the entrance of former state lawmaker Penfield Tate.

Calderón, age fifty, is hardly an establishment candidate, though she is well known for her activism and work around domestic violence, criminal justice and anti-gentrification. Calderón is currently a criminal justice professor at Regis University and the co-chairwoman of the Colorado Latino Forum. A Denver native born to a Mexican-American mother and an African-American father, she holds four degrees, including a doctorate of education, a master's degree and a law degree, and over the years has run nonprofits assisting survivors of domestic violence and inmates transitioning back into society after serving jail or prison sentences.

She's also been a vocal critic of Hancock and a thorn in his side since his first day as mayor.

Calderón has many issues with the way the two-term mayor has run the city, citing a housing crisis, overcrowded jails, inefficient and non-transparent agencies, traffic congestion and unrestrained development.

Yet she says it was a broken promise that Hancock had made to her that precipitated her opposition to him and his administration; in 2011, shortly before Hancock became mayor and was then a city councilman, Calderón recalls having a conversation with him about reining in over-aggressive policing in neighborhoods like hers, Cole, that were predominantly communities of color.

“My son was being racially profiled by the police,” Calderón recalls, “so I told Michael, 'You've got to do something about this aggressive policing policy, because our children are being harassed and abused.'"

“[Hancock] emphatically said he would do something,” Calderón continues. “But then, under his reign as mayor, he accelerated the aggressive policing. That's when I realized that a black mayor wasn’t going to save us. This is a guy who will say one thing to your face, but when he ascends to power he’ll do something else. He didn’t need us once he had his power structure in place. So I have been opposing him ever since. I feel like he lied to me." 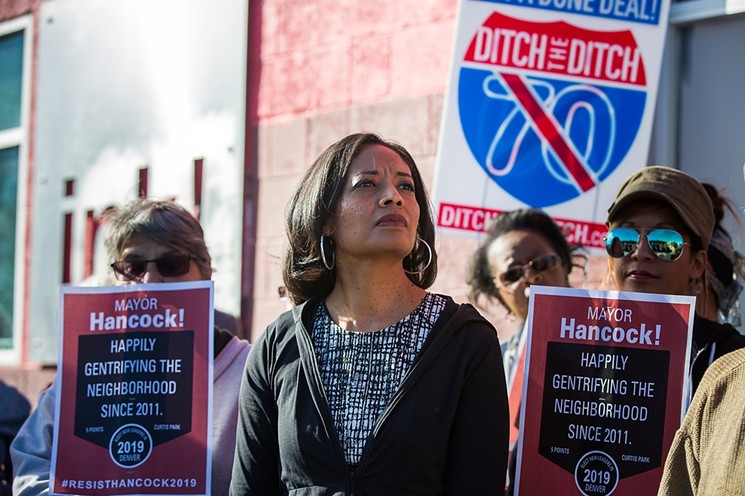 Then, when Leslie Branch-Wise, a Denver Police detective and former member of Hancock's security detail, came forward with allegations and evidence this past spring that the mayor had sent her unwanted sexually suggestive text messages in 2012, Calderón was one of the organizers behind the “Time's Up Hancock” rally, which called for his resignation. (Hancock did not say the behavior amounted to sexual harassment, but apologized for what he and his office called "inappropriate behavior.")

“Time's Up Hancock came from being absolutely disgusted that city council was not holding Hancock accountable and not making an investigation,” Calderón explains. “That was our pre-Kavanaugh moment on a much smaller scale. Here was a woman saying that she was sexually harassed by the most powerful man in our city, and yet city council was saying, 'We can’t really do anything about it.'"

Calderón's feuding with the Hancock administration came to a head when the city denied her nonprofit, the Community Re-entry Program, a $550,000 contract to continue overseeing jail-to-community transition services that Calderón had herself helped design under former mayor John Hickenlooper. Calderón is currently suing Hancock and the City of Denver in federal court, alleging that the contract was denied because of discrimination and political retribution against her. (The Hancock administration has denied these claims).

After she lost the program (and before she landed her professorship at Regis), Calderón was unemployed for nine months. During that time, she says, she had a lot of time to think about running for mayor, though she wanted first to see who would emerge. She has not seen the type of candidate she was looking for.

“It needs to be a woman,” Calderón says flatly. “Not only haven’t we had a woman mayor — which is ludicrous in 2018 for that not to be a strong possibility — but we’re at a point of convergence where the future of our city is at stake.”

By announcing her candidacy, Calderón joins a national wave of women running for elected office, in what's being dubbed another “year of the woman” (the first being 1992, following the Clarence Thomas/Anita Hill hearings). But Calderón says she was also convinced to throw her hat in the ring because she knows Denver's neighborhoods and has years of firsthand experience with public safety and the full spectrum of housing (she says she's experienced brief periods of homelessness, living in public housing, and is now a home owner).

Lisa Calderón speaking before a crowd at a demonstration against Brett Kavanaugh in front of Cory Gardner's office.
Kenzie Bruce
So what is her platform?

At this early stage of her campaign, Calderón says that she's organizing policy positions under three broad ideals:

Calderón will champion equity for women, so that more city departments will be headed by women, female city workers will have equal pay with men, and city employees who experience sexual harassment in the workplace will have a safe place to report that behavior. Additionally, she wants equity for workers, including a mayoral administration that would be less antagonistic toward unions. And she wants equity for residents, including giving the people of Denver more say over development in their neighborhoods.

She envisions a city administration that is more transparent, with robust open-records laws and independent agencies that help select who sits on boards and commissions. When it comes to transportation, fairness means building out public transit and bicycle infrastructure so that Denver is not so much of a car-based city. She wants to put pressure on developers to include more affordable housing in new projects and hiring local, smaller contractors to handle city building projects rather than large, out-of-state corporate contractors.

Calderón wants to continue reforms of the police and sheriff departments, but says the city needs measurable outcomes based on ongoing studies of results rather than “simply checking boxes.” She wants a sheriff, police chief and Independent Monitor who are selected independently, rather than appointed by the mayor. “If anything, I’m looking to decentralize the power of the mayor," she says. “The administration is top-heavy right now, and we need to put those resources back to base levels.”

Calderón will elaborate more on her platform at a speech this Wednesday, October 17, at 10:30 a.m. at the Rev. Dr. Martin Luther King, Jr., statue in City Park.

Asked about funding her run for mayor, Calderón says she is aware that Hancock and Tate have significant resources behind them. Hancock's campaign has $532,000 in the bank. Tate clearly has some cash on hand, too — enough to run a prime-time advertisement two weeks ago during the Rockies wild-card game.

“I’m a realist; I know we have to raise a lot of money,” Calderón says. “At the same time, we have to do with people what they do with money. We have to be rich in people power."

Calderón says she hopes to emulate other campaigns run by women of color around the nation that have generated a groundswell of support. Her formal campaign launch party will take place on November 14.

Asked by Westword if she's worried that all of her criticism of Hancock over the years will make her a larger target, Calderón says, “When you’ve had someone who’s almost killed you, compared to someone who says bad things about you, I can deal with that."

Calderón was referring to a period in her young adulthood when she says she had an abusive boyfriend who controlled her, manipulated her, and once sent her to the hospital after throwing her head-first into a wall. The boyfriend took Calderón out of state, she said, where he briefly held her hostage in his family home. When she saw her boyfriend's battered and downtrodden mother, she saw what her future might become. She called 911 to be rescued, and had the police take her to a domestic-violence shelter.

This formative experience is what later inspired her to work at the Boulder Safe House, a nonprofit serving victims of domestic violence, where Calderón was a legal and social policy director from 1995 to 2007. Recently, that work came up in a national context during Brett Kavanaugh's nomination to the U.S. Supreme Court; Calderón hired and trained Kavanaugh's second accuser, Debbie Ramirez of Boulder.


Calderón had permission from Ramirez to speak to local news outlets, including Westword, about Ramirez, and even made an appearance on CNN in an interview with Don Lemon (above).

But while that may have been Calderón's highest-profile media appearance, she says, “I’ve been getting my face out there the past ten years in the community.”

Asked about her chances of winning and what she thinks of the current field of candidates, she says, “I’m glad Penfield has gotten into the race because Penfield’s and Michael’s base is really similar, so they’ll be competing for the same voters.”

She believes her voters will be looking for something much different.

“Are we simply going to change seats of political power-holders, or are we going to change our political power structure fundamentally?" she asks.
KEEP WESTWORD FREE... Since we started Westword, it has been defined as the free, independent voice of Denver, and we'd like to keep it that way. With local media under siege, it's more important than ever for us to rally support behind funding our local journalism. You can help by participating in our "I Support" program, allowing us to keep offering readers access to our incisive coverage of local news, food and culture with no paywalls.
Make a one-time donation today for as little as $1.