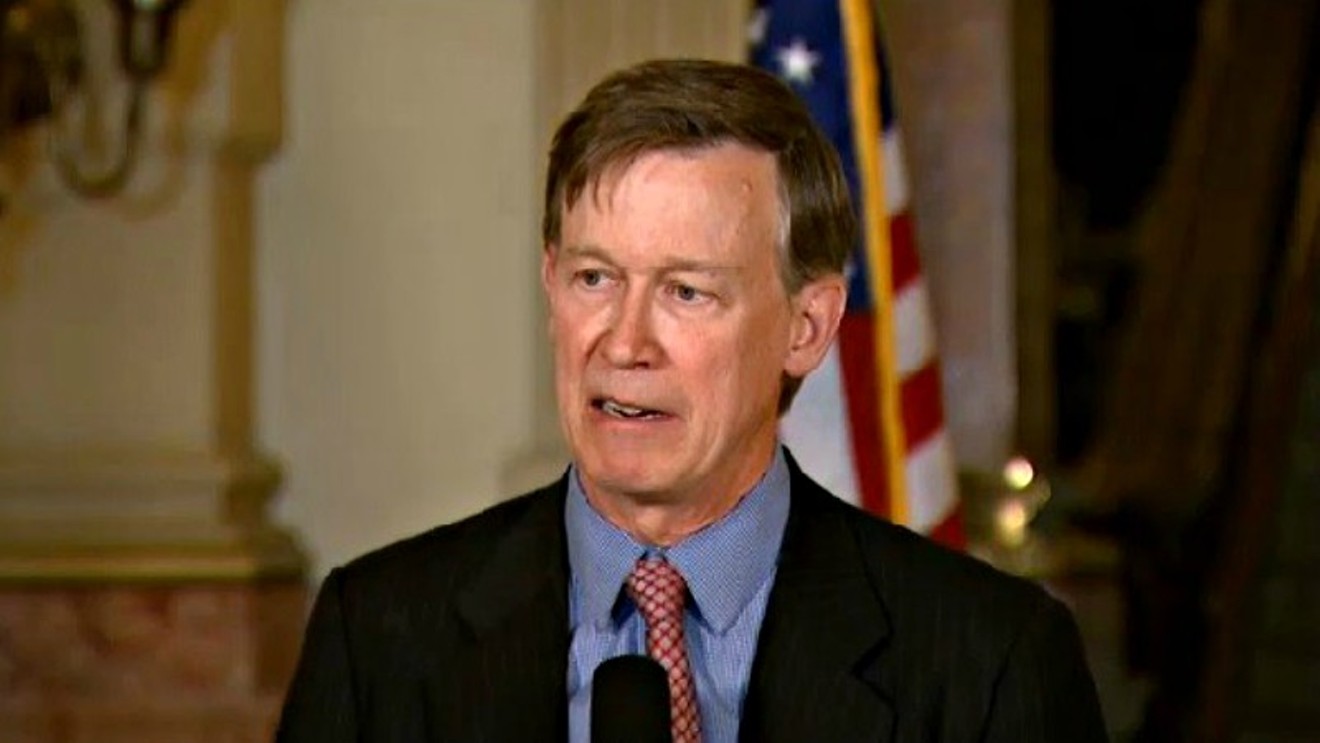 Governor John Hickenlooper's attempt to fix an error in a funding and tax bill by way of a special session has failed in a big way. File photo
Yesterday, October 3, a special legislative session called by Colorado Governor John Hickenlooper in an attempt to fix a gaffe in a new law pertaining to marijuana taxes crashed and burned. What followed was a blame game in which Republicans and Democrats tried to score political points while special districts such as RTD continue to lose thousands of dollars per month.

The centerpiece of this drama is Senate Bill 17-267, which is accessible below. Passed in May, the legislation doesn't immediately appear to have anything to do with cannabis. After all, its title is "Concerning the Sustainability of Rural Colorado," and its purpose, as described in the introduction, "is to ensure and perpetuate the sustainability of rural Colorado by addressing...demographic, economic, and geographical challenges." But the measure also reconfigured rules related to weed, replacing a 2.9 percent tax on recreational marijuana with a special pot tax boost from 10 to 15 percent.

Unfortunately, an error was made in the way the cannabis-related portion of SB 17-267 was written, and the consequences were substantial. "The drafting mistake unintentionally prevented some special districts — the Regional Transportation District and the Scientific and Cultural Facilities District in the Denver metro area, as well as rural transportation districts across the state, a housing district in Summit County and a hospital district in Montezuma County — from collecting revenues on retail marijuana sales," a Colorado House Democrats release points out.

The dollar amounts are significant. RTD is estimated to have lost $560,000 per month since the bill took effect on July 1, with the Scientific & Cultural Facilities District, which includes the Denver Zoo, Denver Art Museum, Denver Botanic Gardens, Denver Center for the Performing Arts and Denver Museum of Nature & Science, being hit for around $56,000 monthly over the same period.

On September 14, Hickenlooper announced his preferred method of resolving the situation: a special session. "Since this issue was discovered, we worked with department staff, stakeholders, sponsors and members of the General Assembly on options to correct this unintended consequence," he noted in a statement issued that day. "After hearing about the potential impact on citizens around the state, it is clear that this problem is best solved as soon as possible. This special session will be solely to address this one narrow correction."

The special session concept wasn't embraced by everyone. On September 29, for example, Senate President Kevin Grantham, a Republican from Cañon City, ripped what the GOP characterized as "Hickenlooper's shocking proposal to let special taxing districts fund the 'emergency' legislative session scheduled for next week, despite those districts having a direct financial stake in the outcome of deliberations."

Colorado Senate President Kevin Grantham is seen as a hero to Republicans and a villain to Democrats after the special session fiasco.
Courtesy of Colorado Senate Republicans
In Grantham's words, "Having interested parties pay the cost of a special session has to be one of the worst ideas I’ve ever heard from this governor, coming in close second to his baffling and botched decision to hold an unnecessary special session without doing the pre-planning and consultations required to improve our chance of success. This idea would set a terrible precedent and has potential to create huge public misperceptions about the fairness and integrity of the process. We sometimes hear the criticism that politicians are 'bought and paid for,' but what the governor's proposing here would make that literally true. What's next? Will he try lining up sponsorships for the regular session as well? His complete mishandling of this situation, from beginning to end, doesn’t bode well for next week."

It didn't. Two different bills were pushed to repair the error, but the Transportation committee in the Republican-controlled state Senate rejected them yesterday via a party-line vote under the theory that the proposed remedy would have violated the Taxpayer Bill of Rights (TABOR).

At that point, the partisan bickering that had been bubbling along for weeks turned into a tsunami. Even Hickenlooper got into the game, issuing a statement that reads, "It is disappointing that the Republican-controlled Senate refused to fix an error, acknowledged as a mistake by all involved. Coloradans expect us to work together and solve problems. This week, we failed to do so. The special districts will continue to have unintended funding cuts — cuts that will have real implications for Coloradans who rely on buses to get to work, cultural institutions to educate their families, and other services."

Hickenlooper added: "I strongly commend the bill sponsors for all of their efforts. In the end, partisan politics overshadowed the clear intentions of Colorado voters. These tactics only divide us and fuel cynicism. We have been raised to own up to our mistakes and fix them. Most Coloradans believe these values should apply to everyone, especially to government."

Colorado House Majority Leader KC Becker sponsored one of the unsuccessful attempts to fix the error.
Courtesy of Colorado House Democrats
As for House Majority Leader KC Becker, who sponsored one of the dismissed bills, she stated, "We presented a constitutionally sound measure to fix a mistake that will impact Coloradans across the state. Unfortunately, after we assembled for the special session, the other party chose to waste this opportunity to get this right. It’s very disappointing that they chose partisan politics over Coloradans who have repeatedly asked for these services."

Grantham, though, was unbowed, sending out a blast that went on for three paragraphs. Here it is:


"This unfortunate waste of time and tax money could easily have been avoided if Gov. Hickenlooper spent more time working in a bipartisan fashion in advance of calling the special session. Our opposition to this special session was well known to the governor. He knew we had philosophical and constitutional questions about the so-called fix he was backing. More bipartisan consultation and pre-planning was needed to improve our chance of success. But he plowed ahead anyway, without adequately laying the groundwork for success.

"So where do we go from here? Back to work, as always. The three months between now and January give us the time we need to work through issues that were impossible to resolve in a surprise special session. We agree that finding a solution to the bill-drafting mistake is possible and we regret any hardships the glitch may be causing in some of the special districts. But we are also working toward a constitutional solution, which addresses the problem without violating our oaths of office or further complicating things by getting us sued for a TABOR violation.

"Finding a resolution, a constitutional resolution, will be the focus of this caucus in the months before the regular session in January. I look forward to addressing this issue and all of our top priorities when the legislature meets again."

The biggest loser in this kerfuffle is RTD, yet district general manager and CEO David Genova's statement about what happened (or didn't happen) is low-key in comparison to those shared above. "While we disagree with and are disappointed by the decision of the Senate Transportation Committee regarding the inadvertent exemption of funding to Special Districts, we appreciate the time and effort of the General Assembly during this Special Session," he allowed. "We remain available and committed to working with the Legislature, the Administration, our stakeholders and the business community to make certain that Special District funding is fully restored."

Why such a mild response? RTD will need support from Republicans like Grantham to patch up its revenue wound. But now the bleeding will continue through at least the end of the year and probably well into 2018.