Deadly falls at the venue, previously branded as Sports Authority Field at Mile High, occurred in both 2015 and 2016; the latter led to a lawsuit and an out-of-court settlement.

The first report of the most recent fatality came in a tweet from the Denver Police Department at 11:17 p.m. on July 30, referencing "an outside death investigation at 1701 Bryant Street" — Empower Field's address. At 10:54 a.m. August 1, the DPD offered this update: "An adult female guest at Empower Field at Mile High was sitting on an escalator railing, fell to the concourse below, and died as a result of the injuries. This is being investigated as an accidental death."

The passing of Francisco Morales after a fall at a September 13, 2015, Denver Broncos game was characterized in similar terms. According to CBS4 Denver, a hat belonging to a friend of Morales blew off his head and wound up on a nearby landing — and when Morales, whom the DPD described as "highly intoxicated," tried to jump to retrieve it, he plummeted onto a concrete ramp. He eventually died of his injuries. 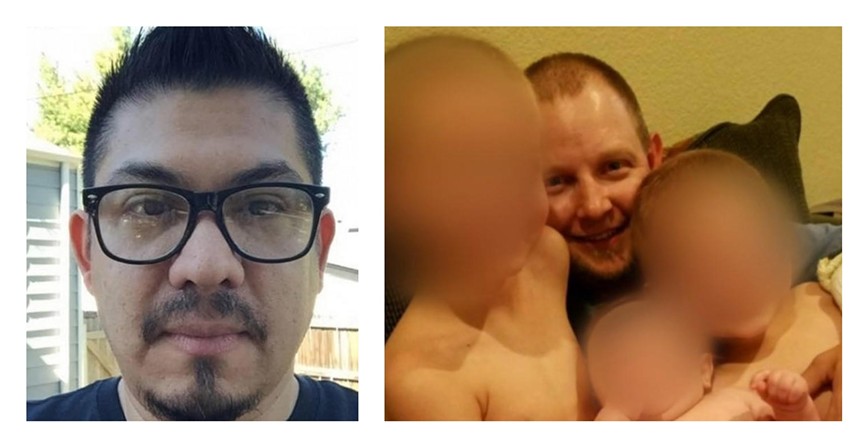 Francisco Morales, left, died at the stadium in 2015, while Jason Coy perished after a fall in 2016.
Family photos courtesy of CBS4 Denver
Jason Coy's death after attending an October 24, 2016, Broncos game was more complicated. He tumbled sixty feet after losing his balance while sliding down a handrail — and he was legally drunk at the time. The next year, his family filed a wrongful-death lawsuit against the Metropolitan Football Stadium District, various companies associated with the facility, and three unnamed people who served Coy alcoholic drinks.

The complaint is no longer online, but an excerpt from the document reads in part:


The Defendants, or either of them, knew or should have known that the subject fire escape corridor and staircase contained inadequate staircase railings, contained dangerous staircase components, and contained a dangerous open vault outside of the staircase step structure, which all constituted an unreasonable risk of injury or death to patrons using the subject staircase at the Stadium under expected and foreseeable circumstances.

The Defendants, or either of them, knew or should have known that the subject fire escape corridor and staircase structure contained an unreasonable risk of injury or death due to its design, maintenance and physical characteristics.

The Defendants, or either of them, knew or should have known that the subject fire escape corridor and staircase structure did not contain a required and sufficiently placed "guardrail" or stair step configuration to prevent patrons, such as Jason A. Coy, from entering a vertical chase outside of the staircase flight and to prevent patrons from falling several stories.

The Defendants, or either of them, failed to recognize the inherent risk of serious injury or death to patrons in maintaining an improperly protected staircase adjacent to an unprotected vault inside the fire escape corridor structure.

The Defendants, as landowner or land occupiers, failed to take affirmative action to protect the patron invitee public from serious injury or death resulting from falls from the open vault adjacent to its fire escape staircase, when it was reasonable and feasible to do so before Jason A. Coy's October 24, 2016 fall occurred.

The lawsuit was headed for trial in February 2019 when the parties reached a settlement; the details were confidential.

The Stadium Management Company at Mile High released this statement about the latest death: "We extend our deepest sympathies to the loved ones of the woman involved in the tragic incident that occurred at the end of Saturday's concert at Empower Field at Mile High. There is nothing more important than the safety of our guests, and Stadium Management Company is in communication with the Denver Police Department as it investigates this unfortunate situation."
KEEP WESTWORD FREE... Since we started Westword, it has been defined as the free, independent voice of Denver, and we'd like to keep it that way. With local media under siege, it's more important than ever for us to rally support behind funding our local journalism. You can help by participating in our "I Support" program, allowing us to keep offering readers access to our incisive coverage of local news, food and culture with no paywalls.
Make a one-time donation today for as little as $1.